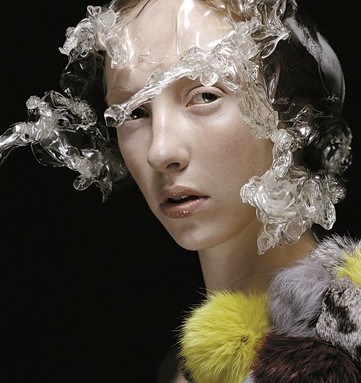 Covent Garden is the heart of London’s theater district, home to the Royal Opera House and street performers, and where King Charles II met Nell Gwyn. A veritable circus of activity and creativity, it’s the ideal setting for iconic milliner Stephen Jones’ atelier and boutique.

Head-to-toe designer dressing may no longer be in vogue, but Jones is divinely happy devoting himself to the apex of that style equation.

“Of course, in a way, you’re not clothing the body, but you are clothing the head,” the designer muses, breaking out into a mischievous grin. “And I’m sorry, Manolo [Blahnik], but you know the head is the most important part of the body.”

Apologies also must go out to the likes of Karl Lagerfeld, Marc Jacobs and Miuccia Prada. “Being a milliner is the most glorious thing you could possibly be,” Jones declares. “It’s just fabulous. Much better than being a dress designer, I think. It’s the cherry on the cake.”

London’s Victoria and Albert Museum would seem to agree as it gears up for the first major exhibition devoted to headwear to be held in the U.K. Three years in the planning, “Hats: An Anthology,” which runs February 25 to May 10, is a curatorial collaboration between the museum and Jones, and will illustrate hat design and headpieces from Egyptian times to the present day, including many hats from Jones’ own archives. The exhibition represents an, ahem, crowning achievement for the designer, who has clocked a quarter of a century in millinery, amassing a devout following of famous and not-sofamous clients, not to mention legions of designers including John Galliano, Vivienne Westwood, Emanuel Ungaro and Marc Jacobs.

An adjunct to the exhibition will be a book by Jones and Oriole Cullen, fashion curator at the V&A, with a forward by Galliano.

Jones arrived in London in the mid-Seventies from his hometown of Liverpool, England. The product of private schooling and a middle-class background, he graduated in 1979 from St. Martins School of Art. Originally, Jones apprenticed as a tailor at Lachasse Couture House, but the millinery workshop next door lured him in and he learned his trade under the expert tuition of Shirley Hex, also mentor to Philip Treacy, who, like Jones, became one of Princess Diana’s favorite milliners.

Situated on Great Queen Street since 1995, Jones’ boutique employs the double frontage windows to present his hats as works of art. Within, statuesque white-faced and swan-necked polystyrene busts rise up to show off his colorful and eclectic collections.

According to Jones, a hat is no longer only for formal occasions or for staving off winter chills. It’s an “accessory” that has become the repertoire of fashion.

“People dress for instant reaction, eye candy, the instant effect, and that’s what hats give you,” he explains. “They aren’t about deep meaning or hidden luxury. What you see is what you get.”

“He has an amazing talent for creating very wearable hats, but also of creating the most opulent hats of pure fantasy,” enthuses Dita Von Teese, adding, “He has impeccable taste, and a wonderful way of adjusting the scale of the hat in all the right places so that it’s perfectly suited to the wearer.” For full effect, Jones designs his hats to be viewed from 1 meter (a little more than a yard) away. “They are about intimate detail,” he says.

Galliano is just one designer who relies on Jones to top off his catwalk creations. Rei Kawakubo, the elusive Comme des Garçons designer, adds, “I always look forward to see what surprising creation he comes up with, and he’s a real gentleman, too.” The pair also have collaborated on a perfume, the launch of which coincided with London Fashion Week in September, and will be available exclusively at Dover Street Market. The expansion into perfumery is just another facet of his thriving business. Although Jones has been successful  since the early Eighties in London, it is thanks to the exposure of his name and his prominent designs on the runways of Dior and Marc Jacobs that he has entered the fashion world headfirst. “Sales have gone up in recent years because suddenly designers are making hats an essential ingredient of their look,” Jones says.

Not content with producing three collections a year (Model Millinery, Miss Jones and Jones Boy), Jones constructs creations that take the stage on tours of pop stars, be it the diminutive Kylie Minogue or Madonna for her latest Sticky & Sweet tour.

“Stephen Jones is a visionary artist that has reinvented millinery for a new generation,” says Madonna’s stylist, Arianne Phillips.

There is, however, hot competition with the emergence of milliners of a similar pedigree. “There are people coming through—quite a lot from the Royal [College],” Jones says. Notably there is Noel Stewart (who once acted as Jones’ apprentice) and Justin Smith’s bespoke millinery; Japanese-born Misa Harada, who, as well as legions of Japanese fans, counts Janet Jackson among her clients and has collaborated on runway shows for Thierry Mugler and Yohji Yamamoto, and, of course, Treacy.

But, in Jones’ upbeat view, the more, the merrier. Even today’s talk of a recession does not give Jones any headache. “Well, in a funny way, they’re unnecessary,” he admits, “which of course makes them such a necessary thing.”