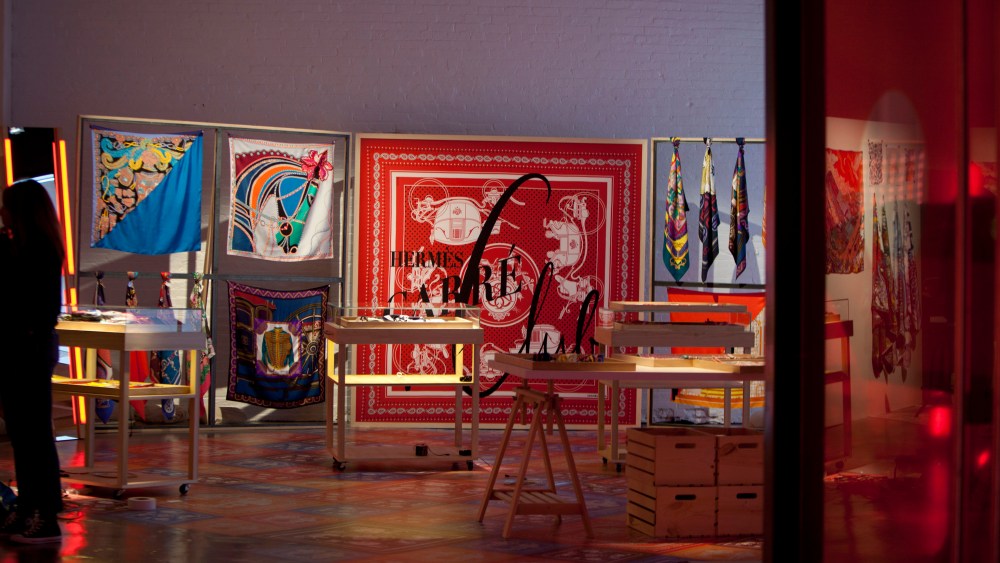 Scarves have long been a cornerstone of Hermès, and in recent years, the company has launched activations around the product, known as carré in French.

The latest is Hermès Carré Club, a showcase of the brand’s creativity and artistic expression as it relates to scarves. A pop-up at 459 West 14th Street in Manhattan opens to the public today and operates through Sunday. Carré Club’s next U.S. stop will be Los Angeles from Nov. 8 to 11. The activation also will open this month in Toronto and Singapore and travel to Milan in November.

Carré Club allows guests to transcend the four corners of the scarf and see firsthand how artists work within the parameters of a 19-inch-by-19-inch silk square.

“It’s a way to celebrate and have fun,” said Bali Barret, artistic director of Hermès women’s collections. “It’s about fantasy and storytelling and color and drawings. Being a very old house, people think that maybe we’re redesigning old scarves. The artists and illustrators are a very young generation. The scarves are very lively.

“After the computer, the younger generation is interested in hand-drawing again,” said Barret. Nearby, Edouard Baribeaud was working on an illustration for a scarf based on William Shakespeare’s “A Midsummer Night’s Dream” — Act 3, Scene 1, to be exact.

“It’s the first time I did a drawing that you can wear,” Baribeaud said of the scene, which features an enchanted forest, fairy queen in love with an actor who morphs into a donkey, tiger and moon. “The corners and borders are very important.”
Cyrille Diatkine, a Parisian illustrator who’s been working with Hermès for 15 years, sketches a person’s likeness in seconds with several sweeps of a marking pen. Ugo Gattoni, the creator of a horse named Mino that appears in every scarf he designs, has made his mascot move by animating it with the help of Jean-Simon Roch. Passionate about animals and wildlife, Alice Shirley draws a lively jaguar with Montezuma’s feathered headdress surrounded by Mexican butterflies.
“Look at this crazy machine. It’s a drawing machine,” said Barret of a 5-meter-long, 2.5-meter-high contraption that looked like something out of Charlie Chaplin’s “Modern Times.” The machine, which had an 18-meter-long sheet of brown paper running through it, was created by Octave Marsal and Théo de Gueltzl, who built it as their final project at Central Saint Martins.
“The color is a really important part of the scarves,” said Barret, referring to swatches of shades hanging on the wall. “Our factory in Lyons, France, has 15,000 colors. We’re asking guests to name them. That’s the poetic part.”
Carré Café offers coffee and club sandwiches, of course, at square tables printed with scarf patterns. A karaoke booth with a square disco ball, called Carré-OK, sets animated scarves to tunes such as “Love Me Tender” and “Don’t Go Breakin’ My Heart.” Next door at Carré Stories, Hermès recorded fans singing the praises of the carré. Guests can listen, and leave their own, if the carré moves them.
A pop-up shop filled with special-edition scarves represents new techniques for the house’s carré, such as embroidery and sequins to bring out details of patterns such as flowers or animals and patchwork scarves made from two designs sewn together or where part of the scarf is replaced by a solid piece of fabric, among others.
“It’s an exciting endless road because you always have new talents to meet, new ideas to try,” Barret said. “We’re celebrating the obsession of the square.”
Newsletters