The store’s wide range will be expanding this winter with a small collection of men’s hats and a recently introduced bridal selection. 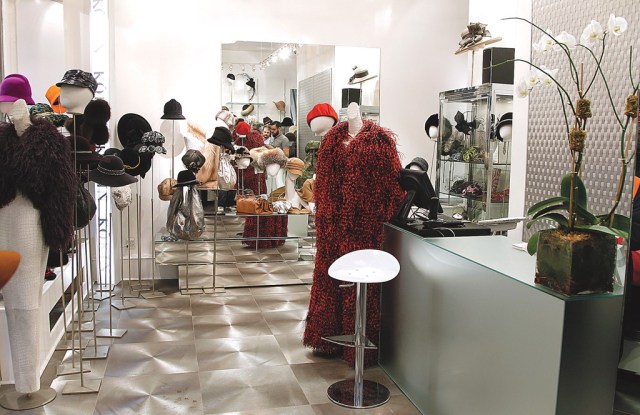 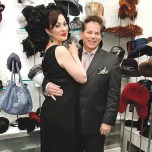 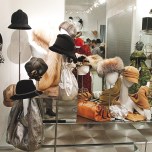 At his new store, Kokin feels more at home, even though it’s not much bigger or far from the previous site.

“I love this space. I love the high ceilings. The old one was too claustrophobic,” Kokin said last month, at the opening of the 500-square-foot shop at 1028 Lexington Avenue, between 73rd and 74th Streets, which replaced the unit on Third Avenue and 79th Street.

Most of all, he loves the enhanced ability to present his full scope of product. “I have things in my own store that no department store would buy from me. Retailers buy safe. They’re worried about taking a chance. In my store, I can show all the things I do. Marisa Berenson, Joan Collins, and a lot of the socialites that shop here, they would never find what they want at some of the stores I sell to.”

His store’s wide range will be expanding this winter with a small “funky” collection of men’s hats, including fedoras and pork pies, and a recently introduced bridal selection. Kokin is known for his fur trapper hats, which start at $695, but in python are priced at $2,000.

Overall, the women’s assortment starts at $145 for a beret with silk flowers or found articles, and goes all the way up to couture, special occasion styles that can be priced as high as $5,000 for something in sable or with hand-painted silk flowers. There’s also a sprinkling of accessories, including evening wraps priced from $750 in embroidered organza, to those in French lace and Swarovski crystals for $4,295. Rounding out the assortment are handbags, either designed by Kokin or bought from Europe, as well as evening gloves and quirkier creations such as an ostrich feather coat, $3,995, or the big “kangaroo” nappa hobo bag with an extra elasticized pocket in front.

“We’ll customize anything to match a coat, anyway you like it,” Kokin said. “If you get a piece of gum stuck to your shoe and you like the color, we’ll match it. We can customize anything. It’s made right here in New York and we have a fast turnaround. We’ve created hats for a funeral the next day.”

Kokin has just one shop, and his wholesale volume exceeds the retail volume, though the retail business is getting bigger. Last May, he opened a pop-up shop inside the historic Seelbach hotel in Louisville, Ky., in time for the Kentucky Derby. He’ll do it again next year, he said. He’s also considering another store in Manhattan. SoHo would be his first choice. “On all those small side streets there, there are lots of little shops and lots of turnover,” Kokin said.