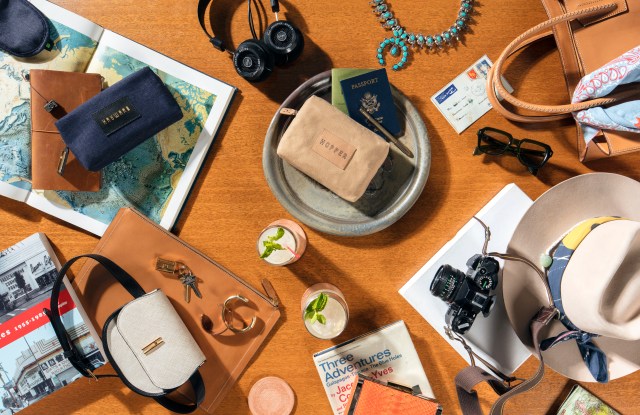 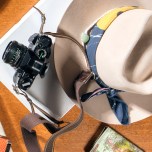 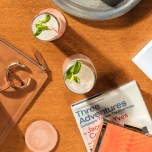 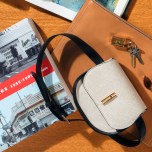 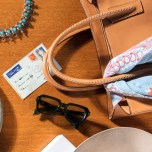 The idea for Marin Hopper’s latest collaboration for her Hayward and Hopper accessories lines came at about 30,000 feet.

The bicoastal designer had already mastered her cross-country flights on JetBlue’s new Mint first-class service between New York and Los Angeles. “I take the 11 p.m. from New York so I can have dinner [first],” she related with detailed precision. “I arrive in L.A. at 1 a.m., sleep, and do a full day’s work before jumping on the 4 p.m. back to New York.”

She was impressed with the airline’s new Mint class and schedules, as well as with its collaborating partners on in-flight service — it serves food from Lower East Side haunt Saxon + Parole, baked goods from Village Bakery and Mah-Ze-Dahr, and offers Grado custom headphones made in Brooklyn — all part of its “Made in New York” program. But when it came to the somewhat inconsistent amenities kits, then delivered in cardboard boxes, she thought they could use an upgrade, and developed a reusable kit.

The designer created two styles using favorite design elements from her brands, denim for Hayward’s women’s dust bags, and tan canvas for men’s. She also incorporated hardware details such as the lean metal “H” that appears on the zipper pull of the women’s version’s and the thick stitching that makes up the letter “H” on the men’s style.

The bag contains products made in the U.S., if not specifically in New York, including Noyah lip balm, Herban Essentials towelette, Hint Mint cinnamon breath mints, earplugs and a coordinating fabric eye mask made from either denim or canvas. The airline had one request: to include a cloth wipe for tech screens and eyeglasses. Hopper took the opportunity to include some of her family’s classic images — such as mother Brooke Hayward donning a thrift store crown (complete with tag), and father Dennis looking uber-cool in a pair of shades — printed one side of the cloths. The designer hopes to expand the reusable pouches by introducing a wristlet style for women and versions that incorporate the artwork of Alia Penner printed on the fabrics, including the eye masks. Items in future pouches could include socks and a toothbrush kit.

Jamie Perry, vice president of marketing at JetBlue, said he knew Marin Hopper and her husband, John Goldstone, personally for years before the collaboration materialized. After visiting the Hayward House store on East 70th Street, the airline was convinced to rethink its amenities kits. Hopper and Goldstone also extend  the “Made in New York” concept to Hollywood, as their brand has roots in both cities. Said Perry, “As Mint service grew beyond its New York roots, we were conscious that we wanted to stay true to our New York heritage, but also start to introduce elements of other Mint cities.”

According to Hopper, the brand and the airline are both aligned with a similar concept of affordable luxury.

For Hopper, the whole experience of the new flight service and collaborating was like “coming full circle.” Her grandfather Leland, whom Hopper credits for her design inspiration, embodied the bicoastal life in the golden age of flight. She said he was “an adventurous, stylish aviator and traveler” who also sat on the board for TWA in that airline’s heyday. Hopper said her grandfather was a frequent flier on TWA’s New York-to-L.A. flight, which was so glamorous, “there was a red carpet rolled out to board the plane.” While the carpet is long gone, Hopper is doing her part to return an element of comfort and glamour to flights between East and West Coasts.