Pieces of the Puzzle: Rocawear Accessories

Women’s products all go together with the apparel. 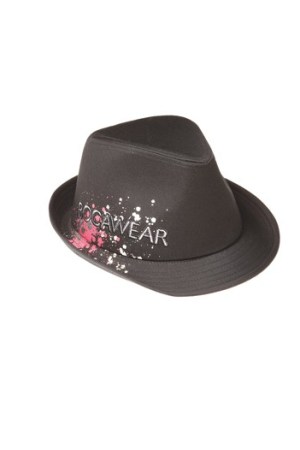 “He comes up and the first thing he did was ask our receptionist if this was a nice place to work,” Hafif said. “I think that speaks a lot to his character and what types of people he likes to do business with.”

What Carter wanted, according to Hafif, was a headwear collection that extended beyond the classic six-panel baseball cap. He wanted to inject a fashion element into the line, such as fedoras, “newsboy” ivy hats and knitted caps.

“I was impressed with Jay’s knowledge of current trends in accessories,” Hafif said. “He was right on point.”

Hafif isn’t the only one impressed by the “Jigga Man.” According to many of Rocawear’s licensees, Carter has been immensely involved in helping turn his apparel line into a full-fledged lifestyle brand, with a wide assortment of men’s, women’s and children’s accessory categories.

Rocawear’s vice president of licensing, Denise Grande, said when she joined the firm six years ago, it had five licenses. Today, it is owned and operated by Iconix Brand Group and boasts 18 licensed partnerships, including footwear, socks, intimates, eyewear, handbags, jewelry and even virtual presence in the online world, all of
which harkens back to the core of the brand.

“The strength of the brand is Jay-Z being behind it, but also the passion we have for the product,” Grande says. “I didn’t come in and look at our list and say, ‘We don’t do Kleenex yet.’ We’re fussy about product and what fits with our customer.”

For example, she added, “With our footwear, we worked with Jay for almost a year before we developed a boot, or a pair of sneakers. We don’t want to have just anything with our name on it.”

Grande estimated Rocawear’s licensing business stands at $650 million retail, $40 million of which is from international sources, with Canada and the U.K. leading overseas sales. When Rocawear launched, the business was predominately a men’s label. Now, thanks to its wealth of licenses, women’s merchandise comprises about half of the volume.

The strength of these categories lies in the idea that every ancillary product ties back to the clothing and the Rocawear vision. Carter’s design team works closely with licensees to outline that vision and ensure the accessories stay true to the brand.

“Clearly the inspiration comes from the apparel, and what we’re doing is creating a unique connection to clothing,” said Todd Marcus, vice president of sales and marketing for K&M Associates, which manufactures Rocawear jewelry. “Consumers appreciate and look forward to accessorizing their clothing with the jewelry that complements the line. We attempt to be true to Rocawear customers in what they’re wearing — what the jeans
look like, what the shoes look like — and integrating our look and feel into what’s going on in the world of Rocawear.”

Retailing from $8 to $60, Rocawear jewelry features chunky styles and strong, gold-tone influences that recall the women’s apparel. It retails at Macy’s, Citi Trends, Underground Station and on various e-commerce sites. The line launched last fall and, according to Marcus, has exceeded minimums in its first year out.

“People have been saying for years that the urban market is getting more challenging and on a downtrend, but my business has been growing every year since Day One,” said Paul Kubie, vice president of sales and marketing at Gina Group, Rocawear’s legwear producer. “It all comes back to understanding the DNA of the customer, who he or she is, and it’s putting out a quality product at a reasonable price and understanding how the customer has evolved or changed over the years.”

Kubie said Rocawear’s legwear business is up 30 percent over last year and expects 2010 to surpass all expected sales figures. Rocawear socks are divided into athletic and fashion lines for men and women; women’s styles are 65 percent of the offerings. Prices run from $5 to $15 retail, and the product is distributed through Dr. Jays, Jimmy Jazz and urban specialty stores.

And with a top-selling rap artist touting the label’s wares at sold-out shows all over the country, Rocawear’s licensees acknowledged they are sitting on a brand juggernaut.

“Rocawear represents the top in terms of a brand, they’re at the top of the index factor and that makes them important,” said Michael Bannout, president and ceo at M.London, which produces Rocawear’s handbags. “Jay’s endorsement and being behind the brand has so much to do with its success. His vision of the brand and the apparel has been so strong that it helps us create an extension of that business.”

Consumers even want a piece of Rocawear in their alternate lives. According to Grande, Rocawear sold 8,500 units of product this quarter in virtual, online worlds such as Outspark, Meez and Wii World. While this type of outreach nets only about $10,000 per quarter, Grande emphasized its strength as a marketing tool.

“People actually pay for it and it’s only an image,” Grande said.

This is not to say that the company hasn’t experienced fallout from the recession, but in these unstable times, Grande and the Rocawear team view their licensing business and wide range of distribution channels as a source of safety. In an effort to reach even more stores, she said the firm may launch a derivative apparel line for athletic retailers.

“We are looking at how we can expand into other channels of distribution based on our strengths. Maybe it’s an active channel we’re not in right now,” Grande said.

Either way, consumers believe strongly in the brand and what it represents — the lifestyle and music of hip-hop icon Jay-Z.

“Rocawear is a way of life and it continually reinvents the pulse,” said Rhona Hutton, vice president and head of design at Colors in Optics, which produces Rocawear eyewear. “It defines the lifestyle for today’s consumer.”