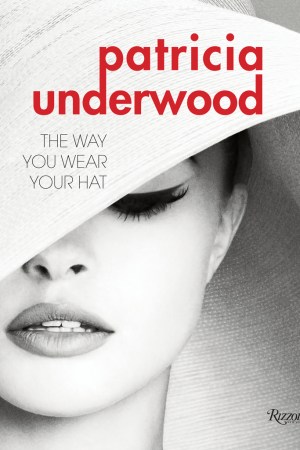 Don C Collaborates With GMC Hummer on a Snapback

Patricia Underwood’s four-decade-long career will be celebrated this spring with the release of a retrospective Rizzoli book. “Patricia Underwood: The Way You Wear Your Hat.” The tome — compiled by Jeffrey Banks and written by Doria de la Chapelle, with a foreword by Isaac Mizrahi — chronicles Underwood’s diverse designs and experimentation with shape, material and color.

The title’s stack of archival images by photographers including Bruce Weber, Annie Leibovitz and Irving Penn, display Underwood’s love for collaboration: With the fashion designers for which she creates custom runway pieces, as well as the everyday woman — whose evolving needs Underwood considers to be her main focus.

“The idea was really to show the hats in action — hats being used or how a hat would be part of an image, not just an item on its own. It was about seeing them in context and situations because that’s how people who buy my hats wear my hats — they really wear them,” Underwood said of the title, which will be sold in fine bookstores as well as on HSN.

The designer, who started her hat business in 1973, has operated on a primarily wholesale basis since the beginning. Underwood says that it’s this model — retailing directly to shoppers on the floor of luxury emporiums like Bergdorf Goodman — that has made her acutely aware of the ebb and flow of fashion trends as well as consumer preference.

“My shapes are classic — there is not a lot of stuff on top, so over time the shapes evolve, proportions evolve — according to fashion,” she noted.

Underwood has endured fashion’s undulating interest in headwear firsthand for the past 42 years. Millinery — an art form typically most enjoyed by those who find comfort in dressier attire — was not at its peak during the particularly casual Seventies, when Underwood founded her brand (which was called Hats by Lipp at the time).

“The retail environment has changed so much [over time],” she said. “When we started in 1973, a lot of stores didn’t carry hats — stores like Lord & Taylor had eliminated their millinery departments. Nowadays, you can hardly find a hat in a store.”

Business revved up when the Eighties’ more-is-more formalwear styles gained widespread popularity. “In the Eighties it was boon time, we had our own department at Bergdorf Goodman, in those days we had almost three-quarters of a million dollars there per year — we were just cooking,” she recalled.

Today, Underwood primarily retails in specialty shops like Jenni Kayne in Los Angeles and Upper Class Hats in Cedarhurst, Long Island. She has found a niche clientele among orthodox and Hasidic Jewish women, who cover their heads out of religious observance. Luxury department stores, Bergdorf’s included, continue to stock Underwood’s designs — particularly for the winter. She has also begun selling directly to consumers through her New York atelier, with the most devoted clients purchasing between four and five pieces per season.

Unsurprisingly, Underwood considers herself something of a hat evangelist. “If somebody wants a hat, I’m not saying no,” she said, but was quick to note: “I think we only once said no to someone who wanted to use hats in a pornographic film.

“There are so many great hat-dedicated consumers out there who wear great clothes and have great style. It’s not what’s on top of the hat, it’s what’s underneath that’s important for me. How she can be enhanced and fit hats into her lifestyle.

“It’s the brain underneath the hat that’s important for me and how the hats go with the clothes.”

It’s this symbiotic relationship between hats and apparel that continues to inspire Underwood in her collaborations with a roster of ready-to-wear designers, which has included Ralph Lauren, Marc Jacobs, Oscar de la Renta, Donna Karan and Calvin Klein.

“I believe hats are made to go with clothes,” she said. “Each designer has their own point of view for me as an accessories designer to consider as I create pieces to coincide with their work.”

That process led to a fall collaboration with Ralph Lauren, of which Underwood is currently overseeing the production. She has also created a hat to sell on HSN alongside the Rizzoli title, which will air on May 7 at 10 p.m.