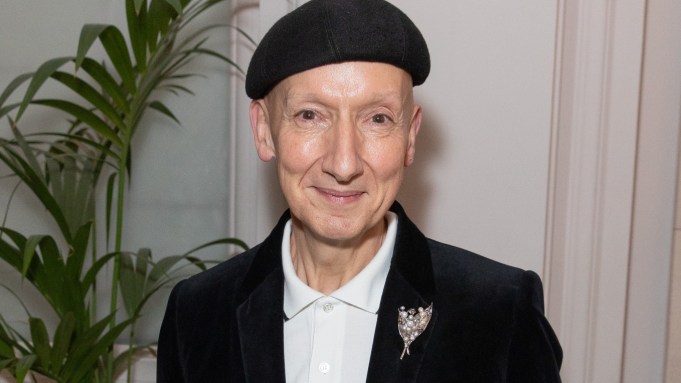 BACK TO BLACK: How to market a new season’s collection, deal with an onslaught of bespoke orders, and mourn the queen’s death at the same time? Milliner Stephen Jones found a way to do it all, with style.

Jones showed his spring 2023 collection with a series of in-store appointments during London Fashion Week. Called El Morocco, it was a wink to the traditions, architecture, and colors of the North African country (where he’d recently taken a holiday) and to the ’50s New York nightclub of the same name.

The collection, which also featured an exclusive, painterly print by the Moroccan artist Khalid Benkaroum, was a fun fusion of Jones’ aesthetic and the country’s cultural motifs.

Delicate fez-style tassels dangled from wool berets, while embroidery on the brim of a hat resembled the golden swirls on Moroccan tea glasses. One straw hat as flat and round as a dinner plate had a miniature fez detail on top, while another design had a brim and chic flaps at the side and back to keep the desert sun at bay.

Jones loves Morocco and has a long history with the fez. He was wearing one in Culture Club’s “Do You Really Want to Hurt Me” music video. That’s when Jean Paul Gaultier spotted Jones and asked him to be in his next Paris show. The two started working together regularly after that.

The splendors of Morocco were on show in a private area of Jones’ Covent Garden store. By contrast, at the front of the store, every hat on display was black, and Jones has been wearing the shade during the national mourning period.

“It has been strange working on a fashion collection” at the time of the queen’s death, said Jones, adding that fashion takes on more importance at times like these because it offers a dose of joy and optimism.

Jones has also been dealing with the millinery needs of other mourners. The designer, who counts the Duchess of Sussex among his many clients, said the orders for funereal black hats started coming in “around half an hour” after the death of the queen.

“Well, there are not so many milliners around, and people knew they needed to prepare. The Commonwealth countries, in particular, are hot-wired into the British sensibility,” said Jones, referring to the political association of countries that were former territories of the British Empire.

Asked what sort of hats he designs for funerals, Jones said he favors felt over satin, and sometimes adds a veil. “They’re appropriate and sometimes useful,” said the designer, adding that the approach to a funeral hat is different, with clients putting a lot of thought and care “into how they will appear” rather than taking a risk, or making a fashion statement.