Hats — colored, ornate, bow and ribbon-laden styles in all shapes and sizes — were the must-have accessory for wedding attendees.

By Rachel Strugatz on May 2, 2011
View Slideshow 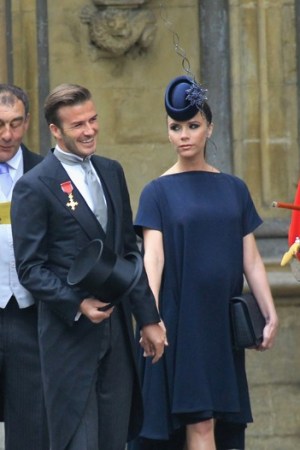 If Kate Middleton’s wedding dress will spark trends, so will the millinery seen at the royal wedding on everyone from mother of the bride Carole Middleton to the three Spencer sisters to Joss Stone.

Hats — colored, ornate, bow and ribbon-laden styles in all shapes and sizes, especially those by royal milliners Philip Treacy and Stephen Jones — were the must-have accessory for wedding attendees, ushering in a potential revival of the often overlooked item. Spain’s Princess Letizia, Zara Phillips, Chelsy Davy and Victoria Beckham were among the other VIPs who topped off their attire with stylish lids. Treacy certainly helped to ignite what is sure to be a renewed interest in the accessories trend. More than 30 of his custom creations were worn by guests including Princess Diana’s nieces — Lady Amelia, Lady Eliza and Lady Kitty Spencer.

A very pregnant Beckham, in a short-sleeved navy blue dress modified from her fall 2011 collection, wore a petite, Treacy hat of the same color, tipped at the front with ribbons cascading down her face — showcasing her hair in a high ponytail — and David Beckham was dapper in a black top hat. Also wearing confections from the milliner were Princess Beatrice, who opted for a neutral, blush-colored headpiece with an oversize, sculptured bow, and Princess Eugenie, in an electric blue hat adorned with champagne feathers and eggplant-colored flowers.

“It’s great to see a lot of younger clients wearing hats that are chic and stylish. I think for a younger generation — somebody in their 20s — they will see that there are many hat options and a world outside a baseball cap, a little fedora or a beret,” Jones told WWD. The designer was responsible for hats seen on Viscountess Serena Linley, Lady Sarah Chatto and Santa Sebag Montefiore (sister of Tara Palmer-Tomkinson).

For a Roland Mouret-clad Linley, Jones described the cream and blush Fifties-inspired petal hat he fashioned for her as having a “very traditional silhouette but with modern materials” — because instead of actual flowers, petals made from resin were used. Of the hat worn by Brit “It” girl Montefiore, Jones called the magenta rose and feather halo hat “a cartwheel in ostrich feathers,” whose petal colors just happened to match her Christian Dior dress and mink stole.

Carole Middleton stirred up quite a bit of head-related controversy last week when it was reported that milliner Jess Collett, commissioned to create Mrs. Middleton’s hat for the big day, was relieved of her duties with less than a week to the wedding. The mother-of-the-bride wound up wearing a powder blue topper fashioned by Berkshire-based milliner Jane Corbett.

And Vivien Sheriff, a Wiltshire milliner, was responsible for the headgear on sister-of-the-bride Pippa Middleton and Davy. Queen Elizabeth II, never seen in public without a hat, wore a classic, yellow Angela Kelly style that matched her dress and coat.

This is the first time in decades that hats are expected to markedly make a comeback, and milliners are rejoicing. American hat designer Eugenia Kim already thinks Kate Middleton has impacted the hat trend, and has seen a recent increase in demand for her ornate pieces from buyers.

“We just started doing a lot more fascinators due to popular demand, and I think it’s a direct correlation to Kate wearing them and the Middleton-mania leading up to the wedding. It’s more about Kate, rather than the wedding,” said Kim, whose six-piece royal wedding-inspired collection of ostrich plume, pressed velvet and silk taffeta and tulle flower fascinators and bridal accessories hits Net-a-porter today, retailing from $450 to $750.

“I do think a lot of the guests were modeling themselves after her — she always dresses so classically English, but also in a modern way.”

Jones believes the trend really will hit the states next spring. He doesn’t expect crowds of Americans to start springing up in big, formal, sculptural hats come fall, but he thinks they’ll warm up to the whole idea of spring millinery this time next year.

Milliner Albertus Swanepoel has already seen an upswing in his retail business. His wholesale orders have been steadily climbing every year, but he hopes the royal wedding, which he called “an amazing day for millinery,” will encourage more American women to start wearing hats.

“Women are obsessed with the latest bags and shoes, and hats are the last thing they think about. Very often in the press, it’s hats that get the most criticism — it’s always the ugly hat, not the shoes,” Swanepoel said. “The poor hat always gets a bad rap, which is unfortunate. I wish that Americans and women in general can see that they can look fabulous in a hat and that it does add character and personality to your outfit.”

New York City-based milliner Suzanne Newman, who founded her Upper East Side boutique, Suzanne’s Couture Millinery, 26 years ago and has made hats for the late Princess Diana, Steven Tyler, Beyoncé and Tina Knowles and Kate Hudson, has seen “overwhelming success” this season. Several of her hats appeared on guests at the royal wedding, including Deborah Norville.
“Women have become more confident to wear hats because of the wedding. I think it’s a general trend right now, but Kate is certainly helping it. It started to pick up [recently], but she certainly boosted it. She is just perfect. She is just what Britain needs.”