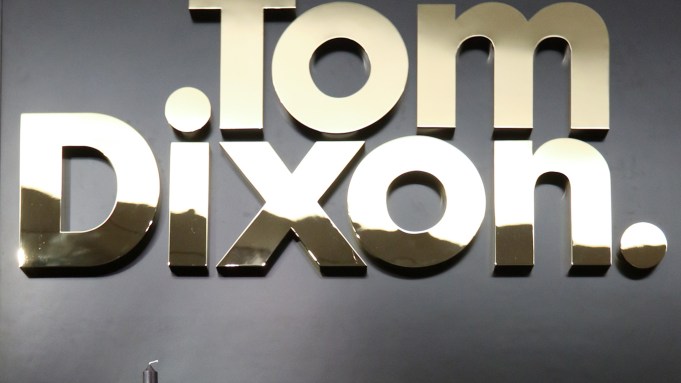 SEOUL — British industrial designer Tom Dixon stopped here this week to attend the launch of his brand’s pop-up accessories shop in Cheongdam, the city’s luxury district. The opening was held inside a section of Boontheshop, Dixon’s first-ever collaboration with the local fashion and designer anthology shop that is owned by Shinsegae Department Co.

Sombre black walls and floor displays were set up in the main shop area, Tom Dixon’s signature gold logo mounted at the top. A small group of Boontheshop executives and VIP shopping clientele gathered for the meet-and-greet with Dixon.

According to Dixon, the launch of his accessories collection in Seoul invites Koreans to enter his world. “The idea was always to do accessories,” he said. “But we didn’t want to be an accessories brand — we wanted to be a whole universe.”

At the event, notebooks and stickers were popular items among the pop-up shop’s collection, Dixon’s trademark charcoal diffusers took center stage, as attendees mused over the scented glasses.

“Recently accessories have been taking off, and it means we have access to a different clientele…as well as more success in Asia because people [here] particularly in Korea, have much smaller houses….It’s a different way of buying,” he said.

In much of the world, Dixon argues accessories represent only a fraction of what consumers are seeking; whereas in Asia, the demand for accessories is much greater.

Dixon has been a fixture on the British design scene since the Eighties when he first created a line of welded salvage furniture. The designer is proud of his self-taught background in the industry, often citing that it gave him more liberties in designing. One of his best-known pieces is “Jack,” a plastic multipronged object whose shape has been employed in many of his furniture, art and lighting fixtures.

Dixon landed in Seoul earlier in the week to attend the Herald Design Forum on Tuesday, speaking alongside international experts in design including Randi Zuckerberg, a businesswoman and the sister of Facebook’s founder, and architect Shigeru Ban. Dixon noted his love for the local cuisine, as well as his admiration for the local interest and progress in design. “Korea is becoming more and more educated of a place….They’re interested in what’s going on outside….Koreans have always been very international,” he said.