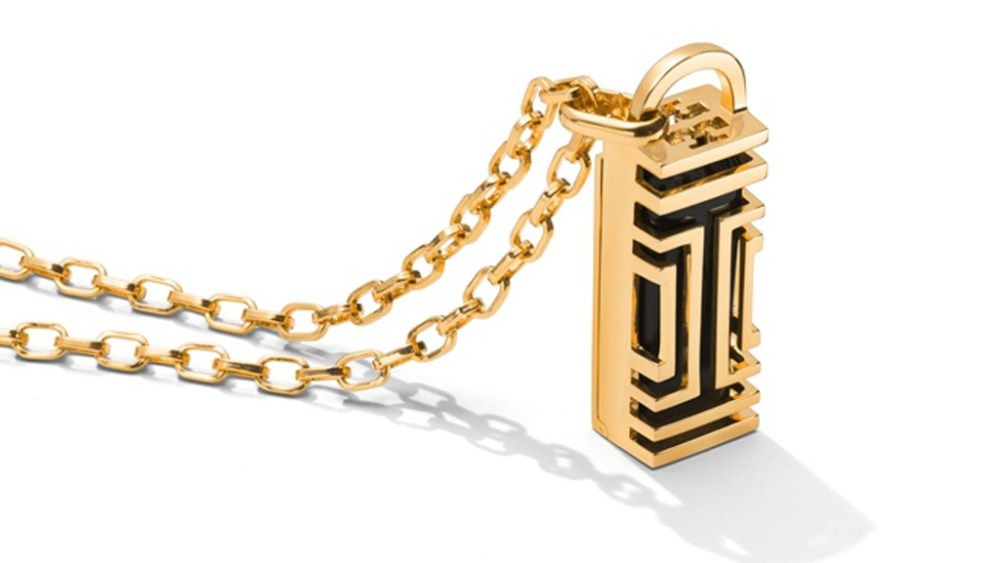 Not content to be relegated to just a tech item, the Fitbit fitness tracker is getting a dose of fashion, courtesy of Tory Burch.

The wireless activity and sleep tracker collaborated with the designer on a Tory Burch for Fitbit accessories collection, which includes a pendant necklace made of brass and based on Burch’s signature open-fretwork design, for $175. There’s a brass-metal hinged bracelet with open fretwork, $195, and a silicone printed bracelet in Burch’s signature colors and prints, $38.

“Wearable technology is an exciting new category, and we’re [pleased] to be partnering with Fitbit to offer a unique collection of accessories that transform the fitness tracker into a stylish piece of jewelry that is versatile enough to go from day to evening,” said Burch.

“From Day One, we’ve known that the form factor is crucial to creating a health and fitness tracking device that will fit into people’s lifestyles and become truly ‘wearable,’” said James Park, chief executive officer and cofounder of Fitbit. “We designed [Fitbit] Flex with this in mind, but our partnership with Tory Burch has taken wearable-device fashion to another level, transforming our Flex tracker into an elegant accessory. The user might have one Fitbit and multiple accessories, such as a couple of bracelets. We’re looking for a lot of different ways for users to wear their trackers to match their style, mood and activity.”

Fitness enthusiasts may be comfortable wearing a digital-looking device during the day, but if they’re going out, “the notion of one size fits all doesn’t work for a lot of people,” Park said. “We’re looking to further expand the ways our users can wear our products. This will ultimately help to inspire users to track their activity 24/7 and make healthier choices.”

Park said a lot of people on Burch’s team were already Fitbit users and understood the product. “We feel Tory Burch is the quintessential lifestyle brand. Everybody loves her chic accessories. The team had an incredible vision for the collection. The Tory Burch for Fitbit collection will be around for a while. We see this as a long-term strategic partnership,” he said. “This partnership is the first between a fashion brand and a leading fitness-technology company, and that’s what makes it notable.”

Fitbit Flex tracks such stats as steps taken, distance traveled, calories burned, active minutes and sleep, and it syncs wirelessly via Bluetooth to more than 60 leading iOS and Android devices, for instant data and progress.

According to the latest NPD Group Retail Tracking Service report, Fitbit’s unit share of full-body activity trackers was 69 percent in the first quarter of 2014. International Data Corp. said wearable computing devices will reach 19.2 million shipments by the end of 2014 and fitness-related accessories like the Fitbit tracker, will lead the wearables market through 2018. IDC predicts the wearables market growing at a compounded annual rate of 78 percent for the next several years, doubling roughly every 11 months.