The line will be unveiled at designer's Fashion Week presentation tomorrow. 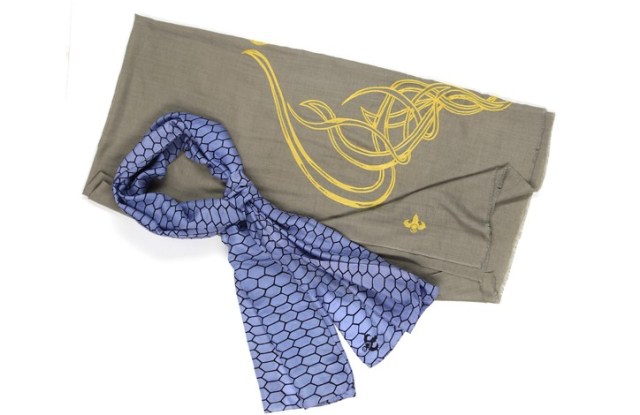 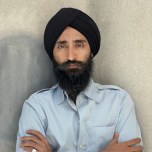 NEW YORK — Jewelry designer, actor and social Waris Ahluwalia is sticking his neck into the fashion circus with a colorful launch of scarves.

In vivid blues, greens, pinks, yellows and grays, the wraps are in embroidered cashmere and silk and the techniques used to create them are sourced from India, where Ahluwalia was born.

Ahluwalia decided to expand his label, the House of Waris, for practical reasons. “I’ve got to grow the business…and jewelry is a very costly business,” he said. “I don’t know if you’ve noticed, but gold is expensive, so right now my cost of production is outrageous. What I wanted was another category which didn’t cost as much. It’s still expensive. Cashmere is expensive, but not compared to gold.”

He added, “And I do wear scarves, I love scarves, and it’s materials, it’s textiles, it’s the same sort of raw materials…they all get worked into beautiful things.”

Like his jewelry, Ahluwalia said the designs were inspired by “love and history. I don’t understand either of them, but that’s what keeps me coming back.”

The House of Waris scarves will retail from $300 at Barneys New York, Maxfield, Colette in Paris and Dover Street Market in London. It’s a far lower price point than his fine jewelry collection, which has an opening price of $2,000. Ahluwalia has worked with several collaborators, such as Yoox.com and A.P.C. on a few projects such as mugs and beach towels, but has never offered an accessible price point under his own label.

Ahluwalia launched his fine jewelry line in 2006, despite no training (his parents had hoped he’d be a doctor, “or at least a lawyer”). He spent months hunting down the right jeweler in India. “I went to India, oddly enough, with a recommendation from Dennis Freedman. And then the rest of it was [various referrals from] my rickshaw driver, then the brother of that guy, the sister of that guy…it was just a complete openness,” he recounted.

His jewelry is intricate, handworked, and based in gold, diamonds and rubies, with a strong design link to his Indian heritage. At the time of its launch in 2006, House of Waris sold on the fine jewelry floor of Bergdorf Goodman, the youngest designer among jewelry giants such as Verdura and Roberto Coin. (Bergdorf’s stopped selling Ahluwalia’s line two years ago.)

Ahluwalia hasn’t always been taken seriously by the fashion and jewelry crowd, however, largely as a result of his sundry creative endeavors (he’s a regular figure in all of Wes Anderson’s film work), and his active social life. “You can see from it what you want to see from it, it’s perspective,” he said. “What I have the privilege of being is in the middle of an entirely creative social class, that just wants to make things…it just so happens it’s going to be photographed, because that’s what it takes to sell things. So how can you cut through the noise, how do you cut through everything everyone else is trying to sell, so how does your brand stand apart?” he said. “Yes, I do like to go to glamorous places and party, but then I get to bed and I get up and I work and I build a company, but I do it on my terms.”