The single diamond solitaire no longer cuts it for the bride-to-be. 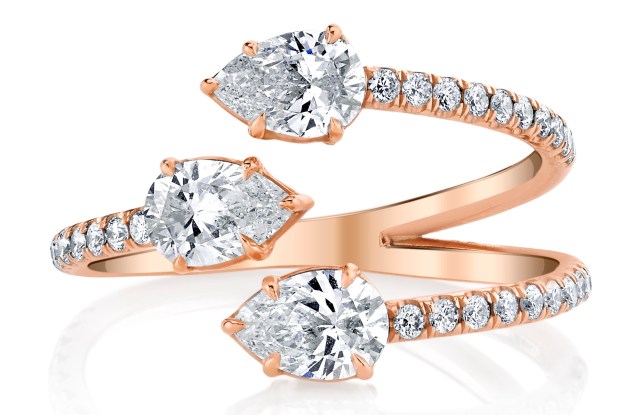 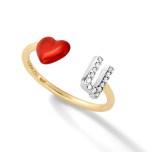 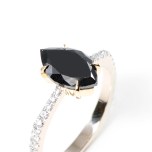 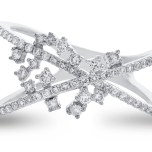 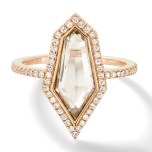 The fall 2017 bridal season yielded a bevy of unconventional brides — wedding pants, anyone? — and jewelers are also getting in on the action with new ways to interpret the diamond solitaire. The setting, traditionally associated with engagement rings, is revamped for a new generation of brides who want more customized wedding rings to reflect their personal styles. For instance, some designers are incorporating other stones, like a ruby on a Sidney Garber white gold and diamond ring, or a black marquise-shaped diamond on a white diamond pavé ring from Brazilian designer Ara Vartanian. Tina Craig of Bag Snob recently collaborated with Paris-based Nouvel Heritage for an emoji-inspired ring in rose gold and diamond. Alison Lou got playful with a red enamel heart and diamond pavé letter “U” on an open torque-style band.

The edgy bride also has plenty of options. Anita Ko’s 18-karat rose gold and diamond ring shows three are better than one, with pear-shape solitaires crowning the edge of a three-prong open ring. Graziela Gems has five emerald-cut diamonds flaring off the tips of the swoosh-style ring in between six prongs. Another Brazilian brand, H.Stern, gives pearls a place with an open six-prong yellow-gold setting that also features diamond pavé balls and a single stone on the tips. Known for her use of fossilized and unique stones, designer Melissa Joy Manning places a single Herkimer diamond in her signature four-prong claw setting. As the gem is not actually a diamond but rather a double “terminated” quartz stone, the price is also more favorable for today’s brides and grooms who might prefer to allocate the wedding budget elsewhere, such as on travel or a future home. Perhaps Ileana Makri captures a new sentiment and approach to a ring best: a simple pavé heart in 18-karat gold on a barely there band.