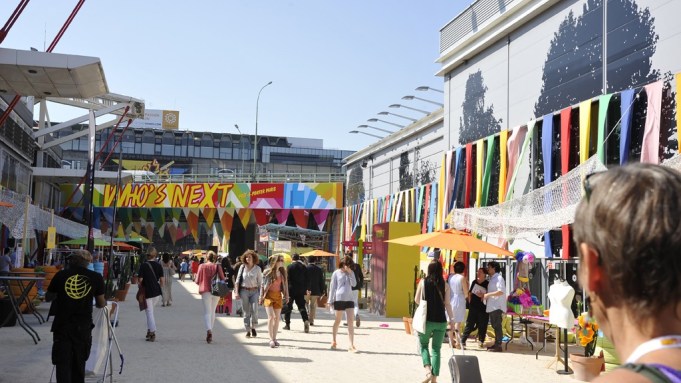 PARIS — Buyers were happy to find unexpected, eye-catching surprises at recent accessories trade shows in Paris and believed their category would continue to expand despite slowing European economies.

Accessories aisles were bustling at the Who’s Next trade show held in Paris July 6 through 9, and though several buyers said the sales this year had been sluggish, they felt the outcome would ultimately be positive for accessories. Overall attendance at the show dropped 5 percent this year compared with 2012.

Retailers from countries outside of Europe pointed to the volatile economy there, and looked for ways to lift demand.

According to Angela Nichol, co-owner of the Australian store Things of Desire, Australians feared the impact of the European crisis on their economy, and were spending less. However, “in reaction, we’re trying to get more exciting things, to take things up a notch so that what we have is more interesting for people to open their handbags for,” she said.

Nichol added that the collection by the Dutch jewelry brand, UTZ is “so fun, and handmade, so when you put them on they sell maybe three pieces at once, because they look beautiful together, and it’s unusual.”

The president of the major Taiwanese department store chain, the Far Eastern Retail Group, Nancy Hsu, said she was expanding the accessory category, “which is becoming more and more important, because you can change a few accessories, and you change the total look, so you can save money.” She said the Taiwan chain depends on local shoppers, but she expects Mainland Chinese tourists to increasingly visit the store.

Hsu predicted next season would see “a lot of cute styles” in accessories, adding, “I loved Les Nereides, the French brand with a lot of little charms and things. I think it’s nice, good quality, cute. It makes your life happier to look at those small things.”

Strong bohemian and Mexican themes were among the major trends at Who’s Next, including larger jewelry pieces that could counterbalance basics like t-shirts and jeans. Other trends included necklaces and bracelets that can be stacked together, as well as handcrafted wares using high-quality materials.

“Jewelry was either refined and elegant or bold and impactful. Our customers respond well to statement jewelry, as it is more impactful online than finer designs,” Charlotte Southern, buying manager for Net-a-porter’s sister site TheOutnet.com.

“Women across the globe are embracing sites such as TheOutnet.com where they have the opportunity to shop product that fits the ‘buy now, wear now’ mantra. Weather definitely plays a huge part, and with colder temperatures and heat waves lasting much longer in many parts of the world, women want to be able to invest in certain products throughout the year regardless of the season.”

Many buyers said they were looking for their usual, reliable brands, but were pleased to come across a few standout collections.

Liberty PLC buyer Ruby Chadwick said she visits Who’s Next every season mainly to visit the same scarf and jewelry brands, but was especially impressed with the relatively new Japanese brand Manipuri. “They do a really lovely take on vintage scarves, but in a new, modern way, on a big, oversized style. It’s really unusual and fresh, and we really like it,” she said. She was also struck by a collection by Yarnz, for their “quirky, more poppy illustrations, which are really nice to see.”

“Our scarf business is particularly on fire, so we’re really having a good time,” she added, noting business in general “is really great.” Some trends she noticed at the show included “a lot of pops of color, brights, summer neons especially coming through in scarves, and quite a lot of tongue-in-cheek brands.”

Michele Singer, owner of the store Marcoz, in Antwerp, Belgium, agreed a lot of the brands were showing “safe” selections of styles, but she easily found a few gems, including the bright and colorful hat collection by the Belgian brand My Bob Hats, at Who’s Next, which exemplified a strong trend in bold-colored Panamas. “It’s fun, it’s classy, it’s a wow. When you see them, yeah, you want to have them,” she said.

Some other standouts at the show included the newly launched leather bag line by Maroc’n Roll, a brand created three years ago in Marrakech by designer Robert Merloz, who formerly worked in the Yves Saint Laurent studio. He showed a new line aimed at an international audience, inspired by the world of Islamic mosaics and the artisanal traditions of Marrakech, yet adapted with a modern, clean geometric elegance in both the motif and the overall form. Key design elements on the bags, such as shapes in the form of zelliges, are handcrafted in Marrakech, and then assembled together industrially. The first collection comes in basic colors of black, beige and terra-cotta, with touches of gold, white, silver and red.

Zoe Lugo, designer of her namesake line, showed her unique, handwoven and hand-knit collection of bags made from a local Indian plant, known as figue. The Puerto Rican designer, whose collection infuses texture and bright colors, said she doesn’t shy from making a big statement. “I’m not scared. I’m aggressive about color. People reach for them like they’re candy,” she said.

Milena Zu showcased a jewelry collection that could have passed for an art exhibit of sculptural, handwoven metal mesh and beading, in the form of necklaces and cuff bracelets, plus twisted silk necklaces that were almost scarflike in their thickness.

The Italian brand, Emanuela Biffoli showed an elegant, ladylike new line of limited-edition bags made out of vintage upholstery fabric, some of which was collected from old Italian trains.

The British brand, Star Mela hit on the Mexican and ethnic boho trend, and said it couldn’t write orders fast enough for their collection of beaded bags, clutches and hats shown alongside women’s wear.

“I’m looking for something different from the usual, something edgy and young and colorful and bright, that puts you in a happy mood. And Star Mela has a lot of really nice styles, with nice taste,” said Maria Psifi, managing director of the large Greek chain Achilleas Accessories. She said business “was holding on” despite the Greek debt crisis, and that her budget hadn’t changed. She also agreed with many other buyers that Who’s Next’s Mexican theme and various animations, including an outdoor fashion show with vintage cars as decor, were impressive.