Turkey is known for its Grand Bazaar, melding of cultures and flavors, and its fine jewelry.

By Sophia Chabbott on May 4, 2009
View Slideshow 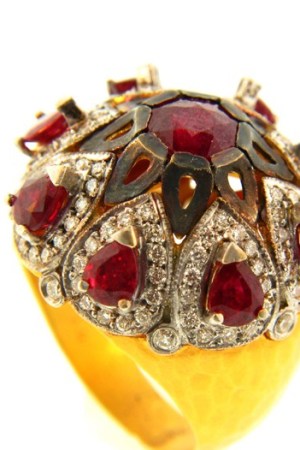 Turkey is known for its Grand Bazaar, melding of cultures and flavors, and its fine jewelry.

The fine jewelry industry has found itself captivated by Turkish jewelry in the last few years, with exports such as Sevan’s intricate handmade diamond and gemstone rings with sterling silver over high karat gold and Likya’s inventive motifs, such as a ring depicting a chick hatching out of a silver, gold, diamond and sapphire-covered egg.

Atelier Minyon is aiming to give the Turkish look an even wider audience. The company is the brainchild of Elizabeth Genel and Mark Nyman, the couple who founded JD’s Cosmetics, a 12-year-old beauty and skin care chain in the Northeast. When Genel became pregnant with the couple’s child, she started to collect fine jewelry. After consumers asked to buy the jewelry, Genel — a lawyer who has worked in the beauty arena for 20 years with stints at Clinique, Saks Fifth Avenue and Estée Lauder — began to sell some in her beauty stores. Nyman was a commercial litigator before going into the cosmetics industry with Genel.

“I thought ‘I love buying clothes, but I just want to buy jewelry,’” said Genel, who has been carrying brands such as Mizuki, in addition to antique pieces, for the last six years.

The pair decided to further steep itself in the fine jewelry market by starting a retail brand. They met with Turkish jewelry and business owner Alp Sagnak a year ago and the trio joined forces to launch Atelier Minyon, which opened its first store on Spring Street in SoHo in late fall.

The jewelry is all made in Sagnak’s workshop in Ankara, where he has created pieces for dignitaries including the Turkish prime minister.

Genel and Nyman wanted their store to reflect the jewelry shopping experience in Istanbul. The 700-square-foot shop has walls of hand-painted tiles inspired by those in Turkey and handblown glass lanterns in jewel tones that hang from the ceiling. There is also a jeweler’s bench in the store that faces out the window, so customers and onlookers can see jewelry being soldered and set.

“In Turkey, when you buy jewelry, it’s a two-hour [process],” said Genel, who noted there is formal tea service when buying fine jewelry in Istanbul and Ankara. “If you’re going to buy yourself jewelry, especially now when people are so careful of how they spend their money, it should be a special experience.”

Pieces in the store range from a simple citrine drop earring for $400, up to $300,000 for a 150-carat emerald necklace. Average prices are from $2,000 to $6,000. Stones such as rose-cut diamonds, rubies and tourmalines are set in the sometimes delicate, sometimes edgy pieces.

While the store owners declined to offer sales projections, they said there are plans to open 10 Atelier Minyon boutiques across the U.S. by 2014. Florida, Georgia, California, Colorado and Texas are where the firm is seeking to grow. The firm will also begin wholesaling the jewelry under the Atelier Minyon brand name.