Leading costume jewelry designer and manufacturer has licenses that include Kenneth Cole and Betsey Johnson. 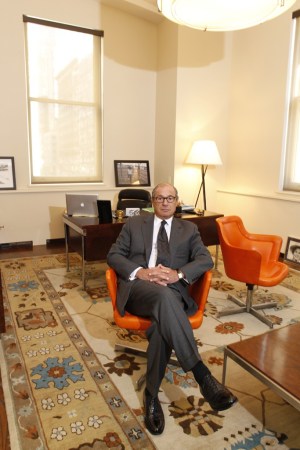 Haskell Jewels is one of the leading costume jewelry designers and manufacturers in the U.S. with licenses that include Kenneth Cole and Betsey Johnson — and the company also owns costume jewelry firm Miriam Haskell and recently acquired Robert Lee Morris. That stable of brands makes Haskell one of the largest vendors to Macy’s, J.C. Penney, Kohl’s and Dillard’s. Below, owner and chief executive officer Frank Fialkoff talks to WWD about the past two decades and how he turned Miriam Haskell from a $200,000 business into a group that now has estimated sales of $150 million.

WWD: Haskell Jewels acquired Miriam Haskell’s assets in 1990 — when you once said the line was “virtually out of business” and doing just $200,000 worth of business a year. Why do you think you were so successful in turning it around?
Frank Fialkoff: When I bought it, all we had was [Miriam] Haskell — an exciting company. What we brought to it was an aggressive sales point of view, new designers and merchandising. The timing was perfect — it was a time when vintage collections were happening, and it did extremely well. [But] Miriam [Haskell] is totally handmade so there is only so much you can do in terms of production. We reached a point where it was time to add another dimension, and this was the trend business. I had done this most of my life. In the early Nineties there was an explosion of the Y-necklaces — and at that point our labor was in-house and we had the infrastructure to do this. It was an enormous success and put us in a total other realm. In 1993, Haskell was $50 to $100 and up and these Y-necklaces [and other trend jewelry] retailed for $15. It gave us a whole other array of merchandise that led us into the popular priced trend business. That was Haskell Jewels, and we were in most department stores by 1994 to 1995. It was from here [the trend business] that we were approached to do private label.

WWD: Your licensees include Kenneth Cole, Betsey Johnson and Simply Vera for Kohl’s, plus you own Miriam Haskell. This is a vast range with different brands at different price points. How do you ensure product for each is on-brand?
F.F.: It’s very important to us to keep our brands very separate and very private. Every brand has a brand manager, its own design staff and sales force. That assures us that each will have its own DNA. It’s our vision to make sure every brand has its own look and point of view.

WWD: What was the turning point for Haskell Jewels that made the company into one of the leading costume jewelry manufacturers in the U.S.?
F.F.: The concept of the company is to have an array of merchandise that can go to all channels of distribution. Our first licensee was J.Lo [in the Nineties] and that really changed us. The launch of J.Lo was a success — it was in 1,200 department store doors in the U.S. Doing a brand in the department store is different than selling fashion goods. It’s a very different business than [the] trend [business] and Haskell. The requirements [for a licensee] were very different than the business we were in.

It gave us the opportunity to manage our business in the department stores and be responsible for inventory, turn and sales. It requires more information and planning and set us on the path of doing other brands. After J.Lo was Betsey Johnson in 2004, followed by Kenneth Cole in 2007.

WWD: Robert Morris is the most recent acquisition. What are your plans for the brand?
F.F.: We are going to relaunch in February for the spring of 2012. Robert Lee Morris was and is one of the most important fashion jewelry designers and we plan to put him back on the map with a national advertising campaign, compelling merchandise — and by letting Robert really do the designing. Being a true artist means all of those design [sensibilities] come naturally. We’re also relaunching the retail business — and if we see the store is profitable and it’s a profitable business to be in, then we will plan to roll out additional stores. It’s also a great licensing opportunity, meaning we would be the licensor — and depending on what products we aren’t producing [ourselves], we will license this out.

WWD: Why has Haskell Jewels been so successful at capturing the audience of the contemporary and costume jewelry category?
F.F.: The success of our business is covering the gamut of fashion jewelry, from moderate to upper scale. We’ve built an enormous base to our company, and it’s key to our company that we can do business at every level and every price range. That’s the way the company has been created — through our private label, brands we own and brands we license.

WWD: Are there plans to enter the fine jewelry category?
F.F.: Not fine. We used to be in the bridge category, but we do work in silver. We have no plans to go into gold and platinum. We do have plans to add some watch licensees [from the success of the Betsey Johnson watch collection] — and we have a couple of things in the works. We’re always interested in acquiring what makes sense for the company.