Alchemist, a pair of lifestyle and designer fashion boutiques in South Beach, headed to the mainland for its third namesake location, which focuses on fine jewelry. 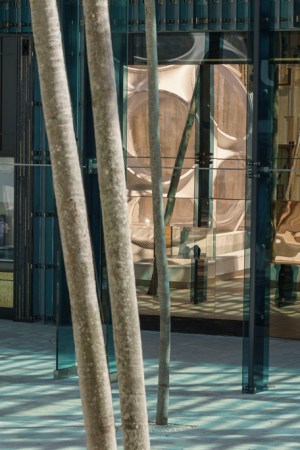 MIAMI — Alchemist, a pair of lifestyle and designer fashion boutiques in South Beach, headed to the mainland for its third namesake location, which focuses on fine jewelry. Once again, owners Roma and Erika Cohen commissioned local architect Rene Gonzalez to design the 1,000-square-foot space in the Miami Design District’s Palm Court.

“It’s like Place Vendôme,” said Roma of the Palm Court, where Alchemist is the only independent among major luxury jewelry and watch brands from Piaget to Vhernier. “The site’s conceptually beautiful architecture by Sou Fujimoto also felt very natural to us.” Inspired by its haute neighbors, the decor use high-end materials like costa esmeralda marble-covered walls and LED-lit, horizontal vitrines in onyx that run the length of the store. A gleaming, rose gold-mirrored facade, including the entrance’s heavy door, can be seen from 39th Street.

“A band of clear glass runs around this reflective surface for shoppers to peek in,” said Gonzalez, who also stretched white latex across the high ceiling for dramatic effect. “It’s about discovery and alchemy.”

“Most of our finer collections are exclusive here, while a couple like Lynn Ban and our private line and collaborations [Smoke by Erin Wasson, A+B with B. Akerlund] are also carried at our beach stores,” said Roma, who launched with Stephen Webster, Irene Neuwirth, Abraxas Rex, Garrard, Wilfredo Rosado, Elise Dray, Luis Morias, Lydia Courteille, Cristina Ortiz, Monique Péan, Spinelli Kilcollin and Bamford Watch Department. “We’ve developed a great business with these special jewelers, and this new space gives them the attention they deserve.”