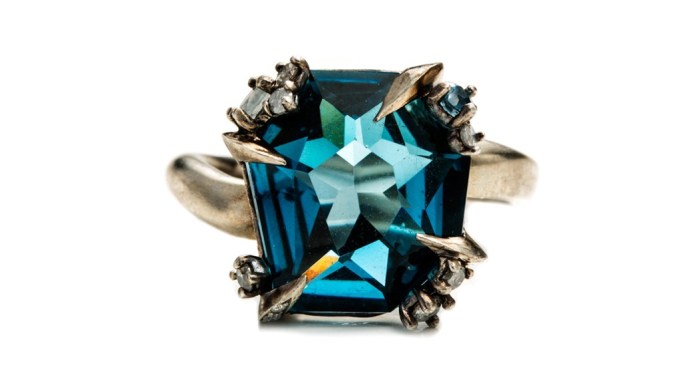 After more than 20 years in costume jewelry, Alexis Bittar is entering the fine jewelry market. Alexis Bittar Fine launches Tuesday in 17 Neiman Marcus stores as well as Bittar’s 11 stores and Web site. “It’s been a five-year conversation,” said Bittar of the collection. “I design three different [costume] collections in a super-prolific way and to extend that into something that is precious seemed like such a natural evolution.”

Bittar is working with precious and semiprecious stones, with 25 percent of the collection set in 18-karat gold and the other 75 percent in sterling silver with 18-karat gold. Prices range from $295 to $16,000.

Known for his fashion-driven sensibility, which is broken up into three very different costume groups — Elements, Lucite and Miss Havisham — Bittar said creating a new aesthetic for the fine jewelry was a challenge. “It had to look unique because it can’t cannibalize what’s existing,” said the designer, who described the look of the fine jewelry as a fusion of “a grunge Nineties punk feeling with kind of this 1950s-ladylike-with-a-little-bit-of-a-thorn feel.” Marquis-shaped stones are a key cut, worked on a tennis bracelet with quartz, London blue topaz and pavé diamonds, and marquis chandelier earrings with iolite, chalcedony and pavé diamond claws, as well as kidney wire earrings in a range of sizes. For spring the palette is pastel-focused with amethyst, iolite, quartz and sapphires.

Bittar said there will be core items that will carry over from season to season, in addition to four fashion-driven collections per year. There are some statement pieces within the fine jewelry, such as cocktail rings and a single strand of chunky marquis stones, but overall, the fine group has a more delicate sensibility than Bittar’s costume range. “I think people mostly thought it was going to be this large-scale jewelry,” said Bittar. “I went a little bit in reverse, where I designed things that were more petite.”

Plans for the fine jewelry collection, which is positioned in the designer jewelry category — between costume and the upper echelons of fine — were announced when San Francisco-based private equity firm TSG Consumer Partners took a 50 percent equity stake in Bittar’s business last year.