Alighieri Expands Its Brand of Storytelling and Romance to New Categories

The London-based jeweler is gearing up for a footwear launch with Net-a-porter next week, while homeware, bespoke clothing and men's jewelry are also in the works.

LONDON — Rosh Mahtani has many compelling stories to tell.

Five years ago, the literature graduate translated her love for Dante Alighieri’s “Divine Comedy” into a jewelry collection filled with “modern heirlooms”: Gold medallions, signet rings or tear-shaped pearl earrings, each corresponding to one of Dante’s 100 poems and packaged with a modern-day manuscript to narrate the story that inspired it.

The brand’s latest collection, for instance — dubbed “No More Tears” — features glass-blown teardrop vessels inspired by the character of Buonconte da Montefeltro in the “Divine Comedy,” a sinner who cries a single tear as he approaches his death and is saved from the devil.

“When I started the brand I was in quite a dark place in my life and as we approach its fifth birthday, I wanted to celebrate a new chapter with this story,” Mahtani said.

Her deeply personal, emotional approach has been resonating with women across the board: Alighieri now has more than 70 wholesale partners, including the likes of Net-a-porter, Matchesfashion.com, Joyce and LuisaViaRoma; a booming e-commerce business that makes up 50 percent of its total sales, and a record growth of 500 percent in the last year alone.

Having built a strong foundation for the brand, Mahtani is ready to expand the universe of Alighieri to a host of new categories, ranging from footwear to homeware, men’s jewelry and bespoke pieces.

Storytelling will remain the common thread across everything she does. “I started with jewelry because for me that was the most universal way to tell a story, and as the brand grew it became really clear that there is so much more that we could be doing. Our customer demographic is so varied but if there is a common denominator — it’s that the Alighieri woman loves to feel part of a story and almost believe in magic a little bit,” said the designer, who has been shortlisted for this year’s BFC/Vogue Fashion Fund, which marked the first time a jewelry label was included in the competition.

There’s definitely a sense of magic in the brand’s first foray into footwear, a range of espadrilles launching exclusively on Net-a-porter on May 15: Mahtani was inspired by images of Salvador Dalí wearing espadrilles in the summertime and during the design process found herself in a minuscule store in Barcelona, which ended up being the same one that had produced the espadrilles worn by the famed artist.

She convinced the craftsmen in the store to hand make her own version of the espadrille, which comes with lace-up ribbons, chains that double as anklets and some of the brand’s signature charms, such as gold coins and pearls dangling from the ribbons. 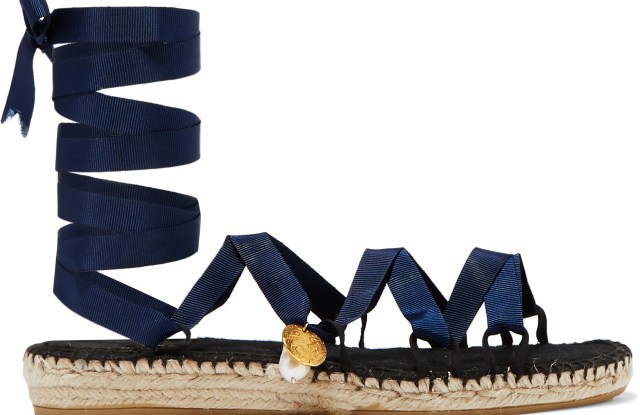 “You’re literally walking with the story and that’s what we all need, to feel like we have that strength in our soles,” the designer said.

Net’s global buying director, Elizabeth von der Goltz, said the e-tailer wanted to partner with Mahtani on the new category launch to build on the momentum it has been experiencing with Alighieri to date. “We have a very robust business with Rosh and see real potential for her designs to be extended in other silhouettes and categories,” she said. “The brand has been able to build a strong, recognizable design structure straightaway with amazing storytelling. Each piece reminds the wearer of qualities such as strength and courage, which feels both modern and timeless.”

The idea behind the footwear launch was to start slow and stay true to the brand’s values of offering products that are both precious and easy-to-wear.

“It felt natural to create a shoe that you can wear in any occasion, whether you’re on a summer holiday or in the city. That’s how I see jewelry, too. While my parents’ generation viewed jewelry as something to be saved because it was so precious, I wanted Alighieri to be something like a talisman that you can wear with a white T-shirt and trainers, but then you can also wear it with a black tie dress to a wedding,” said Mahtani, adding that working with small, family-owned manufacturing facilities and helping preserve craft is another priority.

She has been manufacturing all her collections to-date in Hatton Garden, an area in London known for its jewelry manufacturing, even as the quantities of the orders and incurring costs are increasing.

“Usually when brands get to this number of units they go abroad, but I really want to pioneer the fact that you don’t have to go abroad to scale. It’s more sustainable for the environment to stay here and you pay more for it, but maybe that’s not a bad thing. Maybe we need to slow down, and have more realistic ideas of what our margins should be,” Mahtani explained. “The history of Hatton Garden is so important and we’re losing it. The rents are pushing people out, as there are more and more media agencies in the area and the price per square foot has gone from 35 pounds to 70 pounds in two years, so all of the jewelers are being pushed out, which is just such a shame as there is such a rich history here.”

Mahtani has also been working with a local glass burner to create giant-sized versions of the tear-drop vessels in her latest jewelry range, which can double as objects for the home or jewelry displays — and also pave the way for the brand’s entry into homeware, a category that has been increasingly intertwined with fashion as of late.

“It’s an extension of what we already do and it’s the idea of celebrating your jewelry, as something you wear but also an object that you display and admire,” Mahtani added.

She’s not stopping there: She is already thinking of new footwear styles and new accessories categories like bags and translating some of the brand’s signature pieces such as the signet rings or medallion necklaces in thicker, more masculine shapes for the growing group of male Alighieri fans.

The men’s jewelry collection will launch later this year, alongside a charming portfolio showcasing a group of Alighieri men, who range from restaurateurs, to lighting designers, perfumers and musicians, across all ages and nationalities.

Mahtani has also been having fun creating bespoke clothing items: from a top made entirely out of pearls to a dress that consists of interlinked metal clips, which she had fun wearing under a slip at a party. 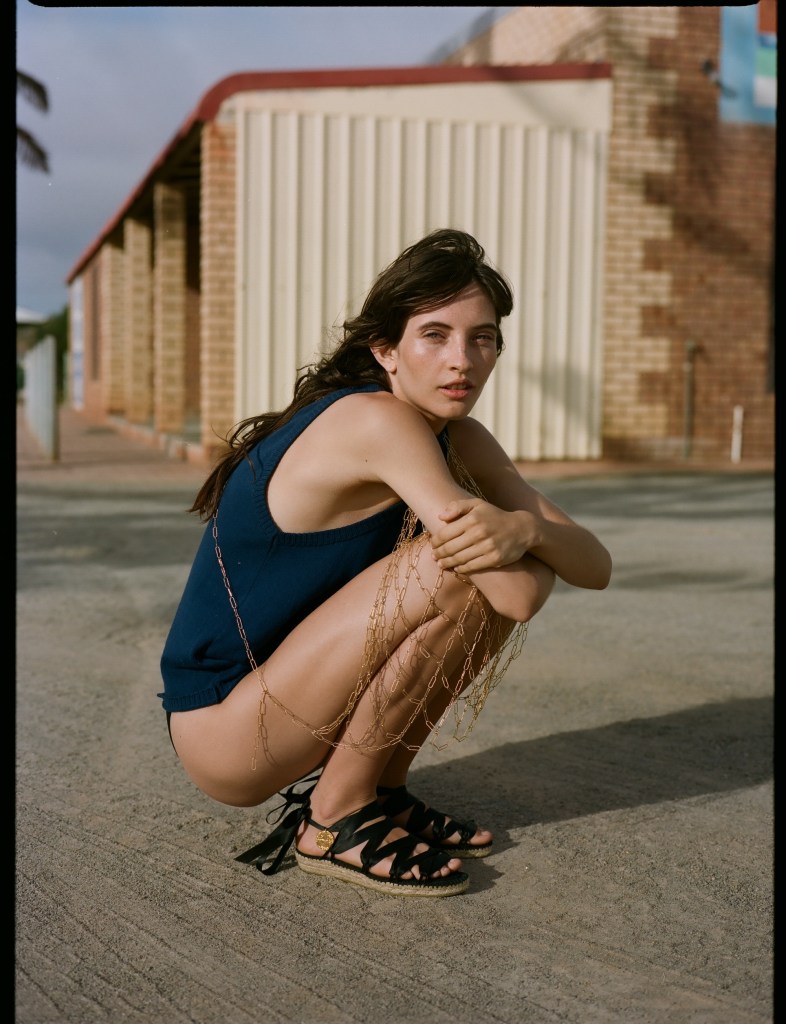 Categories can move between extremely high-price points for couture-level pieces to entry-level ones, as the brand aims to be inclusive and is banking on its captivating narratives to maintain a sense of unity.

“With everything we do, we always want to have a range so you can tap into the story at whatever price point you want,” added Mahtani. “People can grow with us: We have students who save up for a year to buy a lion medallion for themselves for their graduation and then five years later when they’re earning a bit more, they come and buy pearl earrings or a range of pieces for their wedding.”

The brand didn’t create such an engaged community overnight; Mahtani said her first years were loss-making and awareness was low. She built traction slowly and in an old-school manner, by often hand-delivering orders to save delivery costs and making friends with clients along the way; by handling wholesale partnerships personally, again to spare the cost of hiring a sales agent, and creating more intimate relationships with buyers, and simply by relying on word of mouth.

“I don’t think those connections can happen as organically when you put in place an infrastructure right from the start. I really attribute [our success] to the personal element in every way possible. The reason I’m doing this brand is to build human connection because I really believe that through these objects people can build a community,” the designer said.