Harlot & Bones is a 13-piece collection that draws its inspirations from nature, history — and the shadowy side of humankind.

By Samantha Conti and Lorelei Marfil on February 24, 2014
View Slideshow 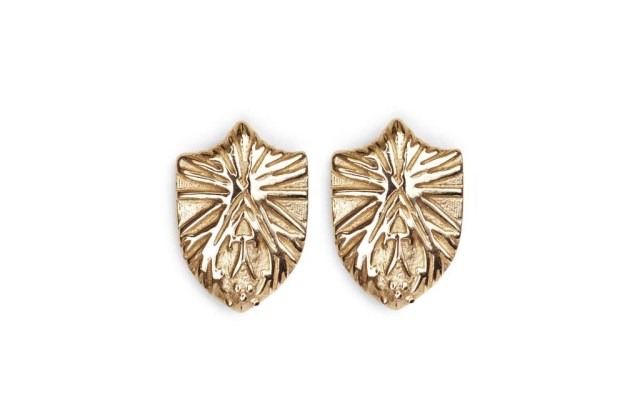 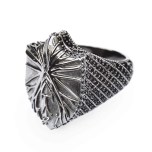 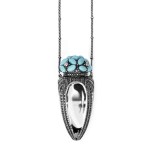 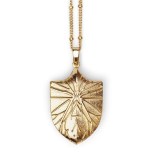 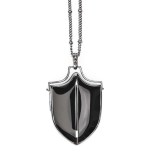 LONDON — Lady Amanda Harlech and Dominic Jones are set to unveil a jewelry collection that draws its inspirations from nature, history — and the shadowy side of humankind.

Harlot & Bones is a 13-piece collection that includes poison signet rings, lockets and earrings shaped like shields and adorned with beetle wing designs and a perfume bottle necklace dotted with bits of turquoise.

The collection, whose name is a play on both designers’ surnames, will make its debut on Saturday with an installation and exclusive customer event at Colette in Paris. The collection will be carried at Colette, Liberty, Net-a-porter.com, Corso Como and Showstudio.

“I’m very much about a jewelry piece that tells a story. When Dominic and I got together, we just thought, ‘Well, what do we like? What makes us go, wow?’” Harlech told WWD. “It was at that point we both connected so much with the idea of the planet and the beauty of nature.”

The two know each other through Harlech’s son Jasset, who was at university with Jones. They have been working together for about two years on the collection.

Jones, a London-based jewelry designer and London Fashion Week regular, said he and Harlech wanted the pieces to have a sense of history and modernity.

“They kind of feel like modern heirlooms and things that you’d pass on, but the shapes and the curves are still very modern,” said Jones in a separate interview.

Jones said his personal favorite is the perfume bottle necklace: “It’s the most detailed, and it’s the piece that took the most work and it’s definitely the most epic.”

He also plans to wear one of the poison rings — but with no insidious intentions. “He put in a four-leaf clover his father gave him,” said Harlech. “You can put in something precious. The things in life that are so precious are worth celebrating and I think jewelry does that.”

Harlech said she’s looking forward to more collections, and a second one is already in the pipeline.

“This was a very first, tentative little collaboration, which I thoroughly enjoyed and want to do more. In a way, it is a very innocent collection. You’ve got earrings, you’ve got your amulet-style necklace, you’ve got your ring and your locket. It could be so much more,” she said.

Each piece of jewelry comes in a box with a seal, and is accompanied by the lyrics of a song written by Harlech printed onto delicate Bible-style paper.

Harlech said those who read all the song lyrics can hear “the voice of one woman. You can vaguely find the story that he gave her a ring, and then left. It’s about what endures,” she said, adding that she would eventually like to have the songs set to music.

For the launch of the collection, Nick Knight has photographed Harlech’s actress daughter Tallulah as a wild-haired sprite in a muslin dress with dried flowers pressed onto her skin. “It’s very poetic,” said Harlech.