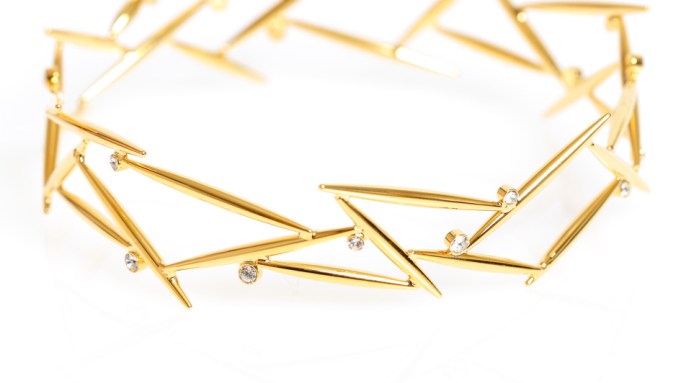 Japanese jewelry master craftsman Masaaki Takahashi, who makes his namesake jewelry with an ancient technique called Yose-Mono, is looking to expand his business to the U.S. The jewelry process in which he specializes has all but disappeared — Takahashi claims to be one of four craftsmen left in Japan who actively pursue the technique.

Yose-Mono calls for clay made from ground seashells as a mold, as opposed to the commonly used wax-carved molds. Because the process involves soldering components together at high temperatures, the wax would melt instantly — thus the need for clay. The pieces are melded together to form the crystal setting as the delicate nature of the jewelry joints would not allow for pouring molten liquid through the small space. Usually this process is reserved for fine jewelry as the labor-intensive, machine-free procedure isn’t conducive to mass production. The designer said each pair of earrings for instance, takes two to four days to make and he can set up about 20 pairs of earrings a day.

Takahashi set out to be an architect and in fact, worked for several years as one in Finland. He returned to Japan to follow in the footsteps of his father who was also a Yose-Mono craftsman. He aligns the two disciplines when creating jewelry, comparing both as requiring the designer “to tell a story and imagine who it is to wear your designs.” After working for other brands, he launched his namesake collection three years ago. He employs a team of six people, only three of whom are able to do the process; his father, another architect he trained and himself.

The collection is big on the use of colorful Swarovski crystals though his latest is a bit of a departure. Based upon his excitement on coming to New York for the first time, his latest collection called “Neuron” is a graphic criss-cross pattern of gold-vermeil plated thin elliptical shapes dotted with singular crystals throughout on a necklace, earrings and bracelet. As the name suggests, the pattern is meant to be a physical description of brainwaves in a state of heightened stimulation. His feather collection, which features black and white Marquise-cut crystals, is more representative of his work. Lady Gaga is reportedly a fan and has a specially designed pair from Mr. Takahashi that reads “mother monster” in Japanese.

The designer is also garnering attention for the tiaras which can retail as high as $4000 based on the work involved in such an intricate piece made from the ancient process. This may prove to be a successful niche the designer could fill as party dressing and wedding accoutrement has influenced a new demand for the jeweled headpieces with designers from Miu Miu to Los Angeles-based Amber Sakai offering them. Currently Mr. Takahashi is sold at Isetan in Tokyo, though he is opening up sales here in the US. .for 2017 with wholesale prices ranging from $75 for earrings to $2000 for the elaborate headpiece.