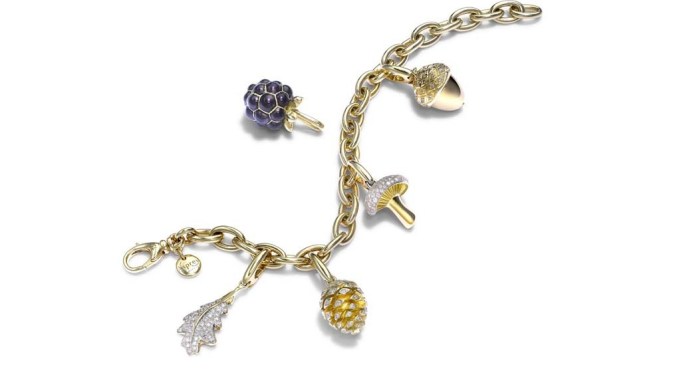 LONDON — Asprey is sharpening its image with help from some East End London talent, a dose of British whimsy and manufacturing know-how.

Paddy Byng, Asprey’s managing director, has been focusing on creating a solid and sustainable business for the brand, which has been through a dramatic series of ups and downs over the past decade. “This is an heirloom business — not a fashion one — and, yes, I feel like we’ve got some momentum going,” said Byng, adding that retail turnover in the year to March 2012 is up 15 percent, with sales at Asprey’s New Bond Street flagship up 13 percent. Sales at Asprey’s stores in the U.S. rose 34 percent.

Byng said growth was fueled mainly by jewelry sales, which rose 42 percent in the year and silver, where sales were up 20 percent.

The momentum behind the brand has come from a number of drivers: Since taking over in February 2011, Byng has brought in East London-based designers Shaun Leane and Katie Hillier to create new jewelry and accessories collections for the brand, unveiled an e-commerce site and launched new jewelry, gift and leather goods collections aimed at a wide variety of customers.

He’s also put plans in motion to renovate the London and New York units by the fall. No major face-lifts are in the works; instead he’s going for a change in mood.

“It’s terribly important to have a modern British identity for Asprey, and these are two of the strongest talents in jewelry and accessories,” said Byng of Leane and Hillier. “Jewelry and leather are important categories for us,” he added.

Jewelry makes up about half of Asprey’s sales, with leather goods generating 25 to 30 percent, and silver, china and other categories accounting for the rest.

Among the new launches are the Fern and Woodland high-end jewelry collections, both of which are designed by Leane, who is based in Hatton Garden, London’s diamond district, and who regularly created dramatic runway jewelry and accessories for Alexander McQueen. Fern is a collection of delicate designs made from emeralds, white diamonds, platinum and black rhodium. It has an Art Nouveau feel. Prices range from about 30,000 pounds, or $48,600, for a ring to 225,000 pounds, or $364,500, for a necklace and many of the pieces are made in the workshops above Asprey’s flagship.

All figures have been converted from the pound at current exchange rates.

Woodland is a jewelry collection featuring nature-inspired charms such as the acorn, mushroom, oak leaf and pinecone. It’s made from 18-carat gold and set with brilliant cut and pavé diamonds and purple enamel. Prices range from 2,000 pounds, or $3,240, for a single charm to about 18,000 pounds, or $29,160, for a bracelet with all of the charms. Byng said that the Woodland collection has launched on a high note, with a 70 percent sell-through.

Hillier, who designs a fine jewelry collection under her own name and who has collaborated on leather accessories for Marc by Marc Jacobs, Salvatore Ferragamo, Stella McCartney and Victoria Beckham, is working on Asprey’s handbags. She’s put a fresh spin on some of the existing models, such as the boxy Post Bag, and created a new design, the satchellike Wiltshire Shoulder Bag.

London milliner Philip Treacy is working on a limited edition version of the brand’s traditional Christmas cracker, and will also be making limited edition pieces for Asprey’s product categories including the bar and the home.

The brand has also built up its small leather goods business — a zip coin purse costs 145 pounds, or $235 — and collaborated with the British luggage brand Globe-Trotter on the Londoner Luggage Collection. The hard cases have purple alligator-reinforced corners and handles and Asprey locks.

Byng has also been hard at work on Asprey’s third core category, silver. While the company may offer a surfeit of picture frames and luxury baby gifts, Byng said that what’s proving particularly popular are the unique pieces that embody British whimsy, such as animal head decanters and even a silver gorilla with a safe in its belly, the latter of which costs 100,000 pounds, or $162,000.

With regard to the store renovations, Byng said he plans to make the vast ground floor atrium space of the London unit warmer and more intimate, with new floors and lighting. He’ll also move a wider variety of merchandise — including clocks and silver merchandise — into the space. Right now, it’s filled with large cases of diamond jewelry. New York will get a similar treatment, and the projects will be completed by September.

Byng is the first all-around manager that Asprey has had since Sciens Capital Management purchased the brand with Plainfield Asset Management in 2006 from Lawrence Stroll, Silas Chou, and Edgar Bronfman Jr. John Rigas, the chairman and chief executive of Sciens, had been running Asprey since Robert Procop stepped down as head of Asprey London in 2010. Asprey has a total of seven stores in the U.K., the U.S., Japan and Switzerland.

According to the latest accounts filed at Companies House, the official register of U.K. businesses, in the year ended March 31, 2011, Asprey London Limited, the trading company for Asprey’s business in the U.K. and the European Union only, posted turnover of 11.8 million pounds, or $18.5 million, down from 12.7 million, or $19.9 million in the previous year.