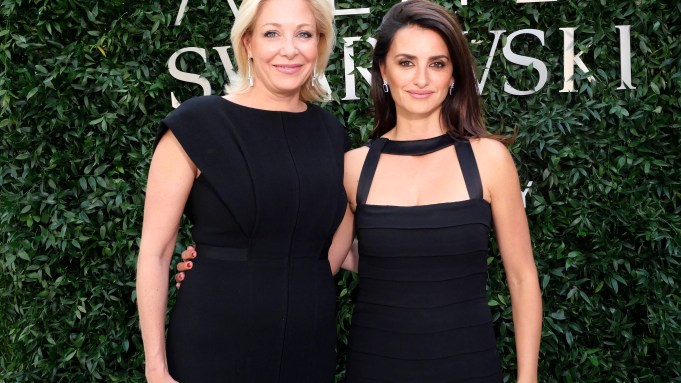 PARIS — Everyday life is jeans and T-shirts for Penélope Cruz. “And shoes that I can use to run — because I am a mother,” she said.

“I don’t wear a lot, just small things that can be special for me, that have a meaning.”

Of course, the red carpet is a different story altogether.

“When there is a premiere, you feel like there is a reason, you know, because you’re wearing a couture gown and it asks for more,” was how she described it.

The Spanish actress was in Paris to show her Atelier Swarovski collection of fine jewelry and spoke to WWD in a lounge of Apicius, a Michelin-starred restaurant decorated with leopard print chairs and gilded chandeliers.

“It’s a dream to be able to wear your own collection,” explained Cruz, who on Wednesday morning also attended the Chanel show, as the latest ambassador to be named by the fashion house.

Cruz took pieces from the jewelry collection to the Cannes Film Festival this year, wearing earrings made from fair trade gold and Swarovski-created diamonds and rubies, showing the first pieces from the partnership on the red carpet. By Cruz’s account, the jewelry carries her imprint.

“They have given me a space to have a voice and an opinion — it’s really a collaboration, that’s not a fake collaboration where you just give your name and you haven’t done anything,” she said.

“We’ve done it together and I’m very grateful for that,” added the actress, who recalled growing up without much jewelry.

One piece she remembers was a gold and garnet ring that had belonged to her grandmother, Modesta.

“It always had my attention. Sometimes when I was at her house I would ask her to let me wear it for a day and then, when she was older, she gave it to me and my sister to share,” she said.

While she wore red stones at Cannes, her new pieces from the collection carried white and blue accents, with lab-created diamonds and sapphires set alongside white topaz jewels sourced from Rondonia, Brazil; and Sri Lanka. A large, emerald-cut Swarovski-created sapphire served as the centerpiece for the Angel choker. Pieces from the Luna set included half-moon-shaped earrings made from the clear pear- and marquise-cut stones.

Nadja Swarovski, executive board member of Swarovski, said the label’s push into lab-made stones was prompted by the realization that celebrities preferred diamonds to crystal jewelry.

“We started this initiative because we’ve been dressing celebrities on the red carpet with crystal jewelry and crystal handbags and we actually realized they prefer diamond jewelry versus crystal jewelry,” said the executive. “And we thought that’s too obvious and too easy for us to go into; let’s just be innovative, embrace the created diamonds. That’s the right audience to talk about the reason why created diamonds exist — one of the positives about created diamonds is they’re totally sustainable.”

“To make it top of mind in an organization. I think lack of awareness has been the biggest hurdle,” she said, noting the company launched its corporate social responsibility program five years ago.

“The younger generation cares much more, and they know so much more about the issues that are there — I think the previous generation is still in a little bit of denial,” she added.

Flooding in her home country is one of the tangible signs of environmental problems, she noted. “I come from Austria. The glaciers are indeed melting. And the melt water gets higher and higher every year, and it’s causing floods,” she said.

“They are so informed about those topics, they have a voice and they dare to speak up,” she said.

Mindful of her role in the spotlight, Cruz said she uses the attention to steer conversations.

“For me it’s very important, every time I do an interview this issue is going to come up, so it gives us the opportunity, if you become a public person,” said Cruz, who said she’s more interested in talking about environmental subjects than “selfies or the crazy world of social media.”

“We’re also proving — trying to prove — that luxury and sustainability can go hand in hand. Yes, you can have a luxury product and yes, it can be produced sustainably,” posited Swarovski.

“They’re innovators; probably they’re leading maybe 20 years ahead of how things are done they’re able to do it now. So they’re setting an example,” said Cruz of Swarovski’s embrace of lab-created jewels.

She had an idea of how to wear the Angel choker.

“Sometimes I also like the idea of jeans with a big piece, the combination of that is really rock ’n’ roll and it can be really cool,” suggested the actress, brown eyes flashing.