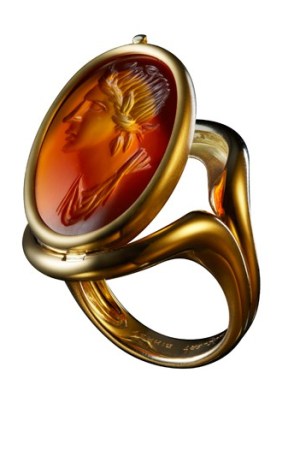 PARIS — The likes of 16th-century Japanese menuki gold ornaments that samurai warriors would attach to their sword handles and Sumerian beads literally “as old as the pyramids” are among elements of a stunning collection of one-off contemporary jewelry pieces by Marc Auclert, who has opened a small boutique, Maison Auclert, on Rue de Castiglione here.

Auclert, a jewelry industry veteran who has worked for a number of prestigious brands, describes the concept as “a collector’s approach,” working with local jewelers to develop modern mounts designed to showcase precious antique “bits and pieces” picked up from dealers, private collections, auctions and flea markets over the past 20 years.

Mounted on a bold black silver cuff with a flat top is a honeycomb formation of small gold Sumerian beads, held in place by black nails. Meanwhile, an extremely rare and long amethyst bead from the Akkadian kingdom, circa 2200 B.C., has been transformed into an 18-karat gold set pendant, a 1.04-carat orange sapphire dangling from its tip.

“The length and narrowness of the bead, whilst still being drilled, just proves that this was part of an extraordinary jewelry box, because to do a drill hole in a stone like that was just impossible; it probably took months and months of drilling slowly, adding water so that there wouldn’t be too much heat, being patient so that the stone wouldn’t have too much tension,” explained Auclert. “This is most certainly royal provenance. For bead lovers, this is amazing.”

Other highlights include an antique cornerless cube rock crystal, likely produced in India, mounted on a white gold and diamond ring. “That shape was extremely popular. They’d make a cube, cut the angles and have this prismatic shape which women and men in antiquity just loved,” said the designer. “You have to understand that, at the time, representations were much easier, so a pure triangle, for instance, was something of great beauty. Now they’ve got computers or whatever, but at the time everything that was extremely simple and geometric was extremely fascinating.”

Slipping a group of stack rings onto his pinkie topped with beads taken from a Roman-era necklace, studded with diamond dots, Auclert said he finds the aura of each piece overpowering. “These beads, which are probably 2,000 years old — how many women, strings of women, have worn these strings of beads?” he marveled.