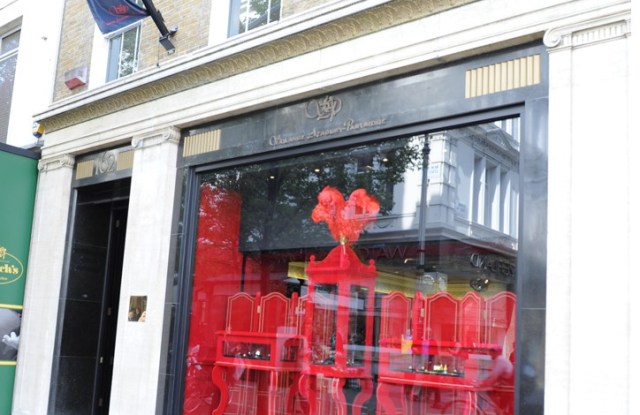 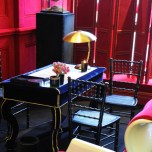 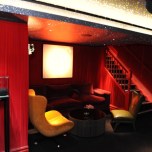 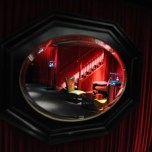 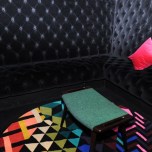 British jeweler Solange Azagury-Partridge has decamped from her longtime home in luxe-bohemian northwest London to the international jewelry hub of Mayfair.

The designer has opened a grand, 1,600-square-foot shop across from the new Louis Vuitton maison and not far from fellow jewelers Cartier, Tiffany, Van Cleef & Arpels, Leviev, Moussaieff, and Boucheron — where she once served as creative director.

The store, formerly occupied by Lalique, spans two floors and carries all of Azagury-Partridge’s jewels, including The Random gold-and-multicolored-stone necklace that Sarah Jessica Parker wears in the ads for “Sex and the City 2”.

The jewelry is mainly displayed on the ground floor, while the lower floor is for VIP customers, press and special events.

“You cannot imagine the horror of the place when we got here. Now I think there’s a nice feng shui — it just flows,” she said of the ruby-red ground floor, with its velvet paneled walls, picture windows overlooking Bond Street and star-covered carpet that she designed.

The white ceiling features a swirling confection of molding — a replica from a grand Mayfair town house — that serves as a fitting foil to the color-drenched interior. “Ceilings are such neglected areas, and I love a molded ceiling — it’s a bit of a treat,” she said.

The decor is a mix of salvaged and restored midcentury modern pieces and ones designed by Azagury-Partridge, such as a rectangular cocktail table with silver chainlike fringes dangling from the edges; a star-shaped glass display cabinet, and the Moroccan-made carpets — one with a rainbow design, another with stars and another still with snakes.

“I wanted to lighten things up a bit but retain the cozy, intimate feel,” said the designer, referring to her Notting Hill shop, which was smaller and felt more like a boudoir.

A red staircase, its railing covered in matching velvet fabric, leads to the basement level, where the walls are paved with tiny Swarovski crystals and the ceiling sparkles with constellations picked out in the faux gemstones.

There are private alcoves for relaxing and viewing, one of which is lined with Chesterfield-leather benches and another with a centerpiece of a goddess that resembles the Buddha.

Azagury-Partridge, whose clientele includes Victoria Beckham, Rachel Weisz, Yasmin and Simon Le Bon and Thandie Newton, said friends, family and old neighbors have been dropping by the new store, but there are many newcomers as well.

“We’ve never really had passing trade before, and more than half of the people who walk in here are new clients,” she said.

Azagury-Partridge, whose company is backed by the Vienna-based Labelux Group, added that she will shortly be moving her offices from Notting Hill to a nearby venue on Bond Street.

Next up on the retail front is a boutique at 340 North Rodeo Drive, not far from the one owned by her former boss at Gucci Group, Tom Ford.

The 1,200-square-foot store will be similar in mood and decor to the one in London — but with specially designed rugs — and the opening is set for the fall.