The collection is seen rejuvenating the jewelry category at the French crystal firm. 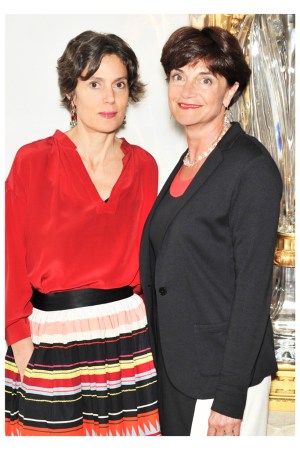 PARIS — Given her penchant for colorful, chandelier earrings — and for shirking settings — it was hardly a stretch for jewelry designer Marie-Hélène de Taillac to create a capsule collection for French crystal firm Baccarat.

To be unveiled Tuesday in the midst of couture week in Paris, the collection is to make its debut at Colette in Paris this September before rolling out further in France, followed soon after by Japan and the U.S.

“This is the first step of the rejuvenation of the bijou category,” said chief executive officer Daniela Riccardi, who joined Baccarat in 2013 and made fashion accessories a key rung in her strategy.

While jewelry represents only about 10 percent of Baccarat’s revenues, Riccardi considers it a crucial entry point for the brand that sells exceptional vases for $30,000 and made-to-measure light fixtures that can run into six figures. Prices for the Marie-Hélène de Taillac for Baccarat collection start at 250 euros, or $275, for a small pendant, up to 3,500 euros, or $3,900, for a multicolored or clear crystal necklace. A limited-edition set in red crystal goes for 6,500 euros, or $7,235 at current exchange rates.

Riccardi lauded de Taillac’s designs as “young and easy to wear, yet glamorous at the same time.”

Marking 20 years of creation this year, de Taillac is known for her delicate and colorful one-off creations with a bohemian flare, realized in Jaipur, India. “I always loved crystal. As a child, I remember being attracted to rock crystal — my interest in stones goes way back — and I asked my mother, ‘What is the difference between rock crystal and Baccarat crystal?’” de Taillac related.

Now she knows the answer. “It captures the light in a different way than a stone does, but it’s still very strong,” she enthused.

What’s more, crystal, since it’s man-made, comes in an almost unlimited number of shades, including Baccarat’s signature red, made deeper with the addition of real gold.

“And I’m all about colors,” de Taillac said, noting that spinels and rubies are the main red stones, the latter extremely rare and expensive.

De Taillac noted that chandeliers are a common source of inspiration for her, and her preference for drilling stones, rather than setting them, echoes the methods of chandelier construction. She visited Baccarat’s factory in Baccarat, France, to understand the production techniques, ultimately revisiting its octagon cut — flattening one side for necklaces so the crystals won’t turn — and devising molds for her rings, with the curved steel and gold piercing the crystal.

Draping a clear crystal necklace on Riccardi, de Taillac noted how the jewelry brightened the complexion. “Jewelry has to have a cosmetic effect, and you get this when you wear crystal,” she said.

Riccardi said de Taillac’s collection has a timeless appeal that is a hallmark of Baccarat jewelry, exemplified by its best-selling pendant, the Psydelic, with its teardrop-shaped crystal on a satin cord. “I want things to look like they’ve been around forever. My favorite ring is one I designed in 1997,” de Taillac said. “I consider jewelry to be heirlooms because you want to pass them down. I try to think of all generations.”

Baccarat, which celebrated its 250th birthday last year, has produced jewelry since the Thirties and carries it in all of its 50 directly operated boutiques and corners. There are 900 Baccarat sales points in the world.

Since joining Baccarat from Diesel, Riccardi has narrowed the product range to about 1,000 references, down from a peak of more than 7,000, allowing the company to optimize production and distribution cycles.

Both Riccardi and de Taillac expect the rings to be among the most popular items in the range for a simple reason. “If you buy a pendant or a necklace, it’s to delight others,” de Taillac explained. “When you buy a ring, you have the pleasure of seeing it on your hands.”

De Taillac has boutiques in Paris, New York and Tokyo, and wholesales her creations to about 30 specialty stores.