Her new book, “Fashion Jewelry: The Collection of Barbara Berger,” will be the subject of a show at New York’s Museum of Arts and Design. 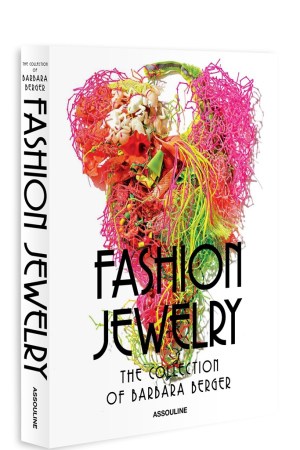 Barbara Berger doesn’t like the term “costume jewelry,” and that’s why her new book from Assouline is called “Fashion Jewelry: The Collection of Barbara Berger.” It has text by jewelry historian Harrice Simons Miller; a preface by Pamela Golbin, chief curator of Paris’ Musée de la Mode et du Textile; an essay by Iris Apfel, and photographs by Pablo Esteva.

Berger, who likes to say that she has been amassing these accessories for 57 years, lives in Mexico with her husband, Mauricio Berger, a fine jeweler and designer. Mauricio is her second husband; her first, like her father, was a diamond dealer, as is her son.

Barbara is at pains to point out that her extraordinary trove didn’t start as a collection; she just began buying the jewelry in the late Fifties, when it was possible to pick up great things for very little money. It all began with a visit to a Paris flea market with her best friend when she was 13 years old; she bought a pair of Chanel earrings. Over time, she amassed 4,000 pieces, one of the most important collections in the world. It will be the subject of a show at New York’s Museum of Arts and Design, also called “Fashion Jewelry: The Collection of Barbara Berger,” which is underwritten by Miriam Haskell with additional support from KLM Royal Dutch Airlines and will open on Tuesday. The show was organized by David McFadden, William and Mildred Lasdon chief curator at MAD, with Miller as guest curator.

The book and the exhibition display the remarkable creativity of the designers and makers of bijoux, with pieces ranging from Marcel Boucher’s three-dimensional, enamel and rhinestone brooch in the shape of a praying mantis from 1941 to Nettie Rosenstein’s silver-plated, enamel rooster dress clip from the Thirties or Forties and Pierre Cardin’s architectural metal breastplate from the late Sixties or early Seventies to a rhinestone, pearl and feather collar necklace by Maison Gripoix, created in 2000.

“We’re doing enlarged photo blowups of five of the necklaces in the installation, including ones from Kenneth Jay Lane and Haskell,” says Dorothy Globus, curator of exhibition presentations at MAD. Much of the jewelry, she notes, is divided up into themes, with one section on Asian inspirations, one on gold pieces, one on rhinestones, one on black and white, one on florals, one on crosses and a retro section that’s “very germane because of ‘The Great Gatsby.’”

“When I started, it was a passion,” Berger says. “I have other collections — art ceramics; handbags, 1890 to today, and Venetian glass.” Her husband, she says, calls her “an accumulator,” not a hoarder. “I’m sort of the kitsch person,” she says, describing Mauricio’s designs as “very classic.” He also represents Bulgari, Van Cleef & Arpels and Chopard in Mexico. Berger has had a number of previous exhibitions of her jewelry, including at the 1987 New York Antiques Show; at the Musée des Arts Décoratifs in Paris in 2004, and at the MODO museum in Mexico City in 2011.

Berger, who was born in New York, attended The Calhoun School and NYU, then went to live in Belgium and finished her education at The Antwerp Academy. “I was doing my collecting there,” she says. “It was a great time for it.”

“I’ve always loved vintage,” she says. “And even when I was little, I knew how to throw things on. Fashion jewelry can lift up your mood or make you calmer. It’s almost like a warrior going into battle. It makes you feel great about yourself. I find the days you don’t put anything on, you sort of want to hide.”

She adds, “For me, the whole fun was the chase and the find, and when I really did my collection, I did not have money.” The notion of buying things now, when important pieces of costume jewelry can cost tens of thousands of dollars, is considerably less appealing, she says. She has, however, made a conscious effort to supplement the vintage pieces in her collection with those from contemporary designers, among them Daniel Von Weinberger, whose wild assemblages of colorful plastic toys, beads, ribbons and shards of glass are epitomized by the Imprisoned in Fluo necklace that appears on the cover of the book; Iradj Moini, whose dramatic one-of-a-kind creations combine a brass-and-copper base with gems, Austrian crystals and rhinestones, and Heaven Tanudiredja, whose colorful necklaces and cuffs feature such details as small hands, wheels and chairs.

Miller, who has been a consultant for Christie’s since 1995, has written a number of books about fashion jewelry, beginning with “The Official Identification and Price Guide to Costume Jewelry” in 1990. She worked with Kenneth Jay Lane on his autobiography, “Kenneth Jay Lane: Faking It,” published in 1996 — she admits to having been a bit starstruck because Lane is “the king of costume jewelry” and has always had a notably glossy lifestyle. Miller also appraised Elizabeth Taylor’s costume jewelry for the Christie’s sale of her possessions in 2011.

Miller is full of interesting lore about these accessories. She notes, for instance, that the elaborate creations of Joseff-Hollywood, which at one point produced 90 percent of the jewelry used in American movies, among them “Gone With the Wind,” featured a special matte plating created so that it didn’t reflect film lights.

One of the best features of “Fashion Jewelry,” in fact, is the short histories of many now-closed costume jewelry houses, among them Sandor, Schreiner, Staret and HAR. About her research, she says, “You have to keep digging, digging, digging until you find the treasure.”