On Thursday and Friday, the Brazilian-born jewelry designer will be showcasing “Stream,” his new fine jewelry offering, via a trunk show at Barneys New York. 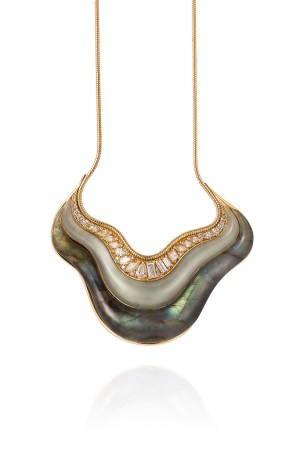 Fernando Jorge is bringing his latest collection to New York. On Thursday and Friday, the Brazilian-born jewelry designer will be showcasing “Stream,” his new fine jewelry offering, via a trunk show at Barneys New York.

Jorge previously teased the collection, showing select pieces during Paris Fashion Week and this past weekend’s Couture jewelry show in Las Vegas, however the trunk show will mark the first complete showcase of all the pieces. “Stream is a return to a softness, and the first pieces that I made, but with stronger shapes,” the designer said. “My inspiration was liquid finding its way over a surface.” The collection revolves around three technical variations of the theme: gold with texture created by line, carved stones, and the mixing of traditional stone cuts, such as round, marquise, pear, baguette, emerald and princess. Materials include 18-karat rose and yellow gold, milky aquamarine, labradorite, jade, diamonds, pink opal and orange chalcedony, with prices ranging from $2,000 to $20,000. “They are muted colors to which I think the Barneys customer will respond well to,” Jorge said. “I’ve also made a few pieces in Brazilian emerald to add intense colors, which will find another type of client.”

The personal appearance marks Jorge’s first New York trunk show; previously he hosted one in Los Angeles, also through Barneys. “It’s a great exchange with the client,” he said. “It lets me know who they are, and they get a more direct connection with the face behind the brand.” Retailers of Jorge’s jewelry include Matchesfashion.com, Latest Revival, Montaigne Market and Net-a-porter, but it is Barneys’ New York location that does the best for the brand in terms of sales, according to Jorge, though he declined to provide any specific figures. “Barneys has a business for independent jewelers that has been going very strong for many years,” he said. “The Barneys client knows interesting jewelry when they see it, and that’s what I’m offering.”

This year also marks the five-year anniversary of the brand, which Jorge launched in London in 2010 after receiving an M.A. in jewelry design from Central Saint Martins. The designer now splits his time between London and São Paulo, with all pieces made in Brazil. Last year, the brand was named amongst the three finalists at the British Fashion Awards for Emerging Accessories Designer — the prize ultimately went to eyewear brand Prism. “I have an independent business, and the growth came really natural,” Jorge said of his relatively rapid success. The designer has no plans of slowing, noting he is working on a high jewelry offering. Retail, particularly in the U.S. market, also makes up a large aspect of future plans for the brand. “I’m focusing on establishing a discussion with the U.S. client,” he said. “I am going to focus on my existing stores that do well, and not try to spread myself to too many stores. In five years, with the speed things are going, I may be able to have my own store. That would be great.”