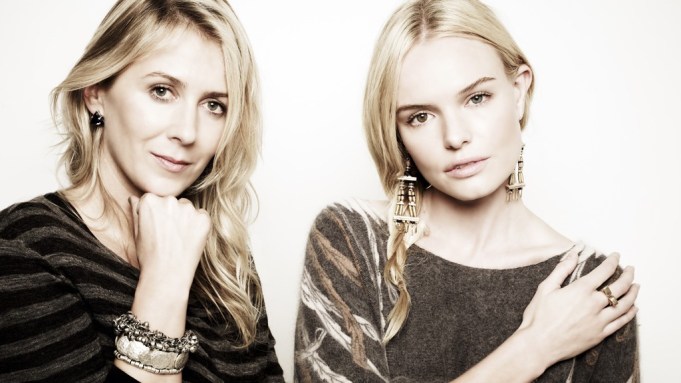 The homepage of BeachMint.com doesn’t look like much. It’s bare bones at best with a logo of plain, lowercase letters done in two shades of green — seafoam (beach) and mint (mint) — and three links, one to job listings, one to contacts and one to JewelMint. This is introduced with a bland declarative: “Our first product JewelMint is live. Check out our exclusive Jewelry collection designed by Kate Bosworth.” One almost expects to click and be redirected to a NSFW (not safe for work) destination. But BeachMint and its founders, Josh Berman and Diego Berdakin, are indeed legit, if behind on updating their own corporate Web site, which bears no mention of the recent additions to its portfolio.

JewelMint.com launched in October 2010 as an e-commerce site for costume jewelry designed by the pretty, fashionable actress Bosworth and her celebrity stylist, Cher Coulter. Everything on the site, from rings to bracelets to earrings to necklaces, is $29.99, with a new collection offered to members monthly. On July 1, StyleMint.com went live with a collection of T-shirts designed by the actresses-turned-fashion moguls Mary-Kate and Ashley Olsen. As with JewelMint, a new selection of T-shirts, also priced at $29.99, is offered monthly. On Oct. 1, BeachMint will launch its third vertical arm, BeautyMint, with a suite of antiaging skin care backed by celebrity aesthetician Nerida Joy and celebrity-shilling powerhouse Jessica Simpson. “We’re obviously the guinea pigs in terms of the first profile, and now the Olsens have signed on,” said Bosworth. “But I feel like we’re just starting to get a really good hold on this experience.”

In little more than a year, the company has gone through three rounds of venture capital funding, beginning with a $5 million investment from New Enterprise Associates in June 2010. Six months later BeachMint landed $10 million in a round led by Trinity Ventures. All existing investors came back this June for the latest round, for a total of $23.5 million led by Scale Venture Partners and Chicago’s LightBank Ventures, at the head of which is Eric Lefkofsky, the chairman and single largest shareholder in Groupon. That makes a total of $38.5 million in venture capital raised in less than a year. TechCrunch has pegged the company’s total valuation at $150 million.

Neither Berman nor Berdakin has a background in fashion or beauty. Both are “Internet guys” from Southern California who can name check, at least tangentially, just about every major social media entity of the last decade. Berman was a co-founder and chief operating officer of MySpace. When News Corp. bought the site in 2005, Berman went with it into the corporate fold and was eventually installed as the head of News Corp.’s incubator, Slingshot Labs. Along the way, he was introduced to Berdakin through a mutual friend, Joe Green, who was Mark Zuckerberg’s roommate at Harvard and is now partners with Sean Parker in Causes. Berman brought Berdakin into Slingshot, where they became fixated on e-commerce as the online promised land. Rather than explore it for Rupert Murdoch, the two left News Corp. for their own entrepreneurial venture in 2010.

“The first thing we looked at was shopping in general,” says Berman. “About 95 percent of all shopping is still done in the traditional retail stores, Wal-Mart, Target, Sephora, Macy’s, etc. Only about five percent is online.” Even if he’s low-balling, those numbers are changing dramatically. “Fifteen years ago people were nervous to put their credit cards online and they got over that hurdle,” says Berman, mentioning specifically the game-changing effect of Groupon and Gilt in the last three years. “Then most online shopping came through sites like Google and Amazon, where you would type in ‘earrings’ or ‘jeans’ and get thousands of results. What we see is an opportunity where it’s shifted and people want more authentic, personalized recommendations.”

Each BeachMint property employs roughly the same model: A celebrity “influencer,” to borrow from the marketing lexicon, is paired with a category that makes sense. Bosworth likes to accessorize; the Olsens own a nascent fashion empire; Simpson has already dabbled in skin care with Proactiv. Each site is technically members only, although membership is free, open to anyone and requires only an e-mail address and login. Users begin by taking a style quiz, which seeks to determine their taste based on which images they click. Those analytics are used to tailor the experience to the individual and supposedly gets better at predicting one’s taste the more it’s used. For example, Jane from Arkansas likes edgy, gold bangles and never clicks on earrings. Eventually, JewelMint will not show her any earrings. Similar systems are employed by Google Boutiques and Shoedazzle, the shoe club co-founded by Kim Kardashian.

Break it down and BeachMint is really a combination of tried-and-true commerce practices repackaged for the Web. When they were researching the space, Berman and Berdakin studied models like Vente-Privée, the French private sale company that predates Gilt, HauteLook, Ideeli and the entire flash-sale lot. Then they looked at the second wave of push that came with Groupon’s local couponing idea. “The fundamental difference between Groupon and Restaurants.com, which has been around for 10-plus years, isn’t that great,” says Berdakin. “You go to Restaurants.com and you can get a $10 coupon to a restaurant for $5. But it’s how Groupon leveraged social dynamics and gaming dynamics, things like social proofing, perceived scarcity, fear of loss, that made it take off.”

Another factor was continuity. Berman is on the board of U.S. Auto Parts, a publicly traded e-commerce site through which he was introduced to Stuart Goldfarb, who was once ceo of Bertelsmann Direct of the music and book club business of yore. “We call him the godfather,” says Berman. Although JewelMint and StyleMint are set up on a monthly schedule, users are not obligated to make a purchase. True continuity will be introduced with BeautyMint, which will follow an auto-replenish format.

Not least of BeachMint’s concept is the all-powerful influencer. Log on to JewelMint and one can find a series of 30-second videos that capture Bosworth and Coulter casually ruminating over their inspiration boards. Coulter, who also styles Sienna Miller, does most of the talking, her English accent lending an air of stylish authority, which is made approachable by the score, which seems borrowed from an antidepressant commercial, and Robin Leach-like sign off: “As I always say, have a fashionable day,” says Coulter. That it brings to mind something that can be found on basic cable at 3 a.m. is no accident. More than Groupon or Netflix or Gilt, Guthy-Renker, the infomercial behemoth known for such celebrity-endorsed products as Winsor Pilates (Mari Winsor and Daisy Fuentes), Power Trainer (Bruce and Kris Jenner), Meaningful Beauty (Cindy Crawford) and Proactiv, for which Simpson was a spokesperson, has been a major source of inspiration for BeachMint, including the standard practice of a two-year contract for celebrities — which Jill Collage, president of Dualstar, the Olsens’ company, hopes the partnership will go on. “We want it to absolutely expand into different categories, which is why we have the name StyleMint, so it’s not just tied to one thing,” said Collage.

It’s worth noting that StyleMint has a more sophisticated feel than JewelMint. The Olsens are known to maintain a hands-on approach to their projects. They brought in Terry Richardson to shoot themselves as well as model Tati Cotliar in the shirts for the homepage. If the Olsens know the fashion end of the business better than Berman and Berdakin, they’re well aware that online is another world. “E-commerce is tricky,” said Mary-Kate just before StyleMint launched. “That’s something that we’re slowly learning, and partnering with BeachMint has educated all of us about the online retail structure. It’s a knowledge that you need to have almost accumulated from Day One. I feel like we’re learning something new every day.”

For their part, Berman and Berdakin admit they’re on a learning curve too. “Diego and I are Internet guys,” says Berman. “We’re great at starting a Web site, drawing a lot of eyeballs to it and marketing it effectively. We’re not going to pretend we’re the best jewelers in the world or have even ever made jewelry before.” (He declined to release membership details, but at press time JewelMint had 796,353 fans on Facebook; StyleMint, 139,143.)

What they lack in traditional fashion business acumen they make up for in connections — which is what social media is all about — and speed to market. “One thing we took from our experience at News Corp. was the ability to move at Internet speed,” says Berdakin. “I think that’s one of the things we’ve seen as a huge competitive advantage for us as a business. Whether it be our manufacturers or influencers, I think everyone appreciates the idea that it doesn’t take two years to put something together.”

Collage, who had been looking for an opportunity in the online space, adds, “We worked our deal in like three weeks. We liked that you could reach your online consumer immediately with a completely separate brand and create content around it that made sense. We loved that it was accessible. We thought the price point was just right. And we loved the whole idea of the monthly, kind of club feeling. It’s just different than anything we had in our portfolio. It was actually a mission piece.”

Each vertical is essentially two deals, one with a celebrity and one with a manufacturer. Living in Los Angeles, celebrity introductions are easy to come by. Bosworth was set up with BeachMint through her advertising agent, Todd Shemarya, and Berman says he’s known Simpson since she did a MySpace promotion. JewelMint production is handled by Los Angeles-based Lucas Design International, which also manufactures for Philip Crangi, Disney Couture, Kitson and Steve Madden. The Olsens already have deep relationships in the apparel industry, so once they were onboard for StyleMint, which is poised to expand beyond T-shirts, so was Jane Siskin, of Jaya Apparel Group, who does the production for Olsenboye and Elizabeth and James.

BeachMint’s 2011-2012 business plan provides for a new vertical to launch quarterly, with eight in total by the end of 2012. Nothing is confirmed yet, but Berman mentioned pets, wine and wellness as potential “Mints.”

As for where that word came from, it’s simple: “We just liked it,” explains Berdakin. “We thought it was a name that had a connotation of being something fresh and something new and something that’s in great condition.” To wit, BeachMint’s customer support is called Mint Condition.