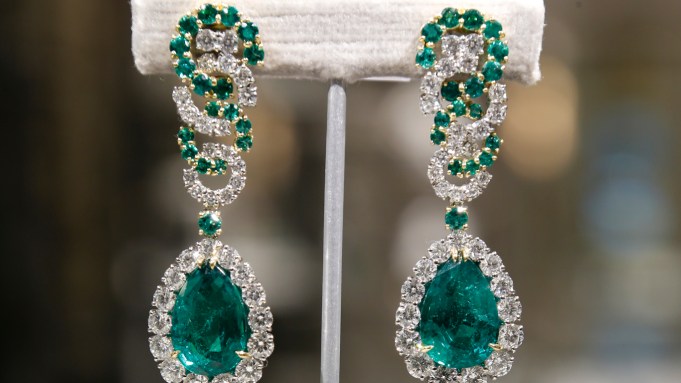 NEW YORK — Bergdorf Goodman has lifted the curtain on its new jewelry salons. The store opened the new department to the public on Saturday, the first finished phase in an ultimately four-step process to completely overhaul its first floor as part of the retailer’s “2020 Vision” plan.

While previously situated in what was the first floor’s foot traffic thoroughfare, the retailer’s jewelry offerings will now be located in a more intimate location, adjacent to 57th Street. The salons will get their own entrance from the street, with a doorway situated between two highly secured, jewelry-specific window displays — a first for the retailer. The store’s jewelry space has not been renovated since 1999.

Bergdorf Goodman’s senior vice president, women’s fashion and store presentation director Linda Fargo — who designed the space with consultation from architect Michael Neumann — called the new salons “a store within a store” because of their individual entry point.

“Think about what we were selling in there — the experience of buying jewelry with people rushing to the elevator behind you is not really the best-selling ceremony for that level of product. We wanted to create something that was still grand, yet intimate,” she said about the updated jewel box layout and visuals.

Further bringing its mantra for “intimacy” into focus, the new salon was conceptualized to include a private viewing room that will host exceptional clientele as well as trunk show events.

“The private gallery is something we didn’t have, and it’s special because we could only have up to a certain amount of product on the floor because of insurance. Now we can use this for special trunk shows and viewings that show that high-high price point,” said Elizabeth von der Goltz, senior vice president, general merchandising manager.

The public salons have been categorized into two overarching price points: Designer pieces, which range from about $1,000 to $20,000 with pieces by Sydney Evan and Armenta, and fine jewelry, ranging from $20,000 to well into the millions with pieces by Lorraine Schwartz, Pomellato and Verdura.

To herald the new floor, designers including Ippolita, Kimberly McDonald and Pomellato have partnered with Gemfields to create one-off designs with the ethical supplier’s Mozambican rubies and Zambian emeralds.

Speaking about what separates the Bergdorf jewelry assortment from other department stores, von der Goltz noted that most other retailers have formatted their jewelry floors as “a series of concessions,” with shop-in-shops designed by individual, lease-holding brands.

Fargo said that, “Our assortment is next to none, about 85 percent of what we curate is exclusive to us in New York.”

In its new home, that assortment will largely be displayed in custom-made, hexagonal cases, as well as faceted display cases recessed into the salon’s walls. While Bergdorf’s has traded its old jewelry interiors’ classic Beaux-Arts motif for something more streamlined, the retailer has not entirely curtailed its flair for glitz.

A duo of custom-made chandeliers inspired by Lobmeyr’s “Sputnik” designs illuminate the new space. Their incandescence is offset by Fargo’s choice to take the salon’s walls from ivory to a shade of “pearl grey.”

“It’s something very impactful. We are shifting the entire palette of the first floor into a pearl grey tone, we had been an ivory store for a while now and are shifting into something very elegant and timeless,” she said. “Timelessness is a very important mantra for us will all of our design decisions. What we do today in my lifetime is not going to be touched again for a long time. With something like a main floor, my feeling is this is definitely going to have to last another 20 years.”

In addition to an enhanced aesthetic, the retailer’s decision to optimize its 57th Street entrance is strategic. Fargo admitted that the entrance had before served as something of a “back door” to the store, but chief executive officer Joshua Schulman said that the entryway will now “echo the grandeur of what we have on 58th Street.”

The update was necessitated, in a way, by the advent of West 57th Street’s real estate renaissance — a stretch that has come to be known as the new “billionaire’s row.”

“Whether it is residential projects like One57 or hotels like the Park Hyatt or The Quin, or whether it is retail like Nordstrom, we understand that there will be a lot of development on West 57th Street. We are right at the corner and believe that it was really time to celebrate that entrance,” said Schulman.

He added that “we really see the corner of Fifth Avenue and 57th Street as the Place Vendôme of New York that we share with great anchors like Bulgari and Van Cleef & Arpels,” he added.

He declined to reveal sales projections for the floor, other than to say that the firm has “high expectations” for its performance.

In moving jewelry out from the centrifuge of the retailer’s main floor, Bergdorf’s can now refocus the merchandising of its other first-floor categories — namely handbags, which are presently scattered in a myriad of locations throughout the store. Their overhaul is the floor’s next matter of business, as part of the retailer’s overall “2020 Vision” plan for refocus and renewal. A renovated handbag department is expected to open in September.