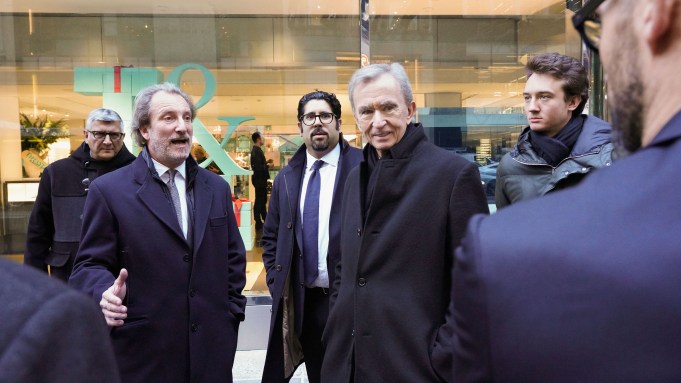 It was lunchtime at Tiffany for Bernard Arnault on Thursday afternoon, as the LVMH Moët Hennessy Louis Vuitton chairman and chief executive officer paid his first official visit to the flagship of his new $16.2 billion trophy.

Arnault perused the store for approximately 75 minutes amid throngs of holiday shoppers and tourists, accompanied by his sons Alexandre (ceo of Rimowa) and Frédéric (strategy and digital director of Tag Heuer), as well as LVMH group managing director Antonio Belloni; Anish Melwani, chairman and ceo of LVMH Inc., and Alessandro Bogliolo, ceo of Tiffany. WWD unofficially tagged along.

Tiffany’s Fifth Avenue flagship is due to close for a two-year renovation in early January. The Art Deco jewel opened in 1940 and represents Tiffany’s heritage as the only enduring American luxury brand, with a $4 billion-strong global reach in annual sales. Last week, Arnault succeeded in his $16.2 billion bid for the brand, representing the largest luxury deal in history.

Bogliolo led Arnault through each floor of the iconic store, trailed by a heavy security detail and palpably anxious store directors. The visit marked a busy day for Bogliolo, as Tiffany reported its quarterly earnings that morning. The New York-based jeweler’s net earnings fell 17.4 percent to $78.4 million, or 65 cents a diluted share, in the third quarter from $94.9 million, or 77 cents, a year earlier. That was 20 cents below the 85 cents analysts projected.

Sales for the three months ended Oct. 31 inched up to $1.014 billion from $1.012 billion with a 4 percent drop in comp sales. Revenues in the company’s home market, the Americas, fell 4 percent to $423 million.

Speaking to WWD the day after the deal was revealed, Arnault made no secret that he believes Tiffany needs a lot of work. “There is a lot of improvement to do — as there is in general for a number of brands — for the stores, the design of certain stores could certainly be improved,” he said.

It was then up to the mezzanine floor, where a stone-faced Arnault spent a particular amount of time in the Patek Philippe salon, the Tiffany flagship’s only third-party vendor which Arnault is said to also have his eye on. The executive was overheard inquiring about the stories behind some of the half-dozen or so watches that he viewed, but additional details of the conversation could not be heard over the roar of holiday season shopping.

After stopping on two administrative levels closed to the public, the clan made its way to Tiffany’s fourth floor, home to the jeweler’s housewares, handbags and Blue Box Café. While Arnault’s presence was lost on the store’s American tourists, some European travelers caught on — with two twentysomething Germans observed giggling in disbelief at the sighting. Sales associates awkwardly grinned and paced about, telling shoppers that the man with the big entourage was the store’s new owner. “We are not so much excited as we are nervous,” said one associate.

Down the spiral staircase and after a quick perusal through Tiffany’s sterling-silver salon, Arnault made his way to the store’s Love and Engagement department on the second floor, where Bogliolo highlighted a portrait of Audrey Hepburn in costume as Holly Golightly in “Breakfast at Tiffany’s.”

Flagship review complete, the group made its way outside to view the brand’s new men’s pop-up next door on 57th Street. The location, which opens Friday, will transition in mid-January to become a temporary flagship once Tiffany’s Fifth Avenue location closes for renovation.

There, Arnault was greeted by Krakoff — who was observed sitting out the flagship tour to help tidy up the men’s store and make adjustments to its merchandising.

It remains to be seen if Arnault will overhaul the jeweler’s current plans for its flagship renovation — which until now had been laid out by Krakoff. Arnault is renowned for his grand approach to flagship build-outs devised in close collaboration with architect Peter Marino.

The luxury kingpin’s decision to bring his two youngest sons along on the visit was interesting. Both in their 20s, Alexandre and Frédéric already have high-profile roles within the company: Alexandre has seen recent success in bringing new life to the German heritage luggage company Rimowa by signing collaborations and sponsorship deals with household names like Supreme and Roger Federer. Belloni, also present Thursday, helped orchestrate the Tiffany deal on Arnault’s behalf.

And Arnault’s holiday season shopping spree may not be over yet: It was reported this week that he may be in talks to purchase the Italian soccer team A.C. Milan.