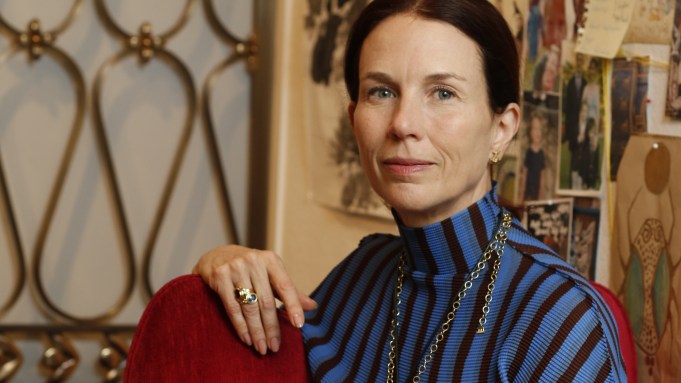 NEW YORK — These are busy times for Temple St. Clair, even by the standards of the fine-jewelry designer, whose work is often referred to in terms usually reserved for art.

St. Clair’s work was chosen to be on permanent display at the Les Arts Décoratifs at the Louvre, making her only the second American to receive the distinction. She completed the final pieces in her Golden Menagerie trilogy for her haute couture jewelry collection, which was introduced Thursday at DeLorenzo Gallery here, which specializes in 20th-century decorative arts, along with a book the trilogy published by Assouline. She’s also celebrating her 30th year in business.

As intense and devoted as she is to her metier, St. Clair matter-of-factly said she “fell into this world of jewelry in 1986.” Armed with a knowledge of art history, she moved in her 20s to the cradle of art, Florence. An errand for her mother to have an ancient coin set in a necklace started St. Clair on her path. When she walked into the goldsmith’s workshop, she said she felt as if she had stepped into the Renaissance.

Besides her haute couture collection, St. Clair designs high jewelry and a collection that’s sold at Saks Fifth Avenue, Bloomingdale’s and Holt Renfrew, among other retailers.

The Gold Menagerie series was seven years in the making. St. Clair said she felt “complete artistic freedom” in designing the haute couture pieces. The final chapter of the trilogy, The Big Game, was completed in August and consists of animals that are extinct or threatened. “They’re romanticized visions of the animals,” she explained. “They’re captured in a moment of stillness or activity in a peaceful environment.”

The eight pieces include a Baiji dolphin bracelet, inspired by the fresh water species that until recently lived in the Yangtze River of China. It features 388.08 carats of Burmese star sapphire, 1.43 carats of Ceylon sapphire and 1.17 carats of diamonds set in 18-karat gold. Ten small dolphins hide within the stones just like the mammals jump in and out of the ocean.

Her study for the rhinoceros ring includes a painting by St. Clair of a mother and calf grazing in the flowers that looks like an Indian block print. The ring with a 33.50-carat aquamarine also contains sapphires, emeralds and diamonds. “It’s a delicate feminine rhino,” St. Clair said. “A flower-power rhino.”

The Big Game chapter also includes a wolf ring, bat ring and leopard ring, where the cat sits on ebony, its body decorated with 7.28 carats of Ceylon sapphire, 0.56 carats of diamonds and 0.04 carats of emerald for the eyes. The jaguar two-finger ring has 1.10 carats of Brazilian Paraiba tourmaline and 0.05 carats of diamonds.

A watercolor study of the wolf in black paint covered with green vines was used for her wolf ring, which is decorated with natural tanzanite and diamond.

“The honeycomb bracelet was inspired by [Salvatore] Dalí,” St. Clair said. “A beehive is a mathematically precise creation in nature.” Bees are in decline worldwide, which explains their inclusion in the series. The bracelet features the geometric perfection of a hive amid a tangle of branches with detail chiseled by Florentine artisans, golden imperial topaz for the drops of honey, emeralds for the leaves, gold bees dotted with Ceylon sapphire, and diamonds.

The designer’s art history background came in handy for inspiration. For example, Marc Chagall’s painting “La branche,” of a bride and groom with sprays of pink flowers, informed the embracing falcon ring.

As a child, St. Clair said she was “a child of nature” who loved the forest and climbing trees, collecting rocks, shells, fossils and pressed flowers. She raised a quail in her bedroom and was snorkeling at age five, discovering sea creatures galore. As an adult, St. Clair traveled to far-flung places such as India, Africa, China and Sri Lanka. It’s no surprise that she’s greatly interested in the natural world.

Chapter two, Wings of Desire, is broken into two parts, the Falconi, three rings with falcons in various positions, and five Super Hero rings including Pegasus and Hippocampus. “I’m a great lover of Audobon,” St. Clair said, noting that on the Assouline book’s back slipcase, there’s a portrait of her holding a saker falcon.

St. Clair on Thursday introduced The Big Game at DeLorenzo, and the Assouline tome. “Temple St. Clair: The Golden Menagerie,” which has a preface by Dominique Forest, chief curator of modern and contemporary jewelry at Musée des Arts Décoratifs, and forward by Adrienne Mayor of Stanford University’s classics department.