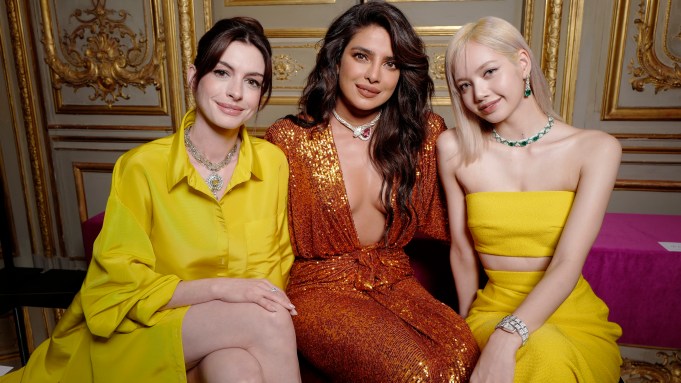 Bulgari unveiled its latest high jewelry collection on Monday night at a gala event in Paris that involved thousands of exotic plants and flowers, hundreds of emeralds, a clutch of glamorous ambassadors — and three NFTs, billed as a first in the space.

Anne Hathaway, Priyanka Chopra, Vincent Cassel and Adèle Exarchopoulos were among the VIPs who filed into the Italian Embassy for the unveiling of Eden the Garden of Wonders, the Roman jeweler’s largest high jewelry collection to date, inspired by nature.

Screams and cheers accompanied the arrival of Blackpink singer Lalisa Manobal, her hair blonde, and her neck and earlobes glinting with diamonds and emeralds.

“Yellow is my favorite color,” she said, referring to her bandeau top and long skirt, which perfectly matched the Valentino outfit of Hathaway, who sat next to her for the fashion show portion of the evening, models twirling in minimalist beige gowns that exalted their precious necklaces, bracelets and earrings.

Just before the show, Hathaway plucked her cell phone from her clutch and snapped a selfie with Manobal. The actress is in the middle of filming the thriller “Mother’s Instinct,” which is set in the early ’60s and requires bouffant hairstyles. “It’s a wig,” Hathaway said with visible relief.

Chopra, poured into a plunging copper-sequin gown by Rosario, gamely posed in front of towering arrangements of flora and fauna.

Turns out the actress, who is filming new episodes of Amazon Prime’s “Citadel,” has something of a knack for gardening.

“I just started an herb garden and it finally produced basil and I made pesto from that basil. So I think I have a green thumb. I’m just not home enough to be able to continuously see if I do,” she mused.

After the show, guests repaired to a transparent tent in the back garden, where a long yellow dinner table — dotted with names of flowers — snaked through the space like one of Bulgari’s Serpenti necklaces, above which was suspended a froth of fantasy flowers.

“This is the pinnacle of clienteling,” Jean-Christophe Babin, chief executive officer of Bulgari, said of the lavish event, which would be repeated on Tuesday night in order to accommodate the large number of high-powered clients who flew into the French capital.

Despite the absence of Chinese clients, restricted from travel due to coronavirus outbreaks there, the Roman jeweler is hosting about 110 couples in Paris, inviting them for private viewing appointments at the Place Vendôme flagship, overhauled by American architect Peter Marino last year. Many clients are sheltered at the new Bulgari hotel, or the George V, a Four Season hotel, across the street.

On view are hundreds of new pieces of high jewelry, as well as high-end watches with “grand complications” for male buyers. The collection will thereafter travel to five or six different cities in China, Japan, Southeast Asia, the U.S. and the Middle East, Babin said.

Over the last year, as COVID-19 ebbed in most regions of the world, Bulgari has seen demand spike for its fine jewelry and watches.

“We can hardly keep up with the demand,” Babin said in an interview, disclosing plans to open a second atelier in Rome that will double its production capacity for high jewelry as the brand continues to invest heavily in precious gems.

Without sharing specific numbers, Babin cited high-double-digit growth in all regions except China, in the “negative double-digits” amid outbreaks of the coronavirus, prompting lockdown and other restrictions.

He cited improvements in traffic over the past week as the main malls in Beijing and Shanghai reopened, suggesting the green shoots of a turnaround. “We are still negative compared to June last year, but not so much.”

At present, fewer than 20 Bulgari boutiques showcase its high jewelry collections. The goal is to get to above 30 as soon as production capacity increases.

Babin cited an increase in the average ticket at Bulgari as consumers continue to trade up in luxury purchases. “They want to see the best,” he explained, flashing a big smile. “More than ever, they are ready to pay more to get a unique piece of jewelry.”

Bulgari is also tempting them with digital versions of its high jewelry: Its Magnifica Ruby Metamorphosis and the Emerald Glory necklaces come with NFT artworks, while the Beyond Wonders NFT represents an “impossible necklace” free of the need to mine and cut exceptional stones, not to mention gravity.

Babin activated the video artwork for the Emerald Glory necklace on his smartphone, demonstrating how it offers an almost endless array of artworks when paused and displayed on a monitor.

The NFTs do not add to the price of the two necklaces but that feature “could increase the value of the necklace in future,” Babin noted.

Bulgari is selling NFT artworks with a limited edition of 10 ulta-thin watches, the Octo Finissimo Ultra, as reported.

She dangled the delicate Emerald Venus necklace, emerald beads and diamonds arranged on fern-like branches that grow around a 20-carat emerald in octogonal cut.

Some of the jewelry is transformable, including the lace-like Emerald Glory, a lace-like collar of a necklace that features a detachable choker, and whose 11 pear-shaped emeralds can be removed and worn as a tiara. Silvestri noted clients can do this on their own “with a tutorial.”

“It’s also a challenge for our artisans,” she said, noting the piece required more than 3,000 hours of handwork — that’s 125 days of labor.

Silvestri described an “emotional moment” when clients discover high-jewelry creations, dazzled by the rarity of the gems and the intricacy of the craftsmanship. Indeed, the designer said she will find it difficult to part with her Color Fantasia necklace. The pink gold neck piece is set with chrysoprase elements, drop briolette-cut paraiba tourmalines, kunzites, rubellites and 30 round brilliant-cut diamonds.

More than a fifth of the high jewelry collection exalts the emerald, a record for the house and a nod to its garden theme.

Silvestri confessed she was nervous before the show, which gathered momentum when Bruni strolled out, prompting a burst of applause.

Later — as her husband, former French President Nicolas Sarkozy, looked on proudly — she would sing three love songs, introducing one of them with a caveat: “This is not ‘Moon River’ from ‘Breakfast at Tiffany’s.’ This is ‘Moon River’ from dinner at Bulgari.”