Biennale des Antiquaires fever has hit Place Vendôme, with many of the square’s fine jewelry residents showing collections that will head to the fair this fall. 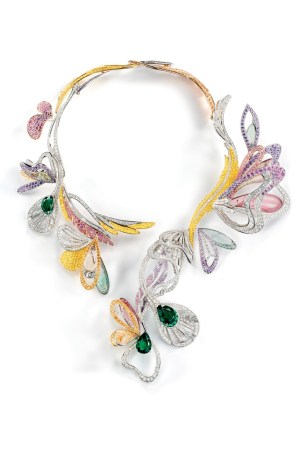 PARIS — Biennale des Antiquaires fever has hit Place Vendôme this week, with many of the square’s fine jewelry residents showcasing collections that will head to the fair this fall.

This story first appeared in the July 3, 2012 issue of WWD. Subscribe Today.

Scheduled to run Sept. 14 to 23 at the Grand Palais, with a scenography by Karl Lagerfeld, 10 jewelers will participate in the event, including Boucheron, Bulgari, Cartier, Chanel Joaillerie, Chaumet, Dior Joaillerie, Harry Winston, Piaget, Van Cleef & Arpels and Wallace Chan.

RELATED STORY: Louis Vuitton Jewelry Gets Its Own Home >>

“After eight years, we’re returning to the Biennale, and we’re coming back strong,” said Pierre Bouissou, chief executive officer of Boucheron, which on Monday unveiled pieces from its first fine jewelry collection under the house’s new director of creation, Claire Choisne. “It’s very much inspired by the archives. The idea was to bring the original creations back to life, with this feeling of renewal, rebirth,” said Choisne, gesturing to a photo of a vintage Boucheron ivy necklace. Its new interpretation is a stunning necklace made of rough gray diamonds in a dégradé pattern that mimics cobblestones, with springs of bright white gold and diamond for the ivy.

For another of Boucheron’s icons, a snake necklace curled into the form of a question mark, Choisne played with the idea of the original piece shedding its skin. The delightful new motif features a rose-cut 10-carat diamond for the head with a mosaic tassel set with opals and diamonds, giving the effect of pixels. Clear rock crystal and opal sections alternate along the snake’s length; inside the translucent crystals reveal caverns of tiny diamonds. The Bouquet d’Ailes (Wing Bouquet) necklace, meanwhile, was sculpted from three types of gold, with Colombian emeralds, carved morganites and tourmalines set in feather, butterfly and dragonfly wing motifs.

As for Chanel Joaillerie, its traveling fine jewelry planetarium is parked on the terrace of the Musée du Quai Branly, under the shadow of the Eiffel Tower. The dome structure, which will be on display in New York in October, is filled with about 80 precious starry creations that pay homage to the 80th anniversary of Coco Chanel’s one-off 1932 Bijoux de Diamants collection.

Since its 1993 inception, Chanel Joaillerie — which in September will open an atelier above its jewelry store on Place Vendôme — has revisited each of the original collection’s five themes: stars and comets, fountains and fringes, ribbons, feathers and suns. Now, for the first time, the house has added a new icon — the lion, which was Chanel’s favorite animal (she was a Leo). Thus for the Constellation du Lion sautoir, a majestic lion is carved from rutilated quartz, standing astride a diamond comet, with a 32.9-carat cushion-cut yellow diamond dangling below.

Two of the house’s jewelry sets also pay tribute to the house founder. They feature a stone pattern with five different cuts of diamonds worked in a motif inspired by the floor of the orphanage Chanel was sent to as a child following the death of her mother.