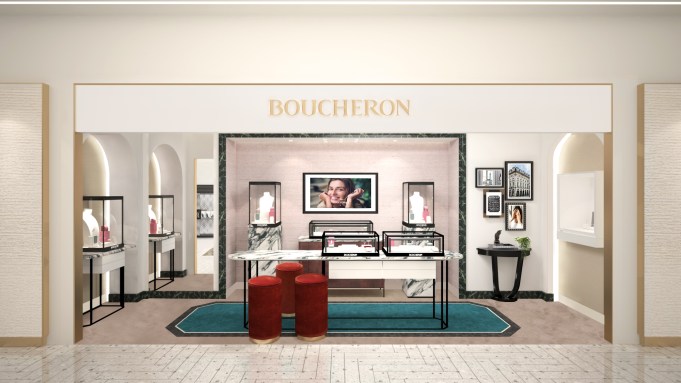 Boucheron and Saks Fifth Avenue see a future in big-ticket baubles. In August the Parisian jewelry maison opened shops-in-shop at Saks stores in Boston and Bal Harbour, Fla. A spokesperson for Boucheron said the Boston market was chosen for its well-traveled clientele and to build upon the jeweler’s Northeast visibility, while Bal Harbour, its first Florida door, is important for the firm’s domestic and international clients, especially from Latin America. The shops increase the brand’s North American footprint, which includes the Vault at Saks and Bergdorf Goodman in New York; Neiman Marcus in Beverly Hills; San Francisco; Chicago; McLean, Va., and Holt Renfrew in Toronto’s Yorkdale neighborhood and Vancouver.

“The U.S. has become a priority for the maison’s retail strategy, where we see an organic and steady growth notably thanks to our significant high jewelry business,” said Boucheron’s spokesperson, adding a company-owned store is on the horizon. “We are currently closely evaluating this opportunity in New York with very exciting news to come on the topic soon.”

Both shops at Boston and Bal Harbour take pieces of Boucheron’s Place Vendôme flagship redesign that was unveiled in 2019. Classic codes of its hôtel particulier’s Parisian architecture and interiors such as molded frames in dark marble and black metal frames are meant to transport shoppers to the mother ship. Measuring 170 square feet, the Boston shop’s graphic vegetal motif draws from the flagship’s nature-inspired Winter Garden section. Part of the recent makeover of Saks Bal Harbour’s ground floor, Boucheron’s shop there totals just over 200 square feet and joins new jewelry shops-in-shop for Chanel, Repossi and Piaget.

The Boucheron spokesperson said merchandise touches on collections like Quatre, Serpent Bohème, Jack de Boucheron, Animaux de Collection and Nature Triomphante, as well as a selection of fine jewelry and special-order creations. Saks plans to host opening events for Boucheron in the fall.