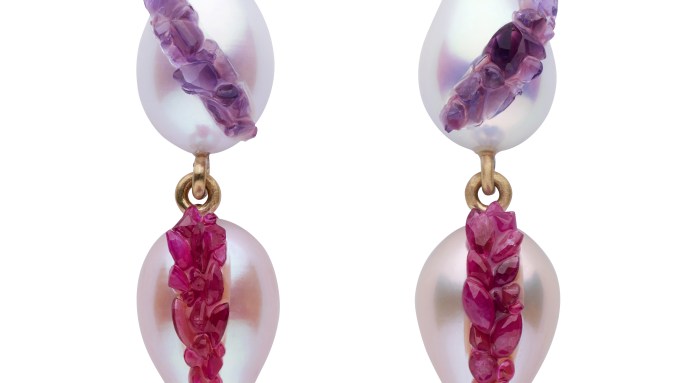 Based In: Los Angeles

Back story: Shepherd has been creative director at pearl retailer Pearl Paradise for 10 years, but six years ago she also decided to branch out and launch her own line that pushed the boundaries of design with pearls. She started with Baroque pearls, adding stone-encrusted metal pieces, and later began cutting pearls in half and setting the insides with jewels to mimic the look of geodes. She spent the last three years exhibiting at the JCK Design Center to learn the wholesale side of the business. “Because I do buying trips to Hong Kong for Pearl Paradise, I’m able to really cherry pick the pearls I use in my own collection,” she said, noting the pointed tear-drop shape pearls she used for one pair of ruby and amethyst-encrusted earrings took her years to find. “People tend to think freshwater pearls are the bottom of the totem pole, same thing with Tahitian shapes, Baroques and drops. I try to incorporate everything — blue akoya peals, keshi and South Sea pearls,” she said. Of the stones she incorporates into her designs, it began with rubies and sapphires, but she’s now also using emeralds, tourmalines and lapis. Of the painstaking process of slicing a pearl in half, cleaning the interior and setting the stones inside, she said, “I have a lot of patience.”

Based In: Santa Barbara, Calif.

Back story: Los Angeles native Lowe, neé Berkoff, was a well-known Hollywood makeup artist when she married actor Rob Lowe in 1991. After selling her cosmetics company to focus on raising two sons, she decided nine years ago to make and donate a gemstone bead necklace for her friend, then-California first lady Maria Shriver, and her Women’s Conference. The “Maria” necklace snowballed into a business, with Neiman Marcus Beverly Hills as the first retailer to pick up the line of antique bead, sterling silver and pavé diamond “beachy working girl or conservative rock ’n’ roll” pieces seven years ago.

Lowe has since been scaling the 26-person business, bringing in financing from a female-led investment fund, hiring a chief operating officer and developing signature, seasonal and gold collections that sell to 75 doors nationwide. This fall, she will also launch men’s in three Neiman Marcus doors including Hudson Yards. Couture 2018 marks her first jewelry trade show.

“I’ve held jobs since I was 16, and I’m lucky that my husband recognizes that I’ll always need to work. I’m also fortunate that I’m able to donate a portion of proceeds to women’s and children’s organizations, as my way of giving back,” said Lowe, who, with her husband, was honored with this year’s UNICEF Global Philanthropist Award.

Based In: New York

Back story: Boston native Wallach’s mother, grandmother and great-grandmother all designed their own jewelry, but after studying design at FIT, she segued into interior design, both residential and for television. After Hurricane Sandy destroyed her home in the West Village, she decided, “I did not ever want to renovate a home again. I had one of those life moments where I wanted to go back to my first love.” She had always designed jewelry for herself and her friends, repurposing their old pieces, so she took some classes and found mentors like Cindy Edelstein and an FIT professor who guided her through developing her first set of samples. Her love of vintage and Art Deco architecture informs her geometric designs (the Chrysler building is a recognizable motif), as well as her materials, such as agate, onyx and emerald, some of which she cuts into lesser-seen kite shapes. Her latest collection, Dorothy, is named after both her grandmother and pioneering interior designer Dorothy Draper, and features a more feminine fan motif that was inspired by her grandmother’s Deco perfume bottles.

Back story: Although Nadine Aysoy was born into a family of diamantaires in Antwerp, Belgium, she first worked in investment banking as a way to support herself and her son. A few years ago, she decided to follow her true passion, training as a gemologist and launching her namesake collection earlier this year. Her debut collections — Tsarina, Petite Tsarina, Elle et Lui and Mille et Une Feuilles  — play on floral, geometric and nature-inspired motifs in white, rose and yellow 18-karat gold, set with fancy colored diamonds, South Sea pearls and precious gemstones.

“I am fascinated by the seasons and how they prompt changes in the environment, especially contrasting textures and colors,” said Aysoy. “Light is another incredible source of inspiration; how it passes through a piece of jewelry is a vital consideration in the design process.” She also balances out larger gemstones with delicate metalwork to keep her feminine aesthetic.

This year Aysoy is adding new elements to each existing collection, including bigger statement earrings with stones such as chalcedony, jade, mother of pearl, opal and coral, to create new textures, transparencies and brilliance, and different cuts, such as the briolette.

Based In: New York

Back story: Dhanak comes from a lineage of traditional goldsmiths. She grew up in Dubai, where her grandfather, who moved there from India in the Fifties to expand the family business, frequently took her to their gold workshop. Dhanek draws inspiration from abstract art, architecture and natural landscapes and gravitates toward geometric and asymmetric elements. Made from 18-karat gold and diamonds, most of Dhanak’s jewelry is still made in the same family-owned workshop she frequented as a kid. Her most recent collection, Staple, is inspired by the shape of a staple pin. Dhanek said she wanted to take an everyday, non-glamorous object and turn it into luxury. The collection was developed to look as though inverted diamond staples are holding the pieces of gold together.