The brand is introducing a new more laid-back aesthetic and more accessible day pieces with is new campaign, as well as amping its digital strategy.

By Natalie Theodosi on September 2, 2019

A visual from the new David Morris campaign.

LONDON — British jeweler David Morris has been looking to future-proof itself and adapt to the needs of a faster-paced, digitally driven market.

This isn’t an overnight strategy shift — the jeweler has started introducing lower-priced fine jewelry pieces to complement the high-ticket timepieces and high jewelry ranges it has been known for, over three years ago.

The company also launched its own e-commerce platform last year, but it’s now amping up its digital strategy with a launch on Moda Operandi, followed by Farfetch later this year.

“I think what we suffer from here is the lack of brand awareness, probably our biggest pitfall. So I think the best way for us to create brand awareness is by going digital. If we are collaborating with other people’s platforms that have great traffic coming through, it’s a great way for us to develop this awareness,” Jeremy Morris said in an interview.

According to the company, in the first few days of trading on Moda it reached 250,000 pounds in sales and managed to draw traction around its more edgy, colorful pieces that are shown alongside of-the-moment fashion labels to create an assortment that’s different to what one might find in the brand’s Bond Street shopfront.

Moda stocks a combination of fine jewelry pieces — where prices start at 5,000 pounds — as well as one-off, high jewelry items that are mostly sold through the retailer’s personal shopping service. The same strategy will apply with Farfetch, which will also stock some of the brand’s timepieces.

Including a wider variety of products and price points has been a key shift for Morris. “Our client base was too narrow. Being a purely high jewelry brand is very limiting and we needed more people through the doors, especially as we expanded our retail footprint with two stores in Paris. We need traffic, people coming through the doors. If you’re selling things for 1 million or half a million [pounds] it becomes very limiting, you’re going to make one sale a week or fortnightly,” he said.

That’s why in the brand’s new campaign, which is set to break in the September issues of leading fashion titles, Morris made a point to mix fine and high jewelry items for the first time.

“The campaign features a combination of pieces, ranging from 5,000 pounds to 20 million pounds. A lot of people who knew the brand never thought or realized that David Morris had such accessible, casual day jewelry, but now the volume of pieces we sell has increased significantly,” he added. 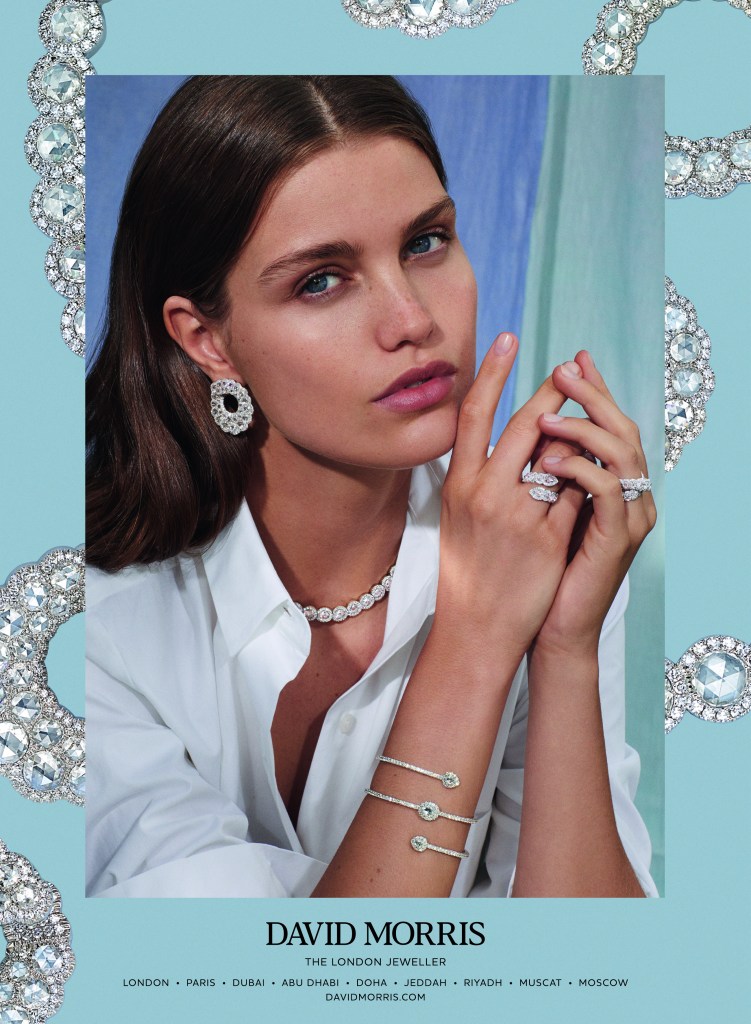 A visual from the new David Morris campaign.  Courtesy Photo

The campaign also highlights a renewed communications approach. Shot by the British contemporary artist Quentin Jones, it features fuss-free, colorful portraits where both the model and jewelry on display are little retouched.

“We wanted to create something that was a little more commercial and accessible. The problem with communications in the high jewelry world was that everything was a little stand offish, not very accessible and very high, rich, polished. We wanted to soften the whole thing up and create something that would draw people in instead of pushing people away,” Morris added.

While the brand opened a store in Saudi Arabia earlier this year — the Middle East, alongside India and Kazakhstan make up the company’s biggest markets — further brick-and-mortar expansion is not in Morris’ plans.

“I am in no rush to open new shops. You can build a store, but it takes three to five years for people to settle down and start coming through the door — it’s a long process. Digitally, you can get much quicker growth,” he explained, adding that focusing on connecting with the brand’s client base on social media and working with key retail partners has taken over his priority list. “We have made our Instagram shoppable at the beginning of the year and we get a lot of requests through Instagram for pieces up to and even around a million [pounds] sometimes, which is very important for us. They usually enter the brand through Instagram and they will go on to our web site to look at something larger, then make an inquiry or come into our stores.”

A shop-in-shop with Bergdorf Goodman is also in the works for January, building on the traction the brand has had on its web site from U.S. clients, who make up a quarter of the site’s traffic.