Asia continues to be a focus for the brand's retail expansion under new owner Compagnie Financière Richemont, said Gianluca Brozzetti.

MILAN — Nine months after Compagnie Financière Richemont’s acquisition of Buccellati, and despite the hurdles created by the coronavirus pandemic, chief executive officer Gianluca Brozzetti is pleased with the progress made — and the long-term prospects for the brand under the new owner.

“We are laying the grounds to celebrate Buccellati’s second century in business,” said Brozzetti, with a reference to the brand’s centennial anniversary last year.

Surely, ensuring a future for the brand has been a priority for Brozzetti, who joined Buccellati in September 2014. Before the sale to Richemont, sources said Buccellati’s founding family and its management were concerned and frustrated about the lack of investment in the brand under the previous owner, China’s Gangtai Group Corp. Ltd.

Brozzetti touted Richemont’s support and strategy of continuity. “The group believes in the brand and in the project, it respects its heritage and the work done so far.” Buccellati flanks Richemont’s Cartier and Van Cleef & Arpels jewelry brands.

Continuity involves Brozzetti staying on to lead the company. He is a respected executive in the luxury sector as a former ceo of the Roberto Cavalli Group, and before that held senior roles at Asprey, Bulgari, Gucci Group and Louis Vuitton. Andrea Buccellati was also confirmed as honorary chairman and the brand’s creative director.

Buccellati was founded in Milan in 1919 by Mario Buccellati, and is known for its delicate designs in gold and diamonds. The pieces are made with techniques dating back to the Renaissance, and Buccellati is also active in the fields of watchmaking and silverware.

One of Buccellati’s core jewels is the Eternelle ring, where gold is handcrafted like lace, decorated with engravings and precious stones.

Continuity in terms of brand positioning is also reflected by the new advertising campaign fronted by Beatrice Borromeo, a former model and journalist and wife of Pierre Casiraghi, grandson of the late Prince Rainier and Princess Grace of Monaco. Borromeo is the daughter of Carlo Ferdinando Borromeo and the late Marta Marzotto‘s daughter Paola Marzotto.

Brozzetti said the campaign was the fourth episode of a “timeless beauty story” that started with Peter Lindbergh in 2015, fronted by model-actress Elisa Sednaoui and photographed in Milan, which was followed by Venice in 2016. The following year, Lindbergh lensed actress Zhang Ziyi and Caroline Murphy in Florence. This year, it’s the turn of photographer Josh Olins and the city chosen is Rome — an additional reference to Italy and the brand’s local craftsmanship — “but not in the obvious touristic sites,” said the executive.

As in previous ads, the idea is to portray Borromeo, who is also a brand ambassador, in different moments of her daily life to drive home the message that Buccellati’s jewels can be worn on both formal and informal occasions. “The images are very natural, and her personality and profile perfectly fit with our positioning,” Brozzetti observed. “She has always worn our jewels, ever since she received them as gifts when she was a child.”

The COVID-19 pandemic slowed down a number of existing projects, said Brozzetti, but no changes are being made to the strategies he has mapped out with Richemont.

The expansion of Buccellati’s retail network continues to be a focus. Earlier this month a store opened at Plaza 66 in Shanghai  and in September a flagship will open in that city at the IFC Mall in Pudong, next to Van Cleef & Arpels and Prada stores. “It’s a very prestigious location,” said Brozzetti proudly. 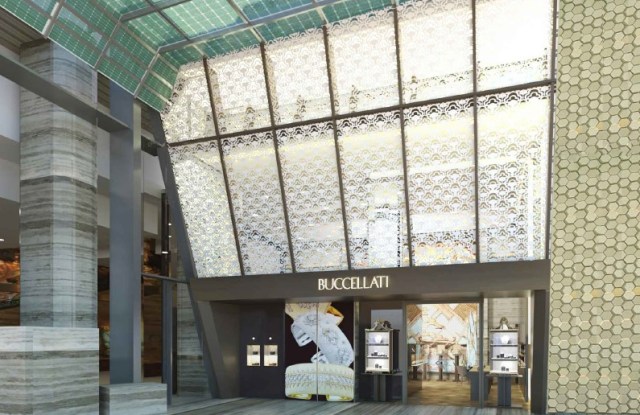 A rendering of the Pudong store.  courtesy image

In January, the company will open a unit in Chengdu at the IFS mall and it is also negotiating a second unit in Hong Kong.

“Asia continues to be a focus,” said Brozzetti.

The company is also planning the opening of a two-story store in London’s Albemarle Street in September.

The stores are all modeled after a blueprint conceived by Andrea Buccellati and Milan-based architects Vudafieri Saverino Partners five years ago, but Brozzetti said small changes are always introduced. For example, at Shanghai’s Pudong store, the facade will show an inlaid motif — a reference to the inlaid wood featured inside.

There are a total of 50 stores globally, including shop-in-shops and corners and the brand is available 150 points of sale.

The U.S. is historically a key market for Buccellati, but business is balanced between all regions. Europe accounts for one third of revenues, and Asia and the U.S. each also for a third. As per Richemont’s policy, Brozzetti declined to disclose Buccellati’s revenues.

The company is working on a complete renewal of its web site, keen to leverage the potential of an omnichannel service.  The brand first became available on Net-a-porter in mid-2017 and Brozzetti said it has “done interesting business” in China with Feng Mao, the venture formed by Richemont and Alibaba.

“Not only entry price jewels are selling well online,” he said.

Prices of Buccellati jewels span from 2,000 to 30,000 euros. Among the bestsellers, said Brozzetti were the Macri and Opera Tulle collections. With Richemont, there is also an additional push on the brand’s silverware designs and the gifting world.

Despite the increase in the price of gold, Brozzetti said Buccellati is absorbing the costs. “We are monitoring the situation and not increasing our prices now. The price of gold says a lot about the importance of hard luxury at this moment. Observers believe jewelry will overcome the moment better than other categories.”

In September, the company will inaugurate new headquarters in Milan in Via Brisa in a storied building designed by architect Piero Portaluppi in 1919 — the same year Buccellati was founded, remarked Brozzetti.