Building an Accessory Brand From China

A few expatriate designers are taking a different approach — coming from the U.S. and Europe to launch their brands from within China. 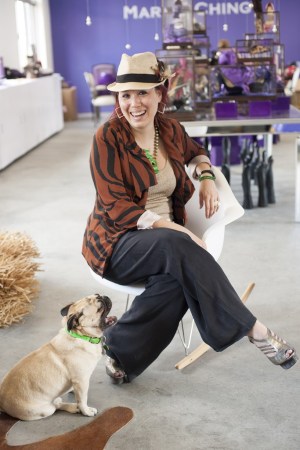 As international brands scramble for their share of China’s growing disposable incomes, a few smaller players have taken a different approach — coming from the U.S. and Europe to launch their accessories brands from within China.

Knowing the market from the inside and introducing an international design perspective in a fast-developing market certainly would seem advantageous for a fledgling accessories brand, and proximity to affordable materials and a plethora of factories can’t hurt. But there is the problem of counterfeiting to consider, not to mention the language difficulties and an inherently different business, creative and purchasing culture to contend with.

A self-described “born and bred New Yorker,” Fiona Kotur is one of these expatriate designers making their way in the Middle Kingdom, though she has managed to forgo some of the most difficult aspects of the China experience by basing herself in Hong Kong, where the residual influence of British colonial rule — including the universal use of English — make life as an expat accessories designer somewhat easier than in Mainland China.

Arriving in Hong Kong a decade ago as a trailing spouse — following a husband who had been posted to the Special Administrative Region for his work —Kotur’s résumé included stints at Polo Ralph Lauren and Old Navy.

Not long after arriving in Hong Kong, Kotur was tapped by Tory Burch to help set up her initial business and after that adventure, she was ready to go it alone. Kotur the brand was born and Fiona Kotur’s handbag designs are now sold in the U.S. at department stores such as Neiman Marcus and Saks Fifth Avenue with prices ranging from $250 to more than $2,000.

Primarily known for her minaudières, Kotur said although there is little discernible Asian influence in the aesthetic of her collections, life as an accessories designer in Hong Kong has much to recommend in terms of convenience.

“Living in close proximity to manufacturing is the biggest advantage to working as a designer in Hong Kong,” she said. “The ability to share techniques and oversee production, and build critical relationships with manufacturing partners is very important as much of the creative process occurs during sourcing and manufacturing.”

Often labeled in the press as “China’s Jimmy Choo,” shoe designer Alison Yeung agreed that proximity to factories is a major advantage for her footwear brand, Mary Ching.

“Working in China means we have a much closer proximity to our sources —rather than e-mailing the factory, we can visit them and physically touch the product,” Yeung said, adding that, in her case at least, another advantage to working in China is the way in which the Chinese market has embraced the brand as one of their own.

“By working in China, we’ve come to be accepted as a Chinese brand. As of recently, there is a new generation of luxury stirring up in China with an increased interest from discerning luxury consumers in ‘buying local’ and supporting local talent. It’s the perfect place to be at this time. We have the advantage of being based in Shanghai, but also having an international outlook,” Yeung said.

Known for her sexy stilettos, playful flats and delicately textured cashmere slippers, Yeung, who was raised in London with an English father and Chinese mother, claimed the move to China in order to start her own footwear brand made a lot of sense.

“I’ve traveled all over the world and lived in different places — Italy, France, Australia — but the first time I visited Shanghai and felt the energy and vibrancy of the city, I saw an opportunity to create a home for Mary Ching and a chance to come back to my roots and embrace my heritage,” she said.

Still, there are challenges to building high-end accessories brands in China, the world’s second-largest economy. Despite the country’s fast-paced development, there is a lack of a design culture in China, where designers often emulate more than create. Although this attitude is starting to change, there is also some residual stigma attached to the “Made in China” label as a marker of cheaply made, mass-produced products.

“The biggest misconception of being a Chinese brand is the attached stigma of ‘Made in China.’ People assume that the products made in China are necessarily cheap copies — unoriginal. They don’t think that Chinese designers can be pioneering,” Yeung admitted, adding that a new generation of luxury-goods designers is making it their mission to turn around the image of products made at home.

“China has had a long history of producing high-quality innovations; it was only recently that this ‘Made in China’ stigma arose. More recently, I think the media has drawn attention to China’s capacity to both consume luxury products, and also its growing ability to create luxury products of the upmost quality,” said Yeung.

Korean-born, though Canada and U.S.-raised, Currie Lee is another member of the new generation of China-based accessories designers hoping to prove this generalization wrong. Like Yeung, Lee embraces her Asian heritage in the creation of products for her Beijing-based handbag brand D-Sata — the name stands for “Dim sum of All Things Asian.”

She is quick to cite counterfeiting as another major disadvantage of life as an accessories designer in China. The problem has plagued D-Sata throughout the life of the brand and the practice is so blatant and widespread in China, Lee has little hope of anything changing in the immediate future.

“Although counterfeiting is a concern in many other countries, due to the large number of factories in China, it has been challenging as there have been several instances of friends or clients visiting factories or trade shows and seeing counterfeit D-Sata accessories,” she said.

Lee moved to Beijing in 2006, but not with an accessories empire in mind. In Lee’s case, the catalyst for her China move was the desire to study Chinese law at Peking University. But it wasn’t long before her design talents were encouraged by a friend who also happened to be a former editor at Vogue China and Lee “retired” from the law to start D-Sata in 2009.

D-Sata’s collections — each bag is limited to three to six pieces for minaudières and 12 to 15 for other models — are priced from $150 to $5,000, with the top end of the range created from exotic materials, recycled from animals that have been consumed at local restaurants, including water buffalo horn and bone (a good substitute for ivory), shellfish, ostrich and skin from snakes, frogs, crocodiles and stingrays.

Design was a lifelong passion for Lee, who started along the path to accessories design as a young girl cutting up her mother’s haute couture pieces to re-create fashion week with her Barbie Dolls as models.

“The most devastating of which was a vintage silk, feather and sequin Christian Dior flapper dress,” the designer recalled.

In its three years of existence, D-Sata has become a darling of the Chinese fashion media and caters to an exclusive and newly minted Chinese clientele of fashionistas, socialites and celebrities who are looking for more than a prominent label on their handbags.

“Our customers no longer need to prove their worth with luxury labels and ‘statement pieces’ but are rather seeking a ‘conversation piece’ that no one else has,” Lee said. “Our clients are too sophisticated to ‘status shop,’ and for them Hermès Birkins and Kellys are no longer exclusive as they are everywhere.”

For Shanghai-based designers Joanne Swift and Marion Rosset — who hail from the U.K. and France, respectively — being close to affordable materials and the freedom of being on the front lines of a developing market, where rules are few and far between, can be both frustrating and incredibly rewarding.

Swift’s jewelry brand, Josie Chen, has become a mainstay of the local design scene over the past five years, often spotted at the increasing number of markets and creative fairs held in China’s financial capital. The brand has garnered a reputation for handmade statement jewelry with a rock ’n’ roll edge, featuring plenty of chains, as well as some semi-precious stones.

Rosset, on the other hand, is a relative newcomer to the scene, starting her own “head candy” line, The Hat Lab, after working for other Shanghai-based designers in marketing roles. It was through this work that a chance encounter at Paris Fashion Week with Brazilian hat designer Ricardo Costa led her back to Paris to train at the Mod’Art Fashion School with Jean-Paul Gaultier’s favorite milliner, Jean-Pierre Tritz, as a mentor.

After graduation, she came back to Shanghai to spread her passion for millinery to a new market. Though hats and headpieces are still far from common in China, Rosset embraces the educational elements of having a millinery studio in Shanghai as one of the necessities of being both a designer and pioneer.

“It’s a whole process I have to go through to slowly educate my local customers on how to wear the designs, to get them to try on the designs and convince them they might be ‘hat people’ after all,” she said.

The Hat Lab’s vintage-tinged collections are inspired by Rosset’s international life of travel — featuring patterned-silk turbans and military-style caps — and are sold in Shanghai boutiques and online for between $20 and $150.

Despite the differences in their backgrounds and experiences in China, one thing that unites these designers is an appreciation of the freedom China gives them to build their own accessories brands, without having to conform to the entrepreneurial norms of the West. Significant start-up capital and an established reputation are not as important in a country where materials and labor are significantly cheaper and few questions are asked about experience and qualifications. China buzzes with possibilities and these expatriate designers have saddled up for the wild ride.

“Just over 25 years ago, the population was heavily conformist — there was no individualism or customization, everyone was wearing blues and grays,” Yeung explained. “Now it’s all changing, women want something new, daring and exciting, and we’re providing it and enjoying the freedom as much as the population is.”