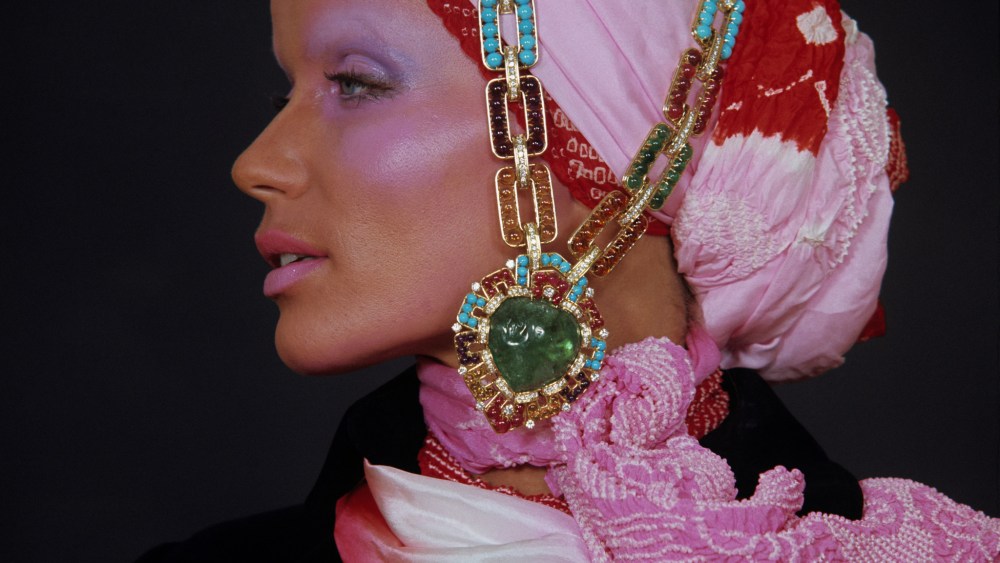 Andy Warhol. Cher. Elizabeth Taylor. These were the figures pivotal in making Bulgari the success it is in the U.S. today. This week the jeweler is celebrating its 50th anniversary in America, by looking back with reverence toward its history and forward with an aggressive business strategy that hopes to establish the country as the jeweler’s largest global market.

Nicola Bulgari, the firm’s vice chairman and the man responsible for bringing the brand to the U.S. in 1972, and Jean-Christophe Babin, Bulgari’s global chief executive officer since 2013, spoke in conversation with WWD about the company’s history-making designs and how that heritage will be leveraged to chart its next era of success.

On Wednesday night, Bulgari will mark its half-century anniversary with an event at the new Aman Jazz Club with a performance by Dev Hynes and VIP attendees. The jeweler has also issued a limited-edition run of its collectible Monete designs — necklaces made of ancient Roman coins set in 18-karat gold — to mark the occasion, along with a new retrospective book titled “B is for Bulgari: Celebrating 50 Years in America,” due out Dec. 1.

But it took a long way to arrive at this point. When Nicola Bulgari arrived Stateside to set up the business’ first store outside Europe, Bulgari — founded in 1884 — was already well known among the jet set. For those visiting Rome, Bulgari was a shopping destination, appreciated for its liberal use of bright gemstones and generous proportions of buttery gold — all presented with Southern Italian charm. “It was decided that it was time to cross the ocean and start in the big country,” Nicola Bulgari said of his family’s 20th-century ambitions.

While Bulgari now has nearly 220 global stores, 18 of those in the U.S., at the time it only had two boutiques outside Italy — one in Geneva, Switzerland, and another in Paris. In the U.S., the brand initially took a modest approach and set up a shop inside the Pierre Hotel in order to attract a built-in tourist business.

Bulgari arrived in the U.S. in the throes of a cultural revolution, a time when music, arts and movies had achieved a new level of global reach. The jeweler’s designs, which had a more casual attitude than competitors like say, Cartier or Van Cleef & Arpels, resonated with a blue jeans-wearing American audience.

Looking to establish inroads even further into the heart of America, Nicola Bulgari took his family’s gems on the road — hosting trunk shows in Texas, Oklahoma, Tennessee and Chicago. As Bulgari became a fixture of ’70s glitterati, Nicola Bulgari mingled with some of the era’s most important tastemakers — but did so, he said, on his own terms.

“Andy Warhol was in love with what we had — I was so stupid, I didn’t understand what he was doing and I did not accept his offer to trade jewelry for art. How dumb was I? Studio 54 was a legendary place, but I wasn’t the kind of guy for it. I went a few times and I wasn’t a fan. The fact that somebody like Warhol had an interest in Bulgari though tells you the kind of people we were attracting — people were very curious to come see what we were doing,” Nicola Bulgari said.

Bulgari’s reputation as a jeweler grew so strong in the ’70s that it became an emblem of Hollywood and taste-making culture; fodder for celebrity tabloids, particularly in the divorce of Elizabeth Taylor and Richard Burton. By 1977, Bulgari’s reputation became so outsized that it attracted less desirable clientele as well.

During one private client meeting at The Pierre hotel, a four-carat diamond ring went missing from a larger tray of gems. “It was so uncomfortable, we were not able to accuse the guy — the insurance paid it out,” Nicola Bulgari recalled.

But about a year later he received a call “from a policeman somewhere in Michigan and said, ‘During an examination of the body of so-and-so, we found a ring.’ It was a mob guy from Michigan who was murdered and they performed an autopsy and found the ring — he had swallowed it. We got the ring back and it was sold again,” Nicola Bulgari said. At the time of its recovery, the ring was worth about $35,000, or nearly $160,000 in today’s value.

The brand continued its expansion — perhaps too much so. A heavily marketed fragrance and leather goods business led Bulgari down a path of over-distribution. In 2011, the company was acquired by LVMH Moët Hennessy Louis Vuitton, and two years later, Babin was placed at the helm to help refine and grow the Bulgari vision on a global scale.

“Everything we are trying to do is to get back to where Nicola was with the jewelry. We are first and foremost a high jewelry brand and are much more discreet on the leather goods and fragrances. Five years ago, our fragrances were in 3,500 stores and at the end of this year it’s less than 400. We are refocusing on really high jewelry and watches,” Babin said.

He feels that refining Bulgari’s image also requires a more controlled approach to retail and store environments. “From a distribution standpoint, we have reduced the number of multibrand wholesalers to make sure everything converts into one single message, that you are in a Bulgari environment designed by Peter Marino with Roman design and architecture in mind. Bulgari is a different style of jewelry, but also has a unique Roman voice with a culture of interacting with clients that you can only provide in your own store,” Babin said.

He added that in the U.S., Bulgari has “the youngest network of stores” that have been mostly renovated within the past six years. Recent openings like Washington, D.C., demonstrate “how we are really in a conquest approach, just because we know how big the U.S. can be,” Babin said.

Nicola Bulgari said LVMH’s resources have “completely changed the awareness over the last five or 10 years. The means invested in the company was such that Bulgari became stronger against big houses in the States. The line of taste has continued, though, and the quality is there. The design and imagination will never change — it’s what makes Bulgari world famous.”

Babin said Nicola’s continued involvement in the brand is a major “advantage.”

“We are the only global jewelry company with the same family involved; most jewelers have lost the original family. LVMH has been very wise to insist on having two Bulgari family members on the board. It’s an amazing asset and truly helps us to better understand our roots and history and be more consistent when projecting Bulgari into the future,” Babin said.

Now with 50 years in the U.S. under its belt, Babin is preparing Bulgari for continued success. He has just named Hervé Perrot the jeweler’s new president for North America. Perrot is an LVMH veteran and most recently led Dior in China.

The U.S. is not Bulgari’s largest global market, but it seems like Perrot has been tasked with changing that. “We have huge potential in the U.S., and compared to other brands we are not there and I know we can get there — but I’m not sure in how many years. We have gained credibility, desirability and a much stronger image. As part of a much bigger company globally, I know we have the resources to fulfill our mission,” Babin said of his outlook.

The diverse group was purposely chosen in order to appeal to a younger U.S. client.

When asked if there is a specific area of the U.S. that Babin is targeting, he said: “We don’t reason by geography but more by client profile. We’d rather go after younger clientele because we know clients that have been with Tiffany and Cartier for generations have developed a loyalty that’s hard to challenge. We are not only looking at a younger generation but a different community profile, like Silicon Valley or the Latinx community who appreciate our colorful style maybe more than a northeastern community, which is typically more influenced by historic jewelers that settled in America before we did.”

While Babin has been at the helm of Bulgari for nearly a decade, LVMH’s jewelry division continues to evolve. Babin is now relying on his “good friend,” Anthony Ledru, the CEO of LVMH’s latest crown jewel Tiffany & Co., for advice on the booming American jewelry market.

On Tuesday, LVMH revealed that its watches and jewelry division had grown 16 percent in the third quarter, largely attributed to Tiffany’s “strong momentum” in the U.S.

Babin sees this as an asset. “With Tiffany we are competing, of course, as we compete against other brands, but I myself am a very good friend of Anthony and we share experiences and discuss between ourselves on what could be the outlook of the American market short-term. So we build a better understanding. We know Tiffany is ahead of any competitor and we can learn a lot from that,” he said.

The executive acknowledged that, “2023 won’t be as buoyant as 2022 because 2022 so far in the U.S. has been extraordinary, but [jewelry] should be the category to get through 2023 as one of the best. When you build a luxury brand in a big market like the U.S., you have a 20-year vision — you have better years and more challenging years, this doesn’t change the strategy. We want to have bigger stores, we want hotels and we will announce them when we are ready.”