The Rome-based jeweler is including genderless designs to its new Serpenti Viper collection, due to be rolled out in stores in December.

MILAN — The snake has been a recognizable Bulgari symbol since the Forties, and now the Rome-based jeweler is adding yet another layer of modernity by introducing genderless designs to its new Serpenti Viper collection, due to be rolled out in stores in December.

“The name is strong, it telegraphs a more dangerous and aggressive snake, energy, dynamism and speed,” explained Bulgari’s chief executive officer Jean-Christophe Babin. “Snakes are linked to the history of Rome — you think of Cleopatra, strength, power and seduction.”

Bulgari is stepping up its response to a market request and showing it is making a play toward diversity and inclusion, while attracting a younger customer. In February, the luxury company presented in New York a unisex version of its successful B.zero1 ring called Rock, which Babin described as more masculine and attractive to men.

Viper is characterized by more geometric and stylized lines and comprises necklaces, earrings, rings and pendants, all crafted from gold in white, yellow and pink tones. Some models also feature precious diamond pavé sets and customers are offered the opportunity to customize their purchases with dedicated engravings.

Bulgari’s craftsmanship is reflected by the scales of the snake, hinged together by hand, and its distinctive wrap-around construction, either single or double. 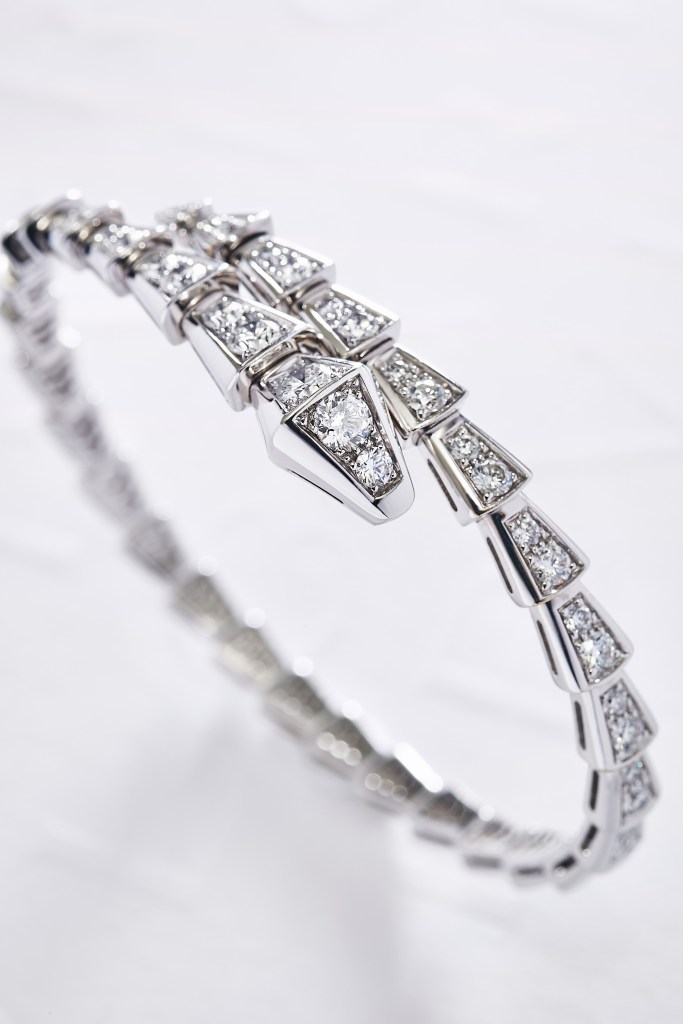 Asked whether Bulgari has faced problems in securing stones during the lockdowns and government restrictions caused by the COVID-19 pandemic, and to discuss the increasing price of gold, Babin admitted that “many mines are closed, or working at a reduced pace, but we have not had issues with the supply of diamonds.” The executive said the availability of gold is not a problem, but that Bulgari will have to raise its prices to recover margins. “We are compensating with industrial efficiency but the price of gold is up 27 percent to $1,900 since November 2019,” he pointed out.

Babin said he expected “a good Christmas” for Bulgari, and was looking ahead to the Chinese New Year, St. Valentine’s and Mother’s Day — all conducive to jewelry purchases — despite the past six months of weakness. “We’ve seen increased customer demand since the summer, and local markets are positive again, but we’ve not recovered the loss of tourists’ spending, especially in Europe. Purchases are more impulsive when traveling and more planned when at home.” Online business is also strong, but it can’t compensate for the stores closed during the lockdowns, he said.

Business has picked up in Russia, China and Korea, as well as in the U.S. and the Middle East.

“There will be economic uncertainties and it won’t be an easy 2021, but there will be lots of opportunities for those that will know how to innovate and focus on product and communication,” he said.

According to the Bain & Company and Altagamma Worldwide Luxury Market Monitor presented this month, sales of jewelry decreased 15 percent to 18 billion euros in 2020. Business was sustained by growth in the Asia-Pacific region, mainly China, and an acceleration online. The category remains polarized, with high jewelry and iconic entry-priced items leading the recovery. “High jewelry holds its value,” concurred Babin.

He said that “customer demand for daily wear jewelry is resilient.” While the pandemic and its consequences may be affecting families’ budgets, “it is also true that there are fewer options to shop, and even more now that people can’t travel, which frees up some funds. The appetite for jewelry has not changed — you want to be desirable, celebrate an anniversary or be self-indulgent.”

To respond to pent-up demand, Bulgari is working on a new plant that will double the space of its existing offices and manufacturing plant, inaugurated in 2017 in Valenza, the historic jewelry hub located between Milan, Turin and Genoa, and then billed as the largest in Europe . “Ideally we will start building in 2022,” said Babin. At the same time, the company plans to expand its high jewelry atelier in Rome in 2022, which already was doubled three years ago.

“We don’t want to lose talent, and we are positive on prospects. We can consider COVID-19 as a parenthesis. Mind you, we’ve suffered, too, had furloughs in the U.K., turned to wage support measures in Italy, but we are stronger and more agile, and we have what it takes to grow in 2021.”

In the summer of next year, Bulgari will open a new hotel in Paris, and in 2022, Babin expects to open hotels in Rome and Moscow.