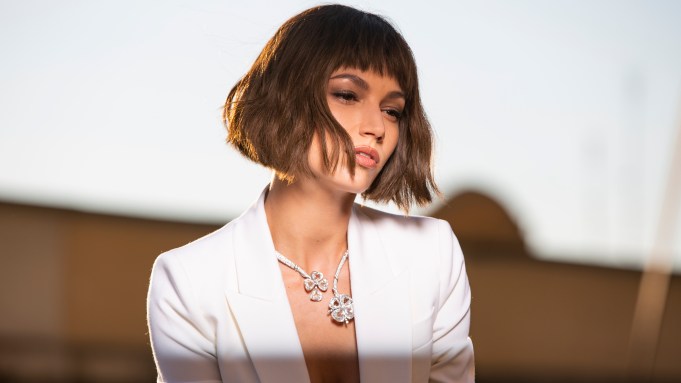 DUBAI — Bulgari unveiled a new icon for the house, a collection of diamond jewelry inspired by flowers, called Fiorever. The first new collection since 2014, the name is a marriage of the Italian word for flower, fiore, and the English word forever.

The Fiorever collection features a four-petal flower design, a symbol of the Roman passion for life, rendered in diamonds. Each sculptural piece is centered on a diamond solitaire from 0.10 to 0.50 carats surrounded by upward tilting petals that create a sense of volume.

“We thought we could re-create a new contemporary flower with a Bulgari spirit,” said jewelry creative director Lucia Silvestri, who began working on the new design in 2016. “A new pillar has to be contemporary, timeless and recognizable. You have to see Bulgari in it. It’s not just the design of the flower. But when you touch the flower, you see the craftsmanship and the details and sophistication which make Bulgari jewels recognizable.”

Silvestri kept in mind a multifaceted woman when designing the collection. “For this collection, we thought about a woman that can be romantic and feminine, but also strong and independent.”

The 29-year-old actress known for her bold style, said she was “thrilled and flattered” when Bulgari asked her to represent the line. “The intensity of this collection is something I could relate to immediately. The flowers represent vitality, and it’s all about diamonds and the power that the diamond has, the characteristic of being indestructible and the most resistant stone. I can identify with that in my life. I know my personality is strong,” she says with a smile.

“Adding a new pillar of jewelry means broadening our appeal to additional clientele,” he added. Fiorever will range in price between $5,000 to $50,000, the same range as Serpenti, the last pillar collection introduced in 2014, which Babin said was “extremely successful.”

The launch comes just a week after strong third-quarter results reported by LVMH Moët Hennessy Louis Vuitton, led by Bulgari. “It’s true we have been successful in recent years. Jewelry remains and will remain for the years to come our major area of focus in terms of commitment of resources. The jewelry success drives and explains the subsequent watch and accessory category successes,” said Babin.

The company’s hotel business continues to grow as well. The launch of Fiorever, hosted at the company’s beachside hotel in Dubai, was aimed at giving guests a full immersive Bulgari lifestyle experience, said Babin. “We are lucky to have six houses of Bulgari around the world where we can bring our valued clients and offer a unique experience.” Three other hotels are planned to open: Paris, Moscow and Tokyo in the next four years. They are also targeting a move into North America. “That market matters a lot for us. But we are jewelers and just like for gems, we look for something exceptional with a certain purity, so we will wait to find the location that can become a real hospitality landmark.”