The party for the opening of the collaborative show was followed by Vogue China’s 11th anniversary bash. 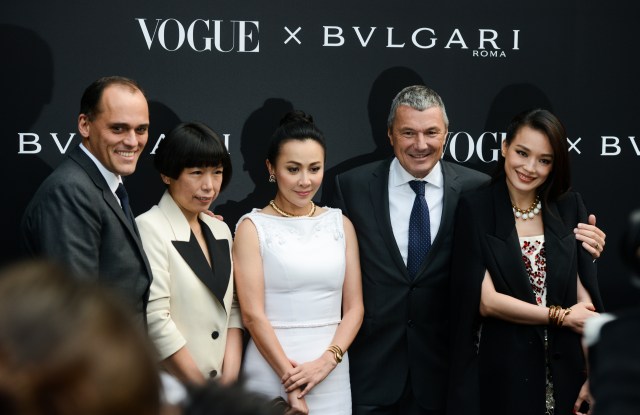 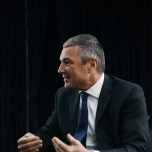 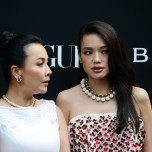 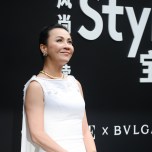 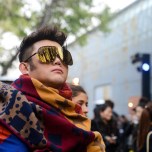 “This show points at a new creative step for Bulgari. We’ve shifted out of our comfort zone and into the contemporary in a way that’s trendsetting. It’s been stimulating for the brand as a whole,” he said.

The show in question, “Gem, Dream, Style,” is a retrospective of Bulgari’s jewelry at the Taiwanese-owned Soka Art Center in Beijing’s 798 art district. As for its innovative direction, Babin was referring to the fact that, for the first time in the firm’s history, Bulgari handed the curation of the project to a commercial partner — Vogue China.

“We thought it would be interesting to do a show not through our eyes, as we’ve always done, but through the eyes of someone else — in this case, the magazine that best understands and represents luxury globally,” said Babin.

Angelica Cheung, Vogue China’s editor in chief, was asked to cocurate the exhibit, offering her fashion perspective on vintage pieces from Bulgari’s heritage collection that were personally selected by the company’s brand and heritage curator Lucia Boscaini.

The resulting show spans multiple areas, including a stylized cavernous space evocative of a mine where giant, diamond-shaped neon lights hang from the ceiling and rare collector’s pieces shine through glass cases, and a room where a video collage portrays Vogue’s recurring use of Bulgari jewelry through the years. Throughout the show, editorial fashion images are juxtaposed with precious stones and diamonds. Bulgari’s archetypical Serpenti Tubogas from the Sixties sits next to Eighties Pop Art-inspired colliers, while sapphire chokers from the Twenties are presented near women’s watches from the Nineties.

“There was great affinity of intents and taste throughout the project conception,” said Boscaini. “Being interpreted by and through what’s essentially another brand was also a pleasure. It offered a way to reinvent and reassess our past in a modern and very current fashion. This isn’t your typical historically accurate jewelry showcase. It’s about what Bulgari’s identity is today — a brand aware of its history but very much projected towards the future and focused on the present.”

In an economic climate that’s seen the luxury market hit a major slump across Asia, Bulgari maintains its ambitions in the region. “The entire Asia-Pacific area continues to be an engine for growth,” said Babin.

China is one of the brand’s main targets. The LVMH Moët Hennessy Louis Vuitton-owned company has been investing more than ever in the country and, after a solid third-quarter performance for both its watches and jewelry division, which includes Bulgari, it has no intention of scaling back.

“China has had somewhat of a ‘double effect’ on our sales,” the ceo said. “It offers a huge domestic market — we currently have close to 30 boutiques in the country, opened one more this past year and are planning a new one for early 2017. At the same time, because Chinese high spenders travel so extensively, they have become an essential source of travel retail. That’s why we’re sitting here today — we are aware of how important this customer is, and want to provide him or her with an experience that goes beyond the simple purchase of an object.”

A cluster of younger, up-and-coming celebrities were also part of the proceedings, from singer and heartthrob Xu Weizhou to award-winning actress Shuying Jiang, former model-turned-actor Jinfu Jiang and TV personalities Gulnazar and Tong Liya. They catered to Bulgari’s ever-expanding Millennial clientele, for whom the brand has been creating products combining European and Chinese cues — just like the exhibition itself.

The celebrations for China’s fashion and entertainment elite continued late into the night with Vogue China’s 11th anniversary party, held at an undisclosed location by Beijing’s fourth ring road. The bash had a star-studded list of attendees, including about 40 models, actors, designers, celebrity stylists, singers and socialites who walked the pre-party red carpet. Fan Bingbing was there, as were models Ming Xi, Du Juan and Liu Wen and designers Masha Ma and Zhang Huishan.

Among this strikingly youthful cast of stars, Cheung praised Vogue’s success in China, but also took a moment to address the power of youth — no doubt a nod to the growing readership of the Millennial-targeted Vogue Me and the popularity of the Vogue Mini app. “I think young people can really set their minds and hearts to becoming influential. They consider their personal development, what they want to do; and they study endlessly. They have flair, with a potential of influence. Here at Vogue, we want to nurture that potential.”