The grandeur, exuberant details and ornamentation that characterized the artistic and architectural movement is reflected in Bulgari’s new colorful and joyful collection, a message of hope at this moment.

MILAN — Bulgari is weaving a bold, colorful and precious thread between the brand, the city of Rome and the Baroque style, which originated in the Italian capital in the 17th century.

The grandeur, exuberant details and ornamentation that characterized the artistic and architectural movement is reflected in Bulgari’s new haute joaillerie collection, called Barocko.

“Bulgari has always had a rebellious, rock spirit, a particular detail that upended the rules, and it’s never been a classic precious jewelry brand,” opined jewelry creative director Lucia SIlvestri, explaining the moniker of the latest collection.

The high jewelry collections are planned a year in advance, Silvestri said, recalling an early-morning walk through Rome last August, admiring the opulence of the sculptures by Gian Lorenzo Bernini and Francesco Borromini, some of the finest expressions of the Baroque style. “I felt so inspired,” Silvestri said.

In a serendipitous way, the marvel Silvestri felt at rediscovering Rome through that walk was replicated during Italy’s lockdown as the country dealt with the coronavirus pandemic. “I used to travel around the world every other month [in search of gems] but, grounded in Rome, I walked for miles admiring the beauties of the city, finding new corners. I had never seen the Fontana di Trevi with no tourists in sight; I could hear the sound of the water. It was magic, more special than usual and it’s true that when you have so much beauty at your doorstep you take it for granted and you think there’s always time to enjoy it,” she mused. “And especially at this moment, I am so happy to pay tribute to Rome and its beauty, it feels even more poignant.”

Telegraphing a message of hope, the Barocko collection is colorful, joyful and luminous, fulfilling the goal of the Baroque style — to induce awe.

Case in point: the Sapphire Lace necklace in platinum with an oval 28-carat Burma sapphire, a round brilliant-cut diamond, 22 round sapphires and 381 fancy shape step-cut diamonds and round brilliant-cut and pavé-set diamonds. The depth of the blue of the central sapphire even cuts through the video interview with WWD. “You see how warm and velvety it is?” marveled Silvestri, speaking from her studio in Rome.

Another stunner is the Cabochon Exuberance necklace inspired by the 16th-century Farnese Gardens on the Palatino hill, requiring up to 700 hours of craftsmanship. In yellow gold, it features three cabochon tanzanites, three cabochon tourmalines, one cabochon rubellite, four cabochon aquamarines, nine emerald beads and 120 fancy, step-cut diamonds, as well as 11 round brilliant cut diamonds and pavé-set diamonds. “Each single stone is of such beauty and size that they could each be set as a stand-alone pieces,” said Silvestri, pointing to the “Mai troppo [never too much]” bold approach of the brand. 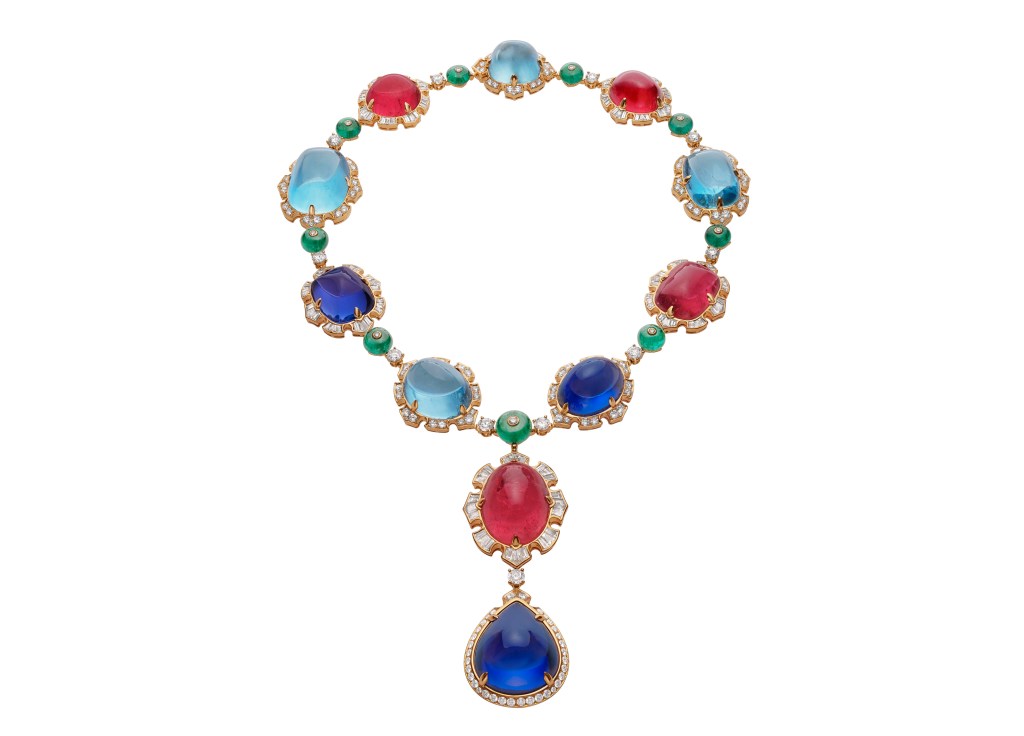 The Sapphire Bow flexible necklace in platinum with one central 14-carat oval Burma sapphire, seven pear diamonds, 43 round brilliant diamond drops and pavé-set diamonds is reminiscent of the lace and embroidered collars worn by women in the Baroque era, when feathers, bows and elaborated ornaments were the trend. Silvestri proudly showed the back of the necklace, equally beautiful and intricately crafted. 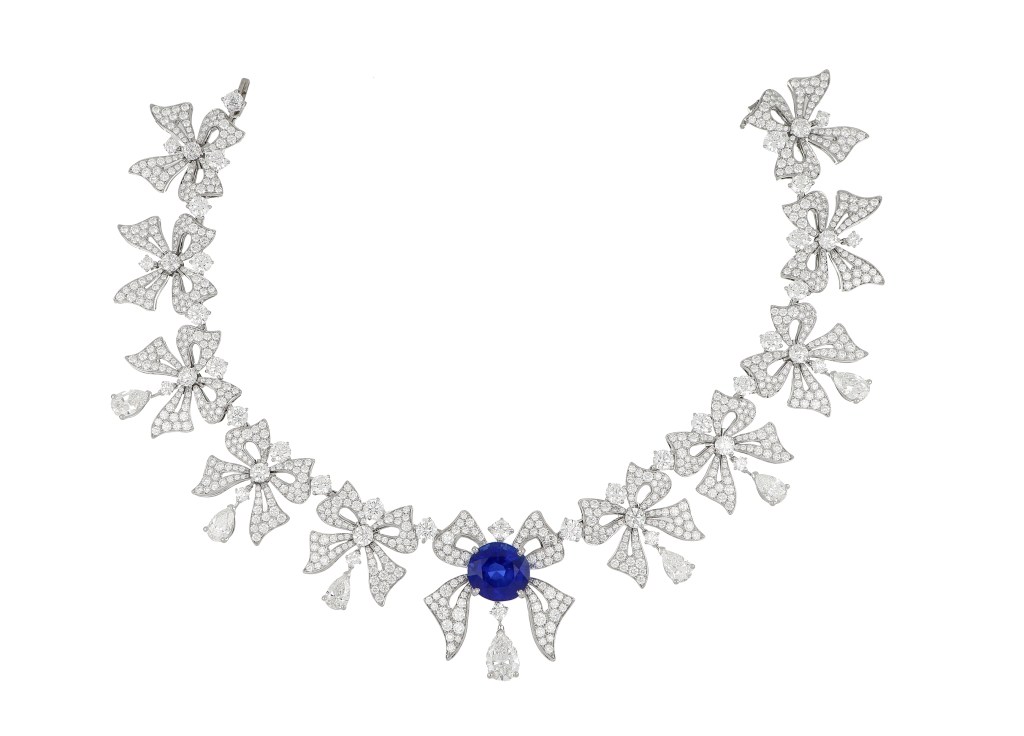 The Rocking Emerald white gold necklace is set with zircon elements, one pear 22-carat emerald from Zambia, one round brilliant-cut diamond, 15 pear 26-carat emeralds  and pavé-set diamonds. “Onyx details demystify the high jewelry concept and add a rock touch,” Silvestri said. These elements contribute to a versatility that Silvestri said has helped the brand reach out to generations across the board, worn by mothers and daughters alike, for a cocktail or evening event and not necessarily on formal occasions but, “just for the pleasure of it, because it makes you feel more beautiful.” 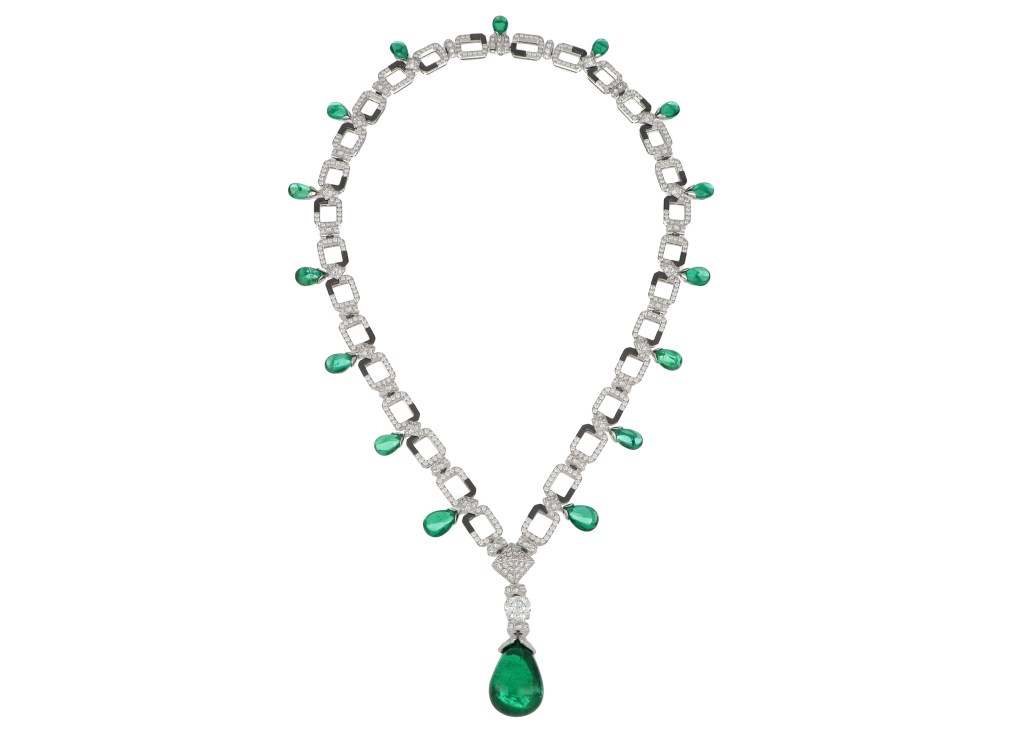 The “Serpenti Spell” diamond bracelet-ring is inspired by the dramatic flamboyancy of Bernini’s Fountain of the Four Rivers in Rome’s Piazza Navona, and is also reminiscent of henna tattoos of Indian women.

The “Rosso Caravaggio” necklace is one of the most complex pieces in the Barocko collection and required 1,500 hours to complete. It shows a rare 10-carat cushion ruby, sourced in Mozambique, mixed with sparkling diamonds and hides a sophisticated mechanism, which enables the owner to convert it into two detachable necklaces for multiple styling options.

Bulgari holds yearly swanky events to present its haute joaillerie collections, such as the Cinemagia, unveiled in Capri last June and inspired by the movies and the Dolce Vita actors vacationing on the Italian island.

The pandemic has scrapped plans for this summer, but Bulgari will hold an informal virtual presentation in mid-July, followed by a big event in Rome in October.