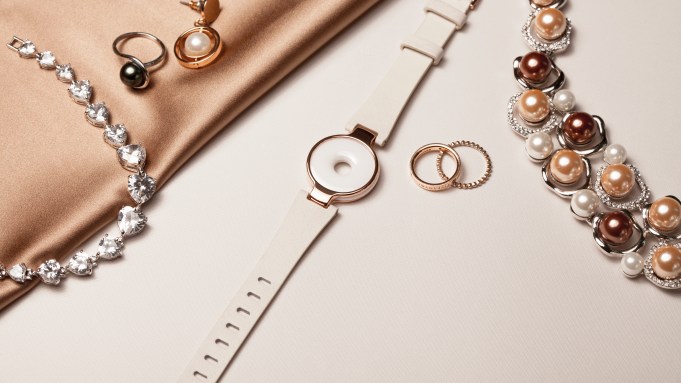 The options for design-minded wearables continue to expand.

Two new connected accessories, which are designed to be jewelry-inspired ways to track both mind and body performance, become available this week. Each offers a handful of designs, including a white with rose gold and a black option — ostensibly to offer a “his” and “hers” iteration.

Caeden’s Sona Connected Bracelet is a screenless tracker with a focus on meditation and stress relief. It connects to a smartphone app that, in addition to tracking heart rate and activity, also helps the wearer train in mental focus through a program called Resonance. It also vibrates to alert the wearer of calls and texts.

The design options are a white leather with rose gold, gunmetal with black leather or a gold with black leather. The Sona bracelet became available for pre-order in November and is available for $199. The two-year-old company has to date raised $1.6 million and started with a series of headphones. It counts among its eight-person team Soyoung Park, who previously served as a marketing executive at Donna Karan International.

On the other hand, so to speak, is the $79.99 Amazfit, which introduces a ceramic-based activity tracker in which the design is inspired by a traditional Chinese jade pendant. It tracks steps, distance, calories and sleep quality, and provides incoming call alerts with a vibration.

Its two styles are a white shell in a rose gold-plated metal frame with a white leather wristband, and a slimmer option with a minimalistic band in black or rose gold. It is available today on Amazon.com, and can be separately combined with other wristbands and a necklace.

Amazfit is owned by the two-year-old Huami, which provides wearable technology for Chinese electronics company Xiaomi and has raised $35 million.

Huami has sold more than 24 million activity trackers in China through its partnership with Xiaomi, according to Frederik Hermann, head of U.S. marketing and sales for Amazfit. And, as is one ongoing trend for many connected accessories, he emphasized the company’s health-centric calling. “We want to encourage people to make healthier decisions on small, everyday activities, such as taking the stairs instead of the elevator, that contribute to an overall healthy and active lifestyle,” Hermann said.

The market is increasingly saturated with plugged-in accessories that are designed like jewelry and aim to be a link between a user’s smartphone, in that they provide notifications and other alerts through vibrations or lights, and a fitness or health accessory.

In July, Misfit, which was bought by Fossil Group Inc. last year for $260 million, unveiled the latest in its line of accessories called the Misfit Ray. The Ray can be worn as a bracelet or necklace and offers sleep and activity tracking; text and call notifications; a wake-up alarm, and a customizable “smart button.”

Misfit general manager Preston Moxcey said he anticipated that eventually, most accessories would include a version of a digital, or “smart,” functionality, and that demand had been growing.

Fossil Group’s launch of 100 wearables products, including display and nondisplay watches and trackers, will be available in 40 countries and 20 languages by the holiday season.

Forrester researchers, in a report out this month, predicted that so-called “wearables” would reach critical-mass adoption by 2021. Forrester also said the market will grow from $4.2 billion last year to $9.8 billion by 2021, with Millennials leading the charge with a preference for devices that offer convenience and relevant information. Smartwatches are included in these numbers.

Forrester Data forecast that U.S. consumer adoption of wearable devices would reach 29 percent by then, compared to last year’s 18 percent. “Today, the vast majority of consumers who own and use wearables have a health or wellness device (17 percent), while monitoring, retail, notifications and travel garner much interest and are expected to grow,” the report stated.