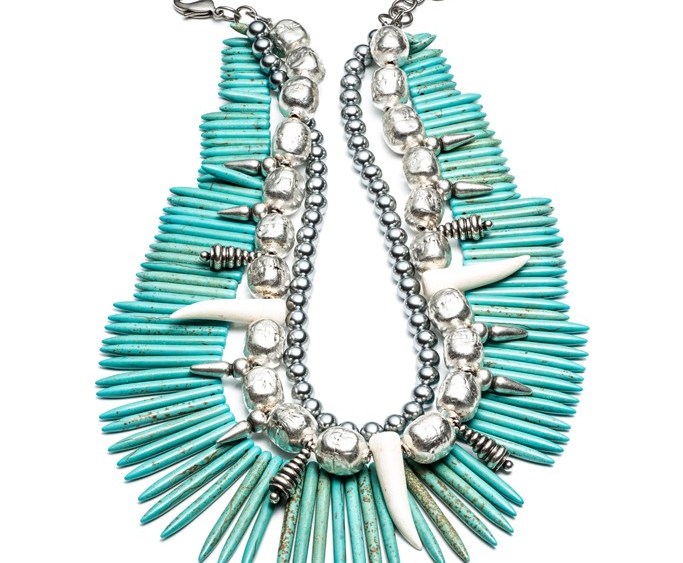 That’s the sentiment in the contemporary jewelry category right now, where designers are taking a cue from the ready-to-wear crowd and rapidly rolling out resort collections.

Observers point to several reasons for the added collections — from retail and consumer demand to the selections serving as a platform for experimentation, or even the ability to sell full-priced product during the holiday season. But one thing is clear: Resort is increasingly gaining momentum in the accessories market and brands need to think beyond designing just for fall and spring.

The designing sisters started to notice a real transition at retail last season, namely that buyers were asking designers to expand beyond their mainstay spring and fall collections.

“The marketplace is changing,” said Dannijo co-founder and creative director Danielle Snyder, at the four-year-old line’s redesigned showroom in the Meatpacking District here. “Traditionally, buyers bought a large quantity a few times a year, and now, we’re noticing that our retail partners want to buy more frequently throughout the year. It’s a logical next step.”

The 20-piece collection, carried at Bergdorf Goodman, Shopbop, Holt Renfrew, Lane Crawford and Luisa Via Roma, ranges from $200 to $800. The assortment’s standouts are the $240 Swarovski Elements and glass “Lola” bracelet and the “Fielding” necklace, a $645 piece made from oxidized silver and brass, antique beads, carved bone and a saturated Kelly green Swarovski crystal as a centerpiece.

Jennifer Fisher, who recently marked a year in contemporary jewelry (she started her fine jewelry collection in 2006) and had a global launch at Lane Crawford, just completed her first 12-piece resort collection.

“People are asking for it — and for filler collections, too. They don’t only want fall or spring, they want pre-fall too. It’s crazy,” Fisher said. “Stores want to see something fresh and they’re buying less from large-breadth collections and more from small groupings. It’s becoming like mini-capsule collections all year long.”

Fisher added that her consumers want to go into a store midseason and buy something new — a piece that hasn’t been sitting in the showcase for months.

The resort craze doesn’t stop there for Fisher, though. She’s in negotiations to collaborate on her premier “Beach” collection with a high-end international resort hotel chain.

Gemma Redux’s Rachel Dooley echoed those sentiments. She added a resort group because retail partners such as Tomorrowland in Japan and Saks Fifth Avenue started to ask for it.

Dooley’s five-year-old line is carried in about 50 doors worldwide, and she has unveiled about 40 pieces for her first resort collection. This is about half the size of her typical spring and fall assortments, which range from 80 to 100 pieces.

Designed to “fill the gaps” between spring and fall, Dooley is also using resort as an opportunity to test new motifs.

“We’re doing a lot more molded and solid metals, and this collection is more about that and less about layering. It’s transitioning from mixed-media pieces made from chains, stones and metal to more streamlined silhouettes that focus on one or two big elements,” Dooley said, describing a simple gold collar and cuff, both retailing for $550, adorned with an oversize brass agate slice casting — a prime example of her “new aesthetic.”

Dana Lorenz of Fenton and Fallon just presented her second resort collection for Fallon, comprising 25 styles that will be carried at Barneys New York, Intermix and Shopbop. It will retail from $100 for a simple chain or spike ring to $375 for a more elaborate piece fashioned from biker chains, micro spikes and Swarovski crystals.

The uptick in resort has become the perfect vehicle for Lorenz to experiment while still reinforcing the brand’s signature chain and spike elements, she added. Last year’s introduction of rose gold and shark chains gave way to “a whole rigid geometric theme” for the most recent offerings. Lorenz developed custom plates to solder behind the chains to create a less fluid, geometric pathway for bracelets, necklaces or earrings — a departure from her frequent use of fluid, entangled chains.

Eddie Borgo, who began doing resort in 2011 as a result of high sell-throughs and requests from retail partners, calls it the most challenging collection he produces. Always in pursuit of “wowing” his consumer, he approaches the design process as a more directional, “experimental” season. Resort is his time to try new processes or infuse unique materials or colors in a way not typically represented in the seasonal fashion collections he produces for fall and spring. Last year, he worked with turquoise (in blue and yellow) for the first time, and this year he employed a plating technique called ionic plating to create prismatic, plated brass pieces in iridescent pinks and blues.

“For us, resort immediately meant another delivery that was as substantial, monetarily, as each of our other deliveries,” Borgo said. His brand is sold at more than 100 doors globally, including Bergdorf’s and Neiman Marcus, and exclusively online at Net-a-Porter.

Borgo said this season’s resort selection has already been quite lucrative for the three-year-old company — it’s grown 50 percent since last year’s collection.

The addition of resort lines is not an entirely new phenomenon in jewelry quarters. Brands including Kara Ross, Alexis Bittar or Erickson Beamon have been incorporating resort collections into their lineups for several years or even decades.

Kara Ross has produced one for three of the four years since launching her contemporary jewelry collection Kara by Kara Ross, rife with real gemstones and vibrant-colored exotic skins that retail from $200 to $500. “It’s an important market, and I think it’s because from the beginning, we have thought of designing it like fine jewelry, taking a lot of care with the quality as well as the look of the pieces,” Ross said. “We don’t call it ‘costume’ jewelry, but call it our ‘Boutique’ line. We have to pay attention to the quality, whether we’re making a $20,000 piece or a $200 piece.”

Alexis Bittar has been presenting resort for nearly 10 of the 20-plus years since founding his namesake line, now carried in more than 600 doors in the U.S. and worldwide and at his seven freestanding domestic boutiques.

He contends that department stores’ need for fresh merchandise to sell in conjunction with “on-sale” product during the holiday season is integral to the growth of this category.

For him, it’s important have a full-price retail presence during sale season because besides holiday shopping, consumers are shopping for the future, not just for the present.

The 80-piece collection is slated to hit stores in November and December, and is generally more sporty than Bittar’s usual fall and spring collections. He said he designs in an “almost pre-spring transitional approach,” knowing that his Lucite, metal, semiprecious stone and Swarovski crystal jewelry will stay on the floor throughout the spring.

For Erickson Beamon, there has been a resort selection available in some shape or form since the brand’s inception in the early Eighties. The 16-piece collection that will hit stores such as Ikram in mid-September starts at $355 for a single rose ring to an elaborate “I Never Promised You a Rose Garden” necklace made of Lucite flowers, semiprecious stones, Swarovski crystals and carved quartz in fuchsia, teal, lime green, coral, yellow, rich purple, rose pink, forest green and gold. It retails for around $1,730, with the most expensive piece in the assortment at $3,055.