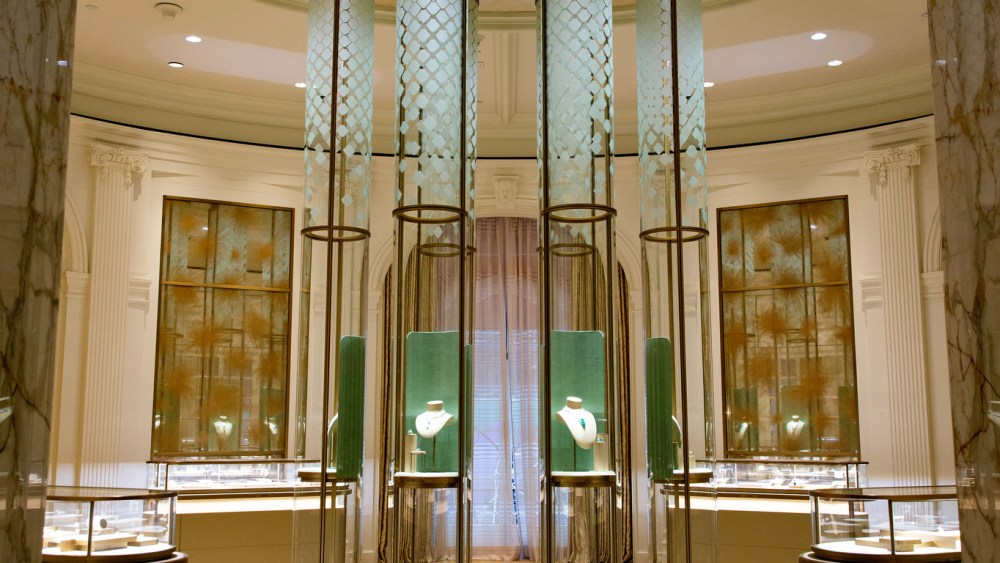 Dating back to the Gilded Age, the 28,772-square-foot, Neo-Renaissance landmarked building has been Cartier’s home in Manhattan for over a century. It was last renovated in 2016, including structural improvements, and a total modernization of the mansion, Mercedes Abramo, president and chief executive officer of Cartier North America, explained in an interview.

The recent enhancements come at a time when luxury brands are rethinking the role of the modern boutique. Cartier’s direction was “a reflection of substantive client feedback along with the jeweler’s  vision for the future of the maison,” Abramo said.

“The project was certainly about modernizing it from a visual and technological perspective, but it was also about challenging traditional notions of the retail space and creating an environment that’s both welcoming and luxurious, both practical and inspiring,” she added.

It of course serves as sales floor, but the CEO pointed out the motivation was to “firmly position the mansion as a cultural destination — more than just a transactional space — in the greater New York City landscape.”

The balance of heritage and innovation is seen throughout the boutique. “Despite turning 175 this year, Cartier is a very modern maison,” Abramo said, adding there was a threefold approach with the renovation, focusing on design, innovation and hospitality.

The jeweler tasked Paris-based interior designer Laura Gonzalez with writing the New York mansion’s next chapter. Gonzalez has put her stamp on a mix of prestigious projects globally, and has worked with Cartier on several in the past.

“It’s an iconic address of the maison, filled with history and anecdotes,” Gonzalez said of the Fifth Avenue location. “Our ambition was to breathe back life, a new dynamic, while respecting its past and preserving its soul, which you can still feel very well.”

The client’s journey begins on the ground floor, where windows were opened up to “bring more of the city’s energy into the space,” Abramo said, a first step in deepening  the dialogue between the mansion and Manhattan.

Gonzalez echoed: “Luminosity and the clarity in the project have always been very important to Cartier. We want to bring the light from the outside to the inside, give a sense of transparence in the space.“

Historically legacy houses, especially high jewelry stores, have “always been closed spaces where people could not see what was going on inside, so I truly believe that we are facing new luxury codes where there’s a light opening from the inside to the outside and the other way round,” she explained of their new approach to the boutique.

“With the ground floor inclusive of our full feminine, masculine and unisex offerings — particularly our icons — this is a way of anchoring our brand identity from the moment our guests enter the space,“ the CEO said.

Gonzalez linked the organic parts of the city — its parks — by introducing lush green hues into the space, seen in the furnishings throughout and the carpeting that ascends the grand staircase. “I simply think that green represents vegetation, nature,” she explained. “Fifth Avenue is very close to Central Park, and I needed to include all these elements in the project to create an oasis, a peaceful beacon in between classicism and the building’s history.”

Nature is also highlighted in the VIP salon spaces. “When you live in a city, you have a very different perception of the seasons and how they evolve than if you lived in the countryside,” Gonzalez said. “The trees and all of life react differently. The lights during Christmastime, the outside spaces during summer, all change constantly in an urban way rather than natural like outside the city.”

The salons use the four seasons and Cartier jewels as inspiration — the fish in summer, the cherry blossom for spring. “I thought it was quite poetic to have the petit salon with a wink to the seasons,” Gonzalez said of her whimsical touches, which she mixed with classic fabrics, chromes, and lacquered panels created in the workshop of Anne Midavaine, a Paris-based lacquerer.

The second floor, known as the Grace Kelly Salon, houses the hidden world of high jewelry. Kelly is still a presence — the seal of Monaco can be seen on the walls, and pictures of her can be found in viewing salons — but now updated through Gonzalez’ lens. “We wanted to pay tribute to Grace Kelly’s beauty and femininity but also to take it elsewhere, express the French Riviera, the sea, this art de vivre we can find in the South of France,” she explained of the subtle sea life details.

Emblematic of the brand, the Panther is seen in various salons throughout the mansion, on the second floor it’s found in a striking piece in stone marquetry by artist Hervé Obligi.

Here innovations in technology — developed by Cartier’s Retail Innovation Lab in Brooklyn — take shape with their Digital Showcases; one on the fourth floor and one on the second. They feature 16 browsable high jewelry creations that clients can view from all angles, as if they were seeing the creation in person. Essentially hologram technology inspired by a visual technique called Pepper’s Ghost, which was popularized in 19th-century theater and cinema, it gives a way for visitors “to see and interact with one-of-a-kind high jewelry pieces that are not physically present in any particular boutique,” the CEO said.

The third floor is dedicated to love, “in its many permutations,” Abramo said, with the addition of the Engagement Salon and Wedding Bar. The third-floor landing provides several avenues for personalization and customization by way of innovation. The Set For You landing houses an interactive counter with educational content on Cartier’s diamond standards as well as providing clients with an innovative and interactive way to experience the diamond selection process. ”I see it as a way of using technology for good,” the CEO said. “It establishes a very intimate way for clients to select their perfect stone and setting in a very high-tech format.”

The area includes AR interactive frames with touchscreens that allow guests to connect physical artifacts and stationary samples digitally. Stationary creations come to life through a poetic animation and videos uncovering the savoir faire of design and the creation process.

Gonzalez noted that they didn’t want something only feminine for the wedding dedicated floor because the space also addresses men. “It’s open to everyone. This is why we wanted to create this atmosphere with pearly sheen, silver, white gold, and soft colors, while introducing a humorous touch with the incredible Cartier animals brooches, such as the owl, the poodle, the duck.” Each is depicted in a hand-painted screen by artist François Mascarello, “aiming to give it a young and fresh atmosphere.”

The animals are a nod to the fanciful side of Cartier, something Gonzalez said was important “to create a sense of casualness, humor and fun. So, we wanted to reflect Cartier’s creativity through the crocodiles, the ounce, or even the poodle on the screen wandering in Central Park, to give an idea of refreshing space.”

Bold art works throughout the space underscore the boutique’s continued conversation with the city and its history. For example, guests entering on 52nd Street are greeted with a striking large-scale ceramic wall sculpture in a white matte finish with golden touches by New York artist Peter Lane, inspired by the now legendary story of how Cartier came to own the landmarked building.

In 1912, Pierre Cartier — the grandson of Cartier’s founder — started searching for a flagship location in New York City. He searched for five years for a location that was on par with the brand’s Paris flagship on rue de la Paix. Legend has it that when the mansion became available, Pierre Cartier knew he had found the ideal place. In 1917, he proposed a trade with its owner, businessman Morton F. Plant. In exchange for the mansion, Pierre traded $100 and a Cartier necklace which Plant’s wife Maisie had fallen in love with, comprised of 128 graduated, perfect double-strands of natural pearls that took years to assemble.

A portrait of Maisie Plant in her pearls now resides on the store’s second floor — relocated from the ground floor — serving as a reminder of Cartier’s origin story in New York.

Finally, the fourth floor is dedicated to hospitality and service, with a space that includes a coffee and bar, salons for care consultations, and hidden away spaces for in-store events. The transformation began on the fourth floor, updating sections of the space while still maintaining a working boutique.

While the masion preferred to quietly debut, forgoing any large events, there are exclusive creations that mark the remodeling: a Tank Asymétrique; a Juste un Clou — the signature design by New York City-based Aldo Cipullo, and four stationery designs.

“I think our treatment of the mansion is very similar to our overall approach as a maison — it’s a balance of remaining true to our heritage while embracing innovation,” Abramo said.