The jeweler celebrated the launch of its new, high jewelry collection with a gala dinner at Shoreditch Town Hall.

LONDON — There was many an unusual sight in East London as chauffeured cars, well-heeled guests and Cartier bellboys lined up outside Shoreditch Town Hall for a gala dinner on Wednesday night.

The occasion was the launch of Cartier’s “Magnitude” high jewelry collection and to mark the occasion, the jeweler gathered the likes of Lily Collins James, Claire Foy, Letitia Wright, Peter Dundas, Bianca Brandolini and Iris Law, adding a dose of elegance to the hip end of town.

In the spirit of the new collection, the idea was to offer a “magnitude of pleasure,” said the house’s chief executive officer Cyrille Vigneron, who plotted a number of surprises for guests, including a performance by Beth Ditto who sang Aretha Franklin’s “A Natural Woman” and had guests up on their feet cheering.

Collins James led the way to the dance floor, while a host of influencers including Susie Lau, Karen Wazen and Doina Ciobanu — who have recently appeared in digital campaigns promoting Cartier’s new “Guirlande” bag and “Clash” jewelry range — followed her lead, iPhones in tow to document the experience.

Post-performance, Ditto received a phone call from the buzzy DJ Mimi Xu. The phone was presented on a silver platter by a bellboy and broadcast across the grand ballroom. She invited the singer and the rest of the crowd to the basement to continue the party — which went on until the wee hours, in true Cartier spirit. 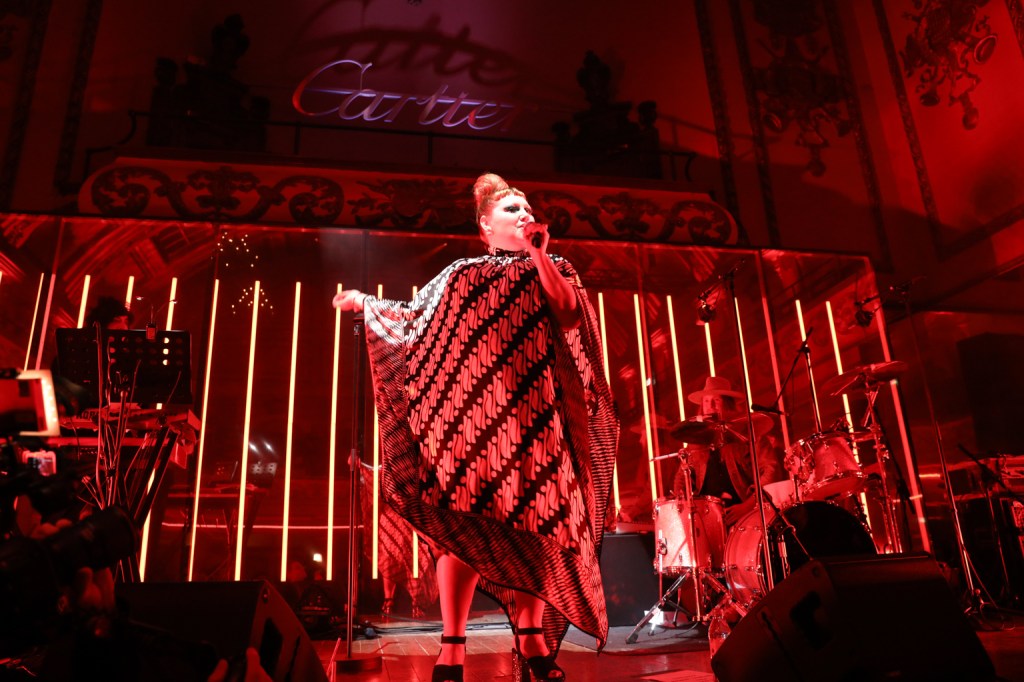 “We’re not ones for convention. Tonight’s event, where we brought high jewelry to Shoreditch, is a good reflection of our spirit,” said Arnaud Carrez, marketing communication and clients services director at Cartier International.

The gala was only part of the “Magnitude” celebrations.

Earlier in the day, the company opened the doors to a “Magnitude” exhibition at 180 The Strand — the venue has also been used as the official London Fashion Week show space — showcasing more than 500 pieces, both from new, past and archival collections.

The collection aims to highlight Cartier’s flair for experimental design through the years, and particularly for mixing precious and ornamental stones that were never meant to meet, according to the brand.

Among the standout pieces created for this new range was a striking necklace dubbed “Equinoxe” that mixed lapis lazuli stones with sapphires and diamonds; a cuff featuring a rare matrix opal from Australia highlighted with an array of diamonds and blue and purple sapphires; or a crocodile-shaped necklace set with Colombian emeralds that Monica Bellucci debuted during this year’s Cannes Film Festival. 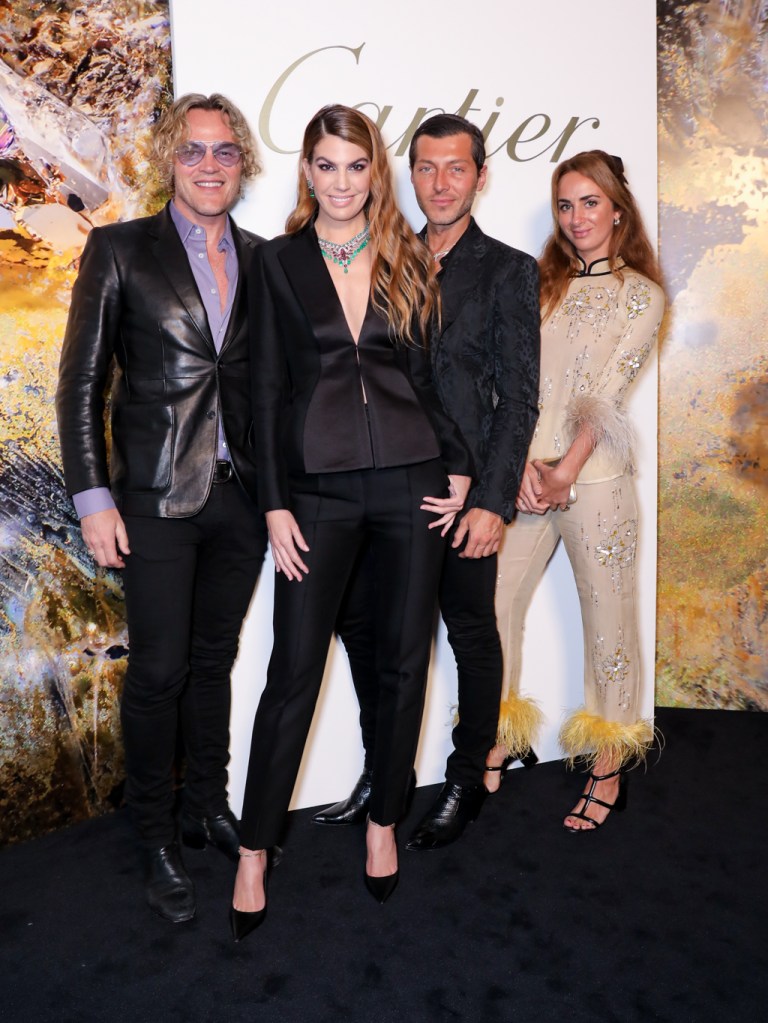 The new pieces were complemented with designs from previous collections that embody the same spirit of mixing stones, as in a “Panthère” necklace combining diamonds with crystal rock.

“We used platinum for the first time at the beginning of the 20th century and have always embraced crystal work, which isn’t typically used by other jewelers. We have also been using semiprecious stones, which shows that we have always had a strong relationship with all types of gems, and this collection is the climax,” said Carrez, pointing to the importance of revisiting pieces from past collections alongside novelties.

“High jewelry has a different timeline and different pace. Our aim is to create permanence and objects that are eternal. Novelty does not mean a lot in this case, the novelty is in the setting, with pieces from the past and contemporary ones all echoing one another. It would be very difficult for someone to point out which era each comes from and that’s what has been resonating with our customer base, establishing us as a leader in high jewelry.”

The house has already had success reinventing its icons with the recent relaunch of the “Panthère” watch being an instant sell-out when it made its debut online on Net-a-porter.

“We went against the tendency of the watch industry that was constantly launching new novelties. We presented the ‘Panthère’ at the Salon International de la Haute Horlogerie Genève in 2017, and people were asking a lot of questions but we were fine with that. The watch relaunched in the same design as the historic one, with the only difference being that the new one was waterproof and it gained momentum because the communications campaign felt contemporary and engaging and it spoke to a whole new generation,” added Carrez. 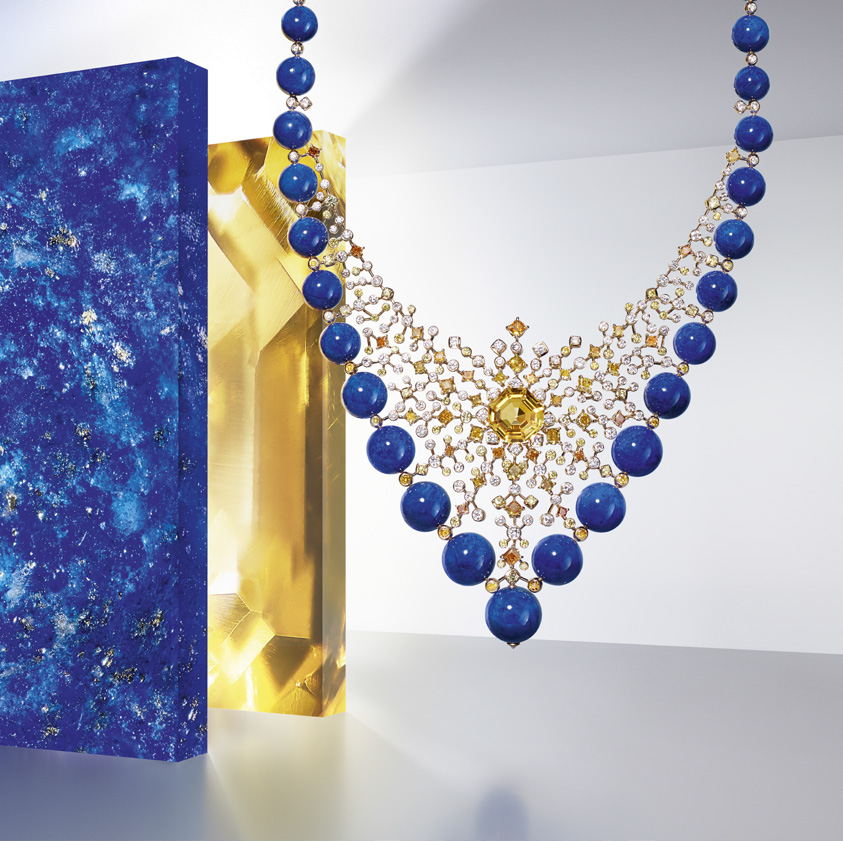 The “Magnitude” showcase will be open to private clients to shop from for the next three weeks, before becoming open to the public.

“It’s an opportunity to discover the brand because usually high jewelry is a world of its own. Very few people get a chance to experience high jewelry; you are not usually invited to events unless you are a client. For us, being exclusive on one side but having the spirit of sharing is very important, and this exhibition is an example of this mind-set,” said Carrez, adding that the house is also hosting an exhibition at the Forbidden City in Beijing, which has already received over 100,000 visitors in a week — and Tokyo is up next.

Making a strong statement in London was also high priority for the house, having just reopened its Bond Street boutique and planning to revamp and reopen its additional space on Old Bond Street down the road, later this year.

The private events suite in the new store has already provided myriads of opportunities to engage clients, and this month it will also add another layer to the “Magnitude” experience with an exhibition of its archives and special artist projects taking place in-store alongside the new collection showcase.

Archivists are set to take clients through special documents and vintage pieces that “tell the story of Cartier in London,” from the house’s first Royal Warrant, to sketches of unique items like a “Tutti Frutti” bandeau acquired by Edwina Mountbatten and sales ledgers that showcase the pieces being sold in the British capital as far back as the 18th century or Jacques Cartier’s expenses during his trips here, which included dog biscuits and opera tickets.

Among the vintage pieces on display is a larger-than-life, snake-shaped necklace and crocodile brooches created for María Félix; ruby and diamond necklaces worn by Elizabeth Taylor in the early Fifties, a palm tree-shaped brooch commissioned by the Maharaja of Patiala and Twenties Art Deco pieces inspired by Egypt. 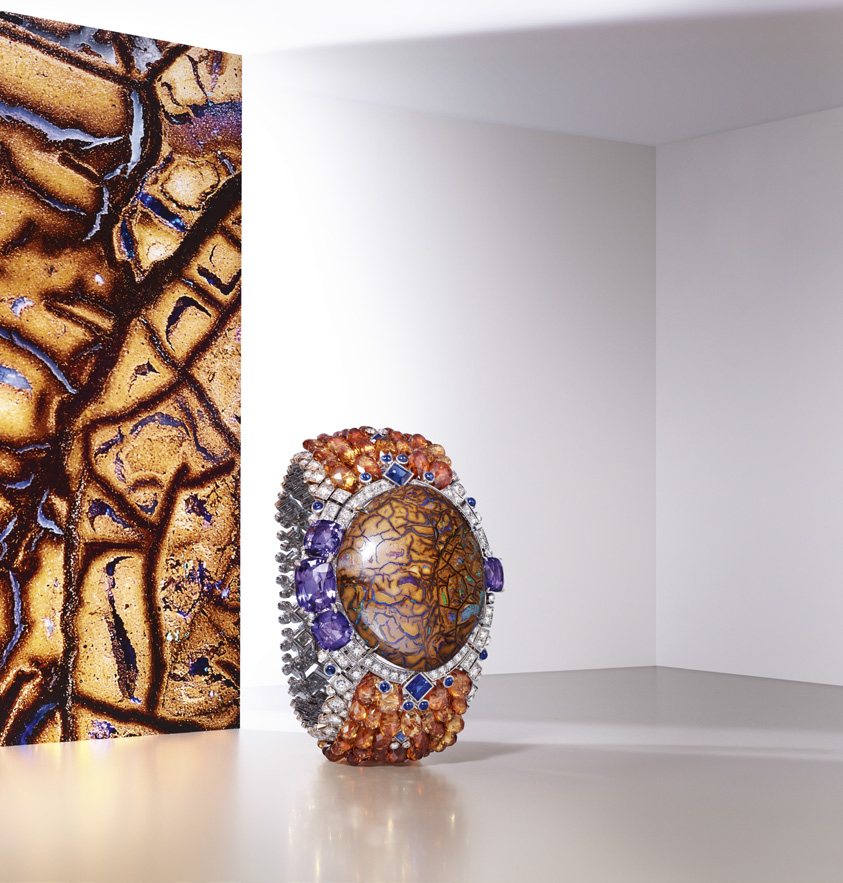 The Cartier “Zemia” cuff from the Magnitude range.  Courtesy Photo