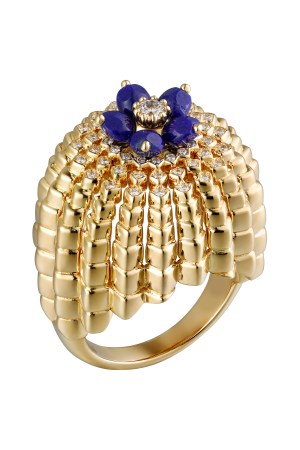 Lightbox Sets Up Shop in Montauk

PARIS — As Paris reels from its rainiest spring in 150 years, Cartier has come up with collection that evokes sunnier climes.

The Cactus de Cartier line draws inspiration from the jeweler’s tradition of interpreting flowers but gives it a bold new spin, with sculptural interpretations of desert blooms.

“We wanted it to be something very joyous, very luminous,” said Pierre Rainero, director of image, style and heritage at Cartier. “This is reflected in our choice of color for the gold, but also for the corresponding stones, which we wanted to be very stimulating —carnelians, chrysoprases, emeralds and lapis lazuli.”

While the use of yellow gold and chunkier volumes harks back to the style of the Eighties, Rainero said there were no vintage influences at work. “There was no intention of revisiting any specific period. Rather, the idea was to play on the characteristics of warmth, joie de vivre and the treatment of volume,” he said.

Consisting of 13 pieces in total, the line is priced from $15,000 for a ring made from a delicate sphere of gold beads topped with six brilliant-cut diamonds to $342,000 for a necklace made from four rows of yellow gold pearls studded with emerald beads and 204 brilliant-cut diamonds set into tiny swivelling flowers. It also includes a ring designed to be worn between the fingers, the first of its kind in Cartier’s history.

The brand celebrated the launch with a cocktail party on Saturday night at the Palais de Tokyo, where guests including Rossy de Palma, Bianca Brandolini d’Adda and Alexis Mabille viewed the pieces displayed in mirrored boxes surrounded by fake orange sand dunes. It was followed by a dinner at the venue’s Monsieur Bleu restaurant concocted by Michelin-starred Portuguese chef José Avillez.

The collection is scheduled to go on sale in select Cartier boutiques at the beginning of September. A dedicated advertising campaign will break in the October issues of leading magazines.

Rainero said the line would likely be complemented by one-of-a-kind pieces in the future, adding that he hopes it will become a pillar of Cartier’s offering. “We would like that, because the choice of the cactus flower suits us on different levels. It is not the most common flower in jewelry,” he noted.

“The plant is spiky to ward off natural aggressors and the flower is truly a sort of miracle of softness and fragility, as well as color, in this green landscape. So there is the idea of a declaration of joy in a fairly severe environment.”