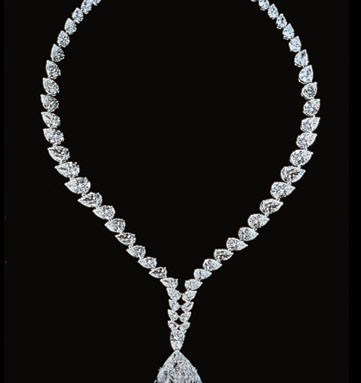 Cartier sells one things and one thing alone: passion.

From the house’s iconic Love bracelets, which are meant to signify a lasting bond between two people, to its Trinity rings, which represent the emotional triumvirate of love, friendship and fidelity, the watch and jewelry house remains a haven for romantics.

Acting as a veritable Eros for the brand is Frédéric de Narp, president and chief executive of Cartier North America. A dashing 40-year-old native of Brittany, France, de Narp’s mission is to show Americans just how to display their love through objects—always encapsulated in a little red box, the Cartier signature.

“When you want to celebrate a meaningful relationship…the red box is an assurance, a kind of comfort zone,” says de Narp. “The power of the brand is that this has never been compromised.”

De Narp arrived at his current position in 2005, after a stint as ceo of Cartier in Italy. He joined the company in 1991, as a sales associate in Japan. Upon arriving in New York, de Narp spent his fi rst days traveling the country, trying to absorb the nuances of the American consumer and to gauge their expectations of the French watch and jewelry house.

In December 2005, after his tour, de Narp told WWD that “Cartier is the king of jewelers in Europe and Asia, but our image, while good, can be bigger in the U.S. American women are very independent, and they have tremendous buying power, and our role at Cartier is to share with them how much fun they have with a wardrobe of jewelry.”

While the Compagnie Financière Richemont-owned firm has stores across the country, including significant emporiums in Beverly Hills, San Francisco and Las Vegas, the heart of the American operation is the Cartier mansion on Fifth Avenue at 52nd Street in Manhattan, which has been dubbed by the city as Place de Cartier.

The banker Morton F. Plant traded the Belle Epoque building in 1917 for $100 in cash and a double strand of pearls valued at $1 million at the time, since his wife, Maisie, had fallen in love with the extraordinary pearl necklace. However, the company opened its first store in the U.S. in 1909, upstairs at 712 Fifth Avenue, where Henri Bendel now operates. The New York Times heralded the arrival of Cartier, printing that Pierre Cartier was the first French jeweler to come to conduct business in New York.

“It’s a real love story for jewelry,” says de Narp of the exchange of pearls for jewelry palace, which Cartier sales representatives in the store often share as folklore. “It’s a responsibility to be in this building.”

In his time at Cartier North America, de Narp has focused on growing and advancing the brand, positioning it for the future.

The firm began rolling out additional stores and renovating and enlarging its units by 30 to 40 percent in a concept realized by architect Bruno Moinard. Shops in locales such as Beverly Hills; Chicago; Atlanta; Phoenix; Boca Raton and Palm Beach, Fla., and Topanga, Calif., and several others were renovated or opened in Moinard’s design, which features blond oak, black marble and textured bronze details, and display cases that can be approached from 360 degrees.

Notable expansions include the 2,500-squarefoot store in Dallas’ NorthPark Center in 2007, which was doubled in size, as well as the brand’s two-story, 6,500-square-foot San Francisco flagship on Post Street, which also doubled in 2007. The brand now has 36 stores in the U.S.

“My goal was to enhance the retail network and to communicate better,” says de Narp, looking back on his to-do list. “That’s essential, because we sell emotion.”

Within the retail network, de Narp has focused on bolstering the firm’s accessories business and opening bridal and watch salons, supplying them with staffs that are experts in the respective categories.

“[We worked at] making the experience at Cartier, different, warmer,” de Narp says, harking back to his time spent as a sales associate and what he learned on the selling floor. “People know and study the brands. We need to have experts help them find the right thing.”

Bridal has been a source of growth for the house. Cartier has a vast selection of engagement ring styles and a wide price range. There is also bridal-related jewelry, such as pearl and diamond suites and wedding bands.

The watch salons offer a full range of Cartier watches, including the five pillars: the Tank, Santos, Pasha, Roadster and the newest of the pillar watches, the Ballon Bleu. The company also offers an array of limited edition jewelry watches and rare watches with extraordinary movements and complications, such as tourbillions.

Cartier has some serious watch collectors. According to de Narp, one of the company’s major Italian clients employs a full-time expert to wind his  collection of over 500 Cartier watches.

De Narp and his team at Cartier North America homed in on the growing American interest in watch collecting, especially at the high end.

High jewelry has also been a significant growth sector in the U.S. Several high jewelry collections and important pieces, including the Caresse d’Orchidees par Cartier collection, made their debuts in America.

Cartier has also made an effort to support the arts and humanities in the U.S., by becoming a sponsor of Art Basel Miami Beach, the international art fair. Jean Nouvel, the architect who designed the Cartier Foundation in Paris created the 4,000-square-foot Cartier Pavilion dome for the art fair.  The brand has also supported art exhibits including 2007’s “Monument to Smile,” the photo collage by contemporary artist Agnes Winter in which she photographed 400 smiling faces on the streets of New York. The images were projected onto the facade of 30 Rockefeller Center in Manhattan. Last year, Cartier called on David Lynch, director of such films as Eraserhead and Blue Velvet, to design a space and installation, which was dubbed “Diamonds, Gold and Dreams.”

De Narp helped spearhead charitable efforts in the U.S. as well, through the brand’s Love Charity campaign. Each spring since 2006, the brand taps several celebrity ambassadors to represent a charity and then creates a Love Charity bracelet with a gold fob that corresponds to the particular cause. Celebrities such as Salma Hayek, Rihanna, Elie Weisel and Tim McGraw have participated in the event.

While Cartier has had numerous famous (and royal) clients throughout its history, it is the house’s practice to protect their privacy and details of their purchases. Among the more public celebrity collectors have been Elsie de Wolf, Ali McGraw, Steve McQueen, Angelina Jolie, Demi Moore, Jennifer Garner and Dame Elizabeth Taylor, to whom Richard Burton gave a 69.4-carat pear-cut diamond, which was dubbed the Burton-Taylor. Taylor was on the host committee for Cartier’s grand fete to celebrate its American centennial in New York in April, which also drew the likes of Martha Stewart, Elton John, Kate Hudson, Patti Smith, Eva Mendes, Justin Timberlake, Jessica Biel, Ashley Olsen, Anne Hathaway and a slew of other stars. (Click to see a video of Cartier’s centennial party.

Many celebrities also have worn Cartier jewelry on the red carpet, including Cameron Diaz, Renée Zellweger, Gwen Stefani and Hathaway, who donned diamond jewelry from the house this year when she was nominated for the Academy Award for Best Actress.

Star power aside, says de Narp, once the quality and design is top-notch, it comes down to emotion. “We use our power to enhance and celebrate passion and love.”