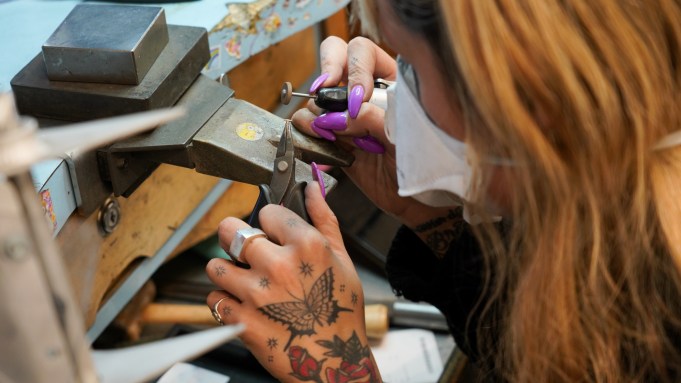 In the blush-tone hallways of Catbird’s Brooklyn Navy Yard headquarters, rules of the oft-stuffy fine jewelry world have been decidedly Brooklynized. Elvis Costello plays throughout an office accented by vintage light fixtures and hanging planters where employees design, manufacture and ship the company’s delicate fine jewelry to locations around the world. Jewelers’ dogs keep them company as they solder, some taking breaks beside the company’s keg of cold brew as others videoconference from the comfort of sorbet-toned velvet furniture.

It’s for this laid-back vibe that Catbird — which began in 2004 as a multibrand jewelry boutique at the dawn of Brooklyn’s hipster renaissance — has gone on to become a multimillion-dollar business turned to by style-conscious Millennials to mark important occasions in life. Run by founder Rony Vardi and co-creative director, Leigh Plessner, Catbird has seamlessly ingratiated itself with a generation best known for its cynicism and distaste for tradition, even cutting through their particular aversion for diamonds.

The company’s in-house line of delicate jewelry has grown to represent a majority of sales. It is mostly produced of recycled gold and diamonds and is crafted by hands that are employed under ethical standards — with jewelers offered full heath insurance, 401(k), stipends for continuing education and free childcare to attend after-work events. Most of the brand’s jewelry retails with a direct-to-consumer model for under $300. Its most popular style, the half-millimeter wide Threadbare gold band is priced at $44; the company has sold some 20,000 of them, including one to Meghan Markle.

To lend a unique appeal, teensy pearl and diamond studs, dime-sized pendants and delicate chain anklets are each given endearing monikers like “The Dollhouse Locket” and “The Tiny Dancer Stud Earring.” Each name is purposeful, used throughout the brand’s marketing to “give you a glimpse into something beyond the jewelry just being an object, but something with a whole world and a whole story,” Plessner said.

While the company attributes 60 percent of sales to its online channels, it maintains the inviting aura of a small boutique business. Until last month, Catbird’s only storefront was a 225-square-foot space on Bedford Avenue. A 1,700-square-foot SoHo boutique opened in early November and is filled with holiday trinkets — as it will take the Catbird studio six months to build up enough surpluses to fully stock its latest outpost.

But 15 years ago, this was all an inconceivable thought. Vardi, a former graphic designer, opened the first Catbird on Metropolitan Avenue in Williamsburg at the age of 34. Her original objective was simple — a neighborhood jewel box of a boutique, or as she deadpanned “just a place to buy nice things.”

“When I opened, it was pretty scrappy,” she said. “I had an aesthetic vision, but it wasn’t very cohesive. I had clothes [that] I had no business trafficking in. I had art supplies because there were a lot of artists in the neighborhood, rosewater toner, candles and jewelry right from the start.”

The latter category quickly became a focus for the business out of pure practicality. “It was a tiny store and jewelry doesn’t take up a lot of space,” Vardi said. She stocked local jewelry artisans making “small, easy and delightful” pieces that a woman might buy as a treat to herself — trading in the concept of self-purchase before it became a key business strategy for the larger jewelry industry.

Plessner, a stationery designer who sold her label at Vardi’s original store, began working part-time at the boutique in 2006 as a way “to get out of the house and create more discipline for myself,” she conceded.

The boutique’s slant on Brooklyn quirk — with its authentic, empowered femininity — began to take hold in the neighborhood. Vardi’s vision for trinket-type fine jewelry — a tiny seahorse pendant here, an alphabet stud earring there — was initially produced at a friend’s jewelry bench, situated in the kitchen of their Brooklyn apartment.

Soon, demand outstripped supply and Vardi began expanding Catbird’s operations — setting up a small jewelry in the store’s basement, then in the apartment overhead and later growing to two offsite spaces close by in Williamsburg.

Catbird’s first major hit came around 2008 when Vardi decided to produce “first knuckle rings,” or tiny gold rings to be worn high on the finger, just below one’s first knuckle. The style was modeled after a toe ring that Vardi bought on St. Marks Place that she’d wear on her hand in a similar fashion.

Soon, the concept for “stacking rings” rolled back into style, and young shoppers rushed to get in on the trend — many of them poised to make their first fine jewelry purchases. There was Catbird, popularizing a fresh way in which to stack rings, along with a friendly price point and an unfussy, intimate shopping environment that appealed to a new generation of fine jewelry consumers.

“I was working in the store and this woman came in from Ohio to specifically buy a first-knuckle ring from us. It was so far outside our typical customer and made me realize ‘This is rippling beyond our typical Brooklyn confines.’ I think we are becoming a little more than a 225-square-foot shop,” Plessner said of the business.

“That’s a good definition of a brand as opposed to just a store, and none of us had been thinking in those terms before,” Vardi added. Soon after her husband quit his job so she could focus on Catbird full time.

In a world where Millennial start-up fine-jewelry companies are making headlines for $20 million-plus rounds of seed funding, Catbird is unique in that it is a self-funded enterprise.

The company has already outgrown the 12,000-square-foot Navy Yard headquarters it moved into one year ago. This spring, Catbird will double its operations by another 12,000 square feet — moving its fulfillment and logistics team to a new floor in order to make room for 28 more bench jewelers. What is now a team of 140 is expected to grow to 200 by the end of next year. The expanded space will also include video conferencing rooms — allowing the company to hold private shopping appointments with consumers outside New York via FaceTime.

It’s a format that makes sense for a company whose lackadaisical social media voice has made it something of a trustworthy friend for young fine jewelry consumers. “The feeling we want you to have when you come into the store — warm and welcoming — we can do that on social media, too, with a pretty low lift,” Plessner said.

The company was among the first fine jewelers to sell online — launching an e-commerce platform in 2005. It was also a pioneer in the piercing renaissance — quickly reacting to a growing trend for young women to artfully pierce their ears to accommodate a battalion of tiny studs — helping popularize a now-industry standard for “piercing parties” as a way to provide experiential retail. It’s latest advent are “welding parties,” where jewelers sit in-store to solder permanent gold bracelets to the tune of $94 a piece.

It makes sense that after being there for a consumer’s first online jewelry purchase, an ear piercing, maybe a present to themselves to mark a birthday or promotion, that Catbird would then become a de facto stop for Millennials looking to buy an engagement or wedding ring.

The company has gradually grown its love and engagement offerings with designs from third-party labels as well as new pieces from its own line — something that, again, “happened by accident,” Vardi said. “It happened organically because people trusted us,” she added.

The company opened a tiny “Wedding Annex” showroom in Williamsburg in 2015 to host private appointments and is relied upon for its democratic approach to ring shopping — seeing no purchase as too small or unworthy of its occasion. The store’s average engagement ring purchase comes in around $5,000, but often sees purchases for $300.

“We have in store $1 cigarette pencils and engagement rings at up to $15,000. It’s a wide price point inside of that. We think about everything as much as we do that engagement ring and want someone to be able to purchase something anywhere on the spectrum,” Plessner said.

The brand’s delicate perspective on jewelry resonates because “it’s so easy to wear and effortless. You can just leave it on, it’s not fussy — you can buy something for $44 and buy something else later, it’s an easy way to approach jewelry without a lot of pomp and circumstance,” Vardi said. “It’s a tiny easy spark of gold and luxury, it’s a lovely treat you can have your yourself that’s not super flashy and feels personal to you.”